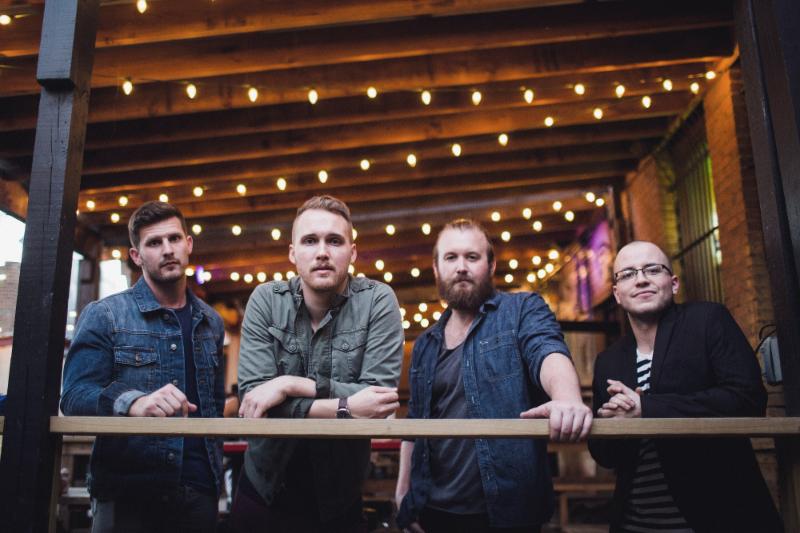 Dallas’ indie-rock outfit Valise has unveiled a new video for their single “Clover” partnering exclusively with Yahoo! Music for the premiere Wednesday The video, which was directed by C&I Studios and edited by Aaron Marsh conveys an introspective message that goes deep into the mind of a performer. As lead singer Vince Penick states:

“It’s sort of two videos in one. Obviously, there’s the performance aspect of it, but the heart of the video is really in the projected footage. I edited it myself, from my own footage, in hopes of capturing everything that goes through your head when you’re on stage performing. You’re playing guitar, trying to look cool, and all of the sudden you’re thinking about this girl and why you wrote this song about her. It’s simultaneously chaotic and calming, and then it’s over in four and a half minutes, just like this video.”

Valise is an indie-rock quartet from Dallas, TX. Vince Penick, Jared Travis, Casey Newton, and Ricky Johnson met in school, but quickly ditched their studies to focus on making music together, and have since become nothing short of unstoppable. Their songs “Dialogue” and “Charlie Gray” have been featured on ABC Family’s Chasing Life, and have had national recognition by The Huffington Post and MTVu. In Spring 2015 they released their debut album Young Bloomer, hosted exclusively with Spotify, and followed it with a relentless touring schedule. After supporting Copeland for their spring headline dates and a nationwide headlining tour this summer, Valise will be on the road this fall starting with a slew of headlining dates before hitting the road with Macy Gray. The track “Clover” recently became available on Spotify with two remixes by Jon Santana and Chapped Lip that can be streamed here.

Head to YouTube to catch Valise’s music video for “Clover,” from the album Young Bloomer. Follow Valise on social media to keep updated on their tour and new releases.

About Valise:
For some, making music is not just a passion but an incurable condition. When Vince Penick, Jared Travis, Casey Newton, and Ricky Johnson left the Dallas music scene behind and went their separate ways for college, they thought they’d closed the book on that part of their lives. Music became nothing more than a pastime as they pursued their degrees and planned out their lives. But as with any incurable condition, the symptoms crept back in over time, and a full on relapse was inevitable.

One by one, they grew bored with their studies and the desire to create music strengthened. Songwriting began, impromptu jam sessions became a regular fixture during breaks from school, and before long, music was the focus and college was a distraction. The next part was simple: drop out and start a band. Dallas welcomed them back with open arms, and Valise was born.

After a few preliminary shows, the freshly committed lineup traveled to The Vanguard Room in Lakeland, Florida to write and record their debut album with producer Matt Wilbur. The result was Young Bloomer, Valise’s eleven-song love letter to music that pulls influences from about a half-dozen indie sub-genres, showcasing the band’s versatility as they seamlessly switch back and forth from buzzing guitar riffs and pounding rhythms to subtle soundscapes and melting synthesizers. “We could never quite agree on what the particular sound of the album would be. We had so many ideas and wanted to try so many things, so we decided to simply follow our instincts and influences wherever they took us,” explains lead vocalist Vince Penick. “If the album comes across slightly genre-wandering, that’s fine with us. We’ll take that over monotony any day.”

Bringing the new album to life on stage was exciting and challenging, as each band member extended themselves to cover a new range of sounds and instruments for the live show. “It’s a strange feeling, having to learn how to play your own songs, but we had a lot of fun working it out and developing our live sound,” says guitarist Jared Travis. “We bought a few new toys to work with and a couple of us had to become multi-instrumentalists to make it all work.” Their unforgettable energy, dynamics, and faithful adaptation of each song makes “Young Bloomer” as much of a live experience as it is a studio album. Spending most of the last year touring and on the festival circuit, Valise has been honing their craft, both headlining and playing alongside Death Cab for Cutie, Local Natives, Dawes, Family of the Year, and Copeland.

This fall, Valise will be joining Macy Gray as direct support for her headlining US tour. Tickets and info available at ValiseMusic.com