Home / Album Reviews / The Cla-Zels – Set Your Ray to Stun 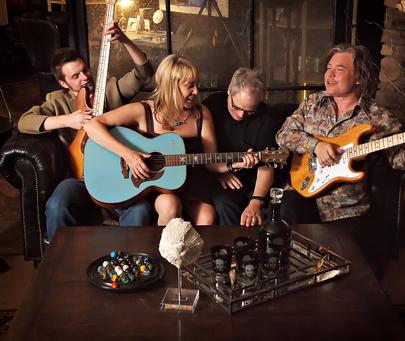 The Cla-Zels – Set Your Ray to Stun

The Cla-Zels – Set Your Ray to Stun

I cannot believe how long it’s been since I heard a good rock n’ roll record. I review a lot of music week in and week out, and looking back over the last 5 years at what’s landed in my in-box I’ve noticed a disturbing trend. Music seems to be steering away from a vocal driven primary to more of an electronic based primary. Music also seems to be delivered much louder these days than it used to be – not in a good way either. I guess many feel you are not capable of turning up your volume knob so they’ve done it for you. Please I don’t know how much more I can take.

So enter The Cla-Zels a rock band from Cincinnati who just released their latest release “Set Your Ray for Stun.” Band members include: Jason Erickson- Lead Guitar / Vocals, Joanie Whittaker- Rhthym Guitar / Vocals, Chris Barlow- Bass, Brian “Gigs” Baverman- Drums. The Cla-Zels are a straight blues/rock band with a contemporary almost classical 70’s feel. Influences include: The Eagles, Grace Potter and the Nocturnals, Fleetwood Mac, Johnny Cash, The Beatles. It has original songs reminiscent of the rocking-blues dund-of-the-70s with songs written similar to the style of all of the above bands with a contemporary surprise like The White Stripes. Right from the start Whittaker and company provides some emotional driven music for this classic yet distinctive style of rock music. By the way it’s vocal driven ‘Stone Mary” is the album’s first track and, from the rocking guitars, right through to the vocal touches and guitar work, the result is perfect setting for this band to start things off with. Both Whittaker and Erickson deliver crisp and smooth voices. If I had my way I would have Whittaker do all the vocals with an occasional background from Erickson. Make no bones about it this is a tight and experienced band. With fading classical vocal pop influence over the years, there’s possibly a nod in the direction here from Brody Dalle and Tine Weymouth as well. My favorite track “I Am Real” describes that feeling of pure honesty and excitement as one journey’s into the truth. “Ben Franklin” is another engaging song and, lyrically, spot on and emotionally engaging music that is clever to say the least. All pieces provide humorous tones about love, loss, distraction, and trying to stay fully present in a rapidly paced and changing world. There’s an almost 90’s sound to the title track. I’m not sure that I’ve got this right, but it sounds as if Whittaker and the gang are singing about life and some of the valuable lessons on the grind, but with a positive outlook about the road ahead. It’s definitely more Rock based than Blues or Rocking-Soul based but I liked the tasty guitar work from Erickson because it is captures the true Americana Rock Soul, despite the somewhat flashback sound. You have the almost noise drone of shoegaze and emo mixed music on the radio today with the over saturated pulse of new wave and alternative music, all the while this album is a breath of fresh air with a force of inspirational lyrical content and true to form emotion keeps it alive yet humble as it breathes over your speakers.
This intriguing 12 Track collection track delivers good song after good song and comes at you full board. All song present a wide range of instrumentation and syncopated rhythm section rounds out the overall accompaniment. Whittaker and Erickson are both capable singers and both have the prefect voice for this style of music. A bit laid back not trying too hard, in the pocket feeling perfectly comfortable in her skin she draws out the words with a dramatic quality that is almost like the band “X.” Speaking of which if I had to compare her to anyone I’d say she’s a modern day version of Kim Gordon (Sonic Youth).

Like I had previously mentioned I cannot believe how long it’s been since I heard a good record – until today. When all is said and done “Set Your Ray to Stun” is a classic return of good rock and it’s long overdue. This is highly dynamic music in which the glue that binds it sometimes seems to be made of opposing forces, yet it comes together to form a perfect bit of symmetry and style. Bottom line: Sometimes it your destiny to walk with into the unknown, not sure of the outcome, but with your head held high and a microphone in front of you. I also get the feeling Whittaker is not afraid to be herself in a dark and sometimes superficial modern world. Sometimes you got to relax and not worry about things. This is what the Cla-Zels are all about.