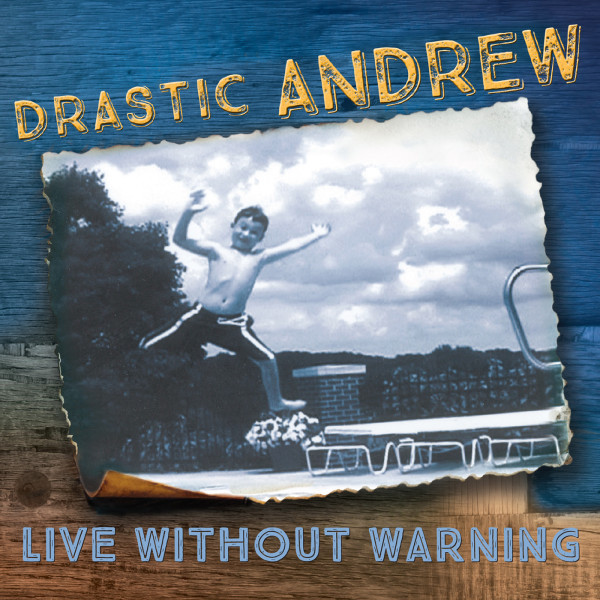 The title alone might throw you. I saw Live Without Warning and, without any previous knowledge of Drastic Andrew, feared that they might be some pie-in-the-sky collection of optimists peddling affirmative pop rock anthems no deeper than a bird bath. However, once you start listening to Drastic Andrew’s third full length album, it becomes quickly clear that we’re in the hands of capable stylists who may trod familiar thematic ground, but have nonetheless discovered new ways of expressing timeless truths. This New Mexico based five piece isn’t a bar band throwing together a few originals so they can promote an album at their live gigs. It’s apparent that Drastic Andrew is serious musicians and performers, but their songwriting is the obvious product of tremendous talents and dedication.

“Now” bristles with pared-back guitar muscle and vocalist Andrew MacLauchlan’s slightly off-kilter vocal creates an interesting percussive counterpoint. The pop-influenced “Every Minute of the Day” and the album’s title track serves notice that Drastic Andrew are capable balladeers who resist any temptation for sliding into pure schlock and are quite at ease with deeply felt and carefully crafted slower pieces that stress their intimate side. MacLauchlan’s clear baritone is the guiding force on nearly all of the tracks, but drummer Michael Chavez and bassist Noah Baumeister form an impressive rhythm section that offers the band a remarkably solid foundation. The album boasts some impressive rockers like “Alien Creature” and “Walking with Me” that affords them ample stage to shine. The former is an impressively composed meditation on the classic loner figure filtered through a sci-fi prism while the latter unleashes a memorable blast of Chicago inspired electric blues. “Evolution” follows a more strictly indie rock vibe than other tracks, but its laced with the same country and pop influences touching every song on the record.

“Pedestrian Love Song” and “Humble” find Drastic Andrew exploring a wider lyrical canvas than on other cuts and succeed. The deliberate tempo and lush musicality of the former elicits a yearning, even tender vocal from MacLauchlan while the latter is a bouncy, stripped down character study reaching, in its deceptively modest way, for some universal truths. “1812” has some unlikely vocal harmonies, tricky time shifts, and a bit of American history to boot, but the infectious pop groove gives the musicians a chance to stretch out and shine individually. “Plunder Away” is a bug-eyed slab of R&B influenced rock and roll that Drastic Andrew carries off with breathless confidence. The drumming never relents and the inclusion of brass sounds adds a new sonic dimension to otherwise simplified backing.

You’ll hear few albums better than this in 2015. Drastic Andrew’s new set embodies the best about rock and roll past, present, and future. Their subtle genre-hopping never sounds unnatural or affected – this is a band with many irons in many fires and they each burn with equal heat. Live Without Warning is superb from beginning to end and one finishes listening to it certain that the best is still to come.