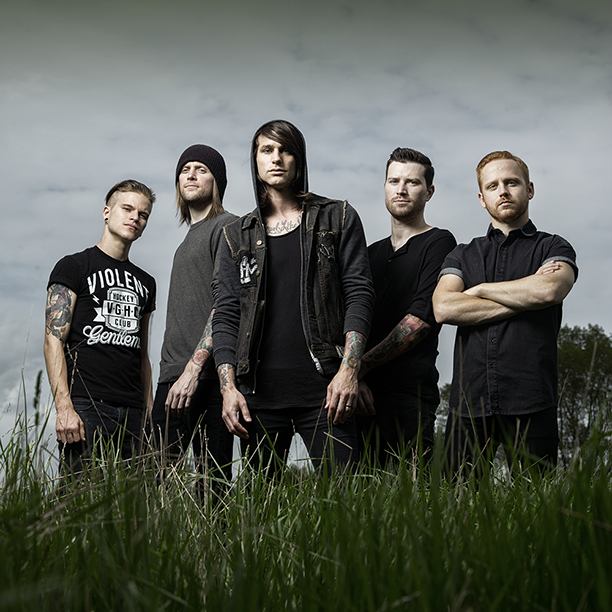 Album Review: Blessthefall – To Those Left Behind

Fearless Records’ own, Blessthefall released their latest full length album titled, To Those Left Behind. Today, October 20th, the Arizona natives will be launching a new US tour to promote the album. The metalcore quintet is comprised by Beau Bokan on vocals, Eric Lambert on guitar and vocals, Jared Warth on bass and vocals, Matt Traynor on drums, and Elliott Gruenberg on guitar. To Those Left Behind is the the fifth release for the band and they have created eleven tracks that give voice to dark and raw emotions.

The album opens with a haunting sharp violin in “Decayer” that leads right into the heavy, hard-hitting drums and guitars that has made Blessthefall a staple in the metalcore scene. Bokan, Lambert, and Warth have an interchange of lyrics that create a sense of conversation amidst the screaming.

“Walk on Water” is the second song off the album. Right from the beginning it is in your face and makes you focus on what’s playing. The construction of this song allows for all the members to radiate their individual talents and make it a fun tune to rock out to. There are aerial-like melodies in the chorus that balance the heaviness throughout the entire song.

Continuing with the theme of water “Against the Waves” has brief moments of what seem to be punk-like drumming sequences that liven the song and will be sure to fuel mosh pits everywhere. The deliberate jarring guitars and bass go hand in hand with the clean vocals in the chorus, permitting the screams and growls to stand out even more on their own.

A completely different approach was taken with the sixth track, “Looking Down From the Edge”. Accompanying the guitars is a digitalized effect that immediately makes the album go in a different direction. The breaks, harmonies, and instruments are sharp and clean. The typical screaming and growls are at a minimum and demonstrate a contrasting side to Blessthefall.

The surprises continue with “Keep What We Love & Burn the Rest”. This song has a slow tempo, with a very pop-like composition throughout. There is no screaming, growling, or metalcore influences anywhere and it was actually quite refreshing. At the middle of the album, this song allows for a reprieve that makes you embrace this record even more.

Closing To Those Left Behind, is the final song in the album called “Departures”. Despite having the elements that have made this band standout in the genre, this last track has airy qualities with poignant lyrics to go along with it. The record started out strong, was diverse, and finished out making me want to see Blessthefall live for myself.

Make sure to check out this band when they stop by a city near you. For more information on Blessthefall check them out at:

Tags Blessthefall Metalcore To Those Left Behind Tour

Concert lover, music fanatic. If it sounds good to me, the rest doesn't matter.
@njaziaddict
Previous An Interview with Hudson
Next Once A Tree premiere their Haunting new video ‘For You