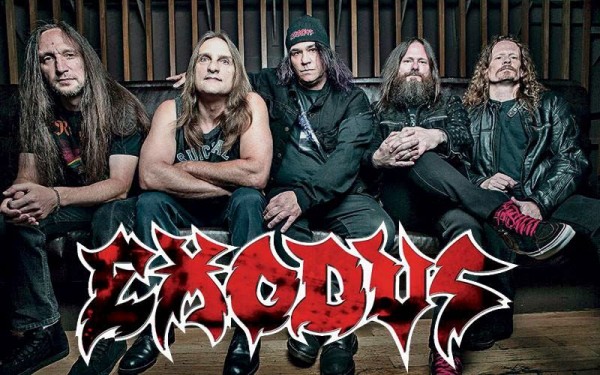 Thrash metal giants EXODUS will headline a European tour in early 2016 with special guests to be announced soon! The tour currently includes 30 stops, kicking off on February 25th in Birmingham, England and ending in Bochum, Germany on March 31st.

EXODUS frontman Steve “Zetro” Souza wants to see you in the pit: “For all our friends across the pond, look out for another violent EXODUS style tour coming to crush Europe! We are still out in support of latest album Blood In, Blood Out, and we want to see the pits at all these shows absolutely blow the roofs off ! See ya soon, horns up Europe,”

In just under three weeks, EXODUS will head out in support of headlinersKing Diamond on their forthcoming “Abigail In Concert 2015” U.S. tour! The tour kicks off on October 29th in Denver, CO and will feature King Diamondperforming their classic 1987 album Abigail in its entirety each night. In addition, EXODUS has added several off dates throughout the tour.

See below for all current tour dates. Tickets are on sale now for both tours, so visit www.EXODUSATTACK.com now for details and to purchase tickets.

EXODUS is featured in the new mobile app Metal Hammer: Roadkill – the first mobile game from TeamRock! It’s a rhythm-action game where the music spawns the bad guys, in time to the music itself. So you can play the loudest tracks and the heaviest numbers, while taking down demons, straight from the depths of HELL. Your job is to kill ’em all, save the planet, fight the darkness and generally act like a hero. You’re equipped with a mighty metal hammer, to crush, smash and destroy an army of creeps, fiends and freaks. The music comes courtesy of the iconic heavy metal label Nuclear Blast. So now, for the first time, you can kill the bad guys, accompanied by additional bands such asSuicide Silence, Epica, Sabaton, Hammerfall, Accept, Immortal, Devilment, Vader and Threshold – with even more to come. Metal Hammer: Roadkill will be available on October 15th for iOS and Android mobile phones and tablets. It’s Free! FREE! Get it. Download it and LET THEM EAT METAL: http://www.teamrock.com/roadkill

Previous Watch SHINING’s Nerve-Racking “Last Day” Video, Even If You’re Afraid of Heights
Next Album Review: Coheed and Cambria – The Color Before The Sun