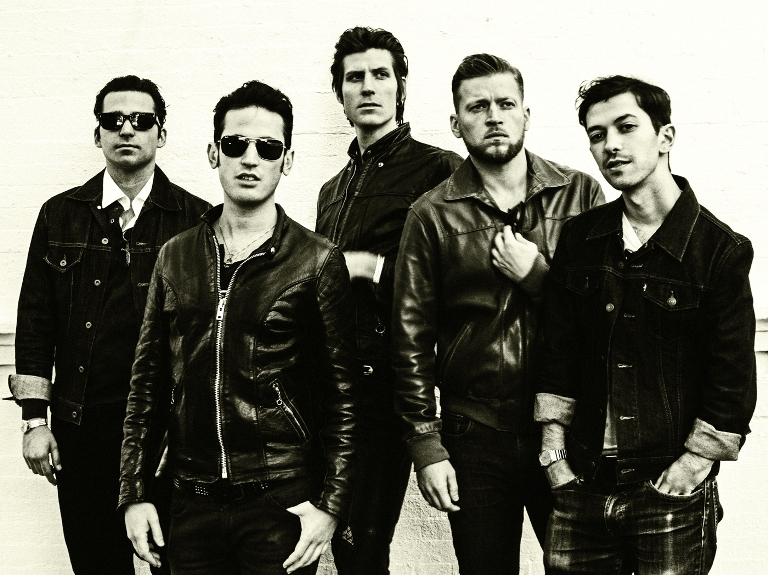 It’s a very rare thing to find an album that is start to finish a musical masterpiece, but Jeremy and the Harlequins debut LP American Dreamer checks off all the boxes. Catchy, cool, retro inspired, and quality musicianship all help to make it one of the best releases of 2015.

The whole musical experience begins with “Trip into the Light” which boasts a shiver inducing, dripping with seductiveness, vocal performance from lead singer Jeremy Fury. The definition of slick, with screaming electric guitars and a back alley Stray Cat swagger that exudes a level of confidence, the track effortlessly walks the fine line between retro and modern all with a “Be Bop a Lula” vibe. “Cam Girl” sounds like something that could have been released by Buddy Holly (Think “Peggy Sue”) but has cutting edge 21st century lyrics in what can be described as a love/ lust song in the age of online dating. With lines such as “your profile came up on my Macbook screen” there is no mistaking this is a tune set in the current world but set against a late 50s background. With a round of handclaps that start off the tune, and the catchiest chorus on the entire album, its infectious melody is guaranteed to play on a loop in your head. “Settle Down” is Jeremy and the Harlequins version of “Blue Suede Shoes” first recorded by Carl Perkins and cemented itself in pop culture by Elvis Presley. The song even references the King and Perkins lyrics. Under two minutes, the song packs the most punch on the entirety of American Dreamer and goes by in a hot minute. Literally. It’s 50s rockabilly at its finest and is an immediate toe tapper, sure to get even the shyest wallflower out on the dance floor.

Every track is a winner, but Jeremy and the Harlequins are at their peak on single “Right out of Love.” Starting off with guttural grunts that could have come straight out of Sam Cooke’s 1960’s hit “Chain Gang,” it quickly melts into a dreamy, but biting, ballad that one can imagine the Fonz bumping the jukebox at Arnold’s to hear as he dances with his latest gal. Fury’s vocals are pitch perfect, wailing and sensitive, laying the truth on the line for listeners. It’s gritty and pure at the same time which just adds to the magic of the track. Get ready to swoon even harder than you’ve already swooned toward the end of the song when Fury riffs in his upper register. Though it is a song that is about falling out of love, if there is one standout track for anyone to fall in love with it, this is it.

“White Star Bright Love” is also noteworthy as it is probably the most experimental piece on American Dreamer. It has an interesting melody and an overall jangle to it with a Beatles feel. In fact, it seems just like the type of song one can picture John Lennon singing with the fab four. The lyrics are fun and playful, and coupled with lush vocal “wah’s” up the throwback factor of the song. The only drawback to the track is that unlike the other songs on the LP the song title only appears at the very end, which may lose itself in the shuffle of other well identified tracks.

The album ends with the longest song “Sunlight in the Rain,” and while it is a fine ballad with a slightly flamenco rattle sound, and as always a star making vocal showcase from Fury, especially at the bridge which perks up the song quite a bit, it feels like a bit of a letdown. However even though this LP ends on a whimper, American Dreamer is a sheer delight to listen to and is sure to bring back some memories to those who spent their teenage years in poodle skirts and letterman jackets sharing milkshakes, and make those who were not alive in the 50s long wistfully that they could travel back in time.