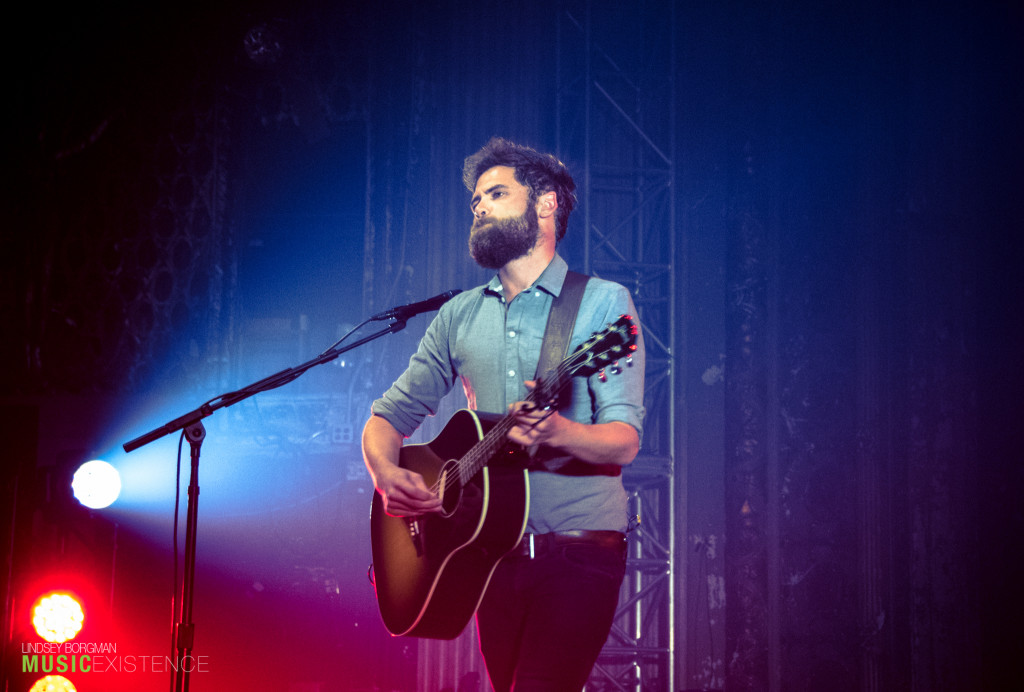 Passenger and opener Gregory Alan Isakov put on an impressive show Sunday night at the Keswick Theater in Glenside, PA. Up first was Isakov, who has recently opened for some other impressive artists such as: The Dave Matthews Band, Iron & Wine, Of Monsters and Men, and others, as he tours North America in support of his new album: The Weatherman.

Isakov took the stage is a somewhat reserved manner, and played his indie folk to an already packed house. While Isakovs voice and playing are inspired, what really stands out about his music is his lyrical content. The storytelling sensibility of his folk background mix with a kind of lyrical poetry that you can almost see as you listen to him play. His is the kind of music you can imagine perfectly scoring the background of some epic movie of love and loss. He’s only got a handful of shows scheduled for the rest of the year, in the west coast. Don’t miss out, tickets can be found on his site Here.

After a short intermission, U.K.’s Passenger, or Michael Rosenberg, took the stage, and proceeded to steal the crowds heart with his equally impressive storytelling. Philly was fortunate enough to be the last stop on Passengers North America leg before he heads off on tour with Ed Sheeran in Australia and New Zealand. Passenger probably also falls into the folk category, but falls closer to the indie-rock spectrum of that category. His set was mesmerizing, which is impressive, given that he’s just one man with a mic and guitar. Be that as it may, the pacing of the show, and the crowd interaction between songs was masterful, at a pro level but still somehow completely genuine. I knew going into this show that I was going to love the music, what I wasn’t prepared for was the emotional, engaging experience that is a Passenger show. I laughed, I cried, I mostly smiled. Early on, he joked that “Americans make sounds that the English just can’t. You all, like, meow.” He would spend much of the rest of the night, earning and encouraging some uniquely Philadelphian sounds.

Like Isakov, Rosenberg has a keen storytelling ability that kept the audience both laughing and listening, enraptured by the stories and antics he shared between songs. One such story involved an Australian man Rosenberg had meet while on tour in Scandinavia, that inspired the song Traveling Alone. This older gentleman had been planning, along with his wife, a world tour once their children were off to college. The mans wife passed away before they could leave, and he decided to go out on his own to honor his wifes wishes to experience the world. “Well, I’m loving a shadow, I’m trying to catch the rain. But I never heard silence ’til I heard it today.” The song then merges with the story of a woman he encountered, who had been left by her man for a younger woman. “Oh, and I loved him to his bones. Now I’ve lines on my skin, and he’s traded me in. He left me traveling alone.” He recounted the memory much more eloquently than I have, however it, and the song were beautifully haunting.

Passenger went on to tell us that his dad had been born in New Jersey, and that they would spend vacations there when he was young. They would listen to Paul Simon together, and so that, when he was able to cover Sounds of Silence so close to where his memories were borne, it made him thankful. If he was thankful to play the beloved song, the crown was even more so to hear it. There’s a fan video of it on YouTube. If you’re a lover of the song (and who isn’t) you should go watch it. Its really rather a moving version, and a great way for Rosenberg to show off his impressive vocal range.

It was an impressive night of music and as it came to an end, Rosenberg thanked the crowd profusely for being so attentive, asked everyone to put away the cell phones and join him for Scare Away the Dark by harmonizing along with some ‘oh’s’. Throughout the song, Rosenberg kept pressing us to sing louder, and, after ending the song and leaving the stage, the crowd got progressively louder with the vocalizations until he came back out for a two song encore. Included was a cover of Springsteens’ Dancing in the Dark, where he switched it up, asking everyone to get their phones back out, turned on, and up in the air.

I was fortunate enough to catch up with Passenger after the show and ask some questions. He was gracious enough to take some time before leaving, to chat, after having waited to greet the crowd of maybe 100 fans at stage doors, signing autographs and taking pictures. What impresses me even more about this talented musician is the gratitude he displays for his fans. Upon researching, I realized he took the time to meet these Philly fans the night before he would fly halfway around the world for his show with Ed Sheeran in Brisbane the next day. Here’s one fan who hopes he and his crew managed some sleep, and that the rest of the tour is as remarkable as this one. Here’s what we chatted about.

ME: So you talked about finding inspiration for your lyrics in a few downtrodden individuals, have you ever heard from any of those people?

MR: No, no, It’s funny, I did a radio interview, I talked about writing in New York, and they had some little campaign about trying to find this guy. You know, cause like, it would be cool, right? You talk to a stranger at a gas station and you find out he’s a songwriter. Um, I mean, so many of these people are sort of, probably on the periphery of things and I’m ever likely to discover it, I guess. And at the time, when you’re having these moments, you don’t think to go, hang on, I might write a song about this, give me your email and I’ll send it, you know what I mean? So who knows. I’d like to think that maybe, maybe one day.

ME: (Because Music Existence is everywhere) You’ve toured the world extensively, are there any cities that stand out to you as special?

MR: Um, I mean it’s tough, I’m amazed that I can go out to so many countries and so many cities. It’s opened the whole world up, it’s incredible. I have to say, Montreal is an amazing place to play, they’re so passionate, so loud.

ME: More so than Philly fans?

MR: Well, tonight, just cause it was a smaller theater, it was more of a subdued thing. Philly is always great, and I’m not just saying that, it always is. I just feel bloody lucky to be able to get everywhere.

ME: You joke about only having one hit song, in Let Her Go, do you have a favorite to play?

MR: It changes, really, I love playing new songs cause they’re relevant, they feel fresh, you feel every word. I think once you’ve played something so many times… you still want to perform it every night , and mean it every single night but you know, it’s embedded. So I think when they’re new, they’re really special, yeah.

To catch some of those new songs, check out Passengers new album (and his other six), Whispers II on Itunes or at his site, here

I love light and music. My favorite is when I get to combine the two.
Previous Album Review. David Cook: Digital Vein
Next Renowned musician / storyteller John McCutcheon live at Rockwood Music Hall Stage 2 on October 25