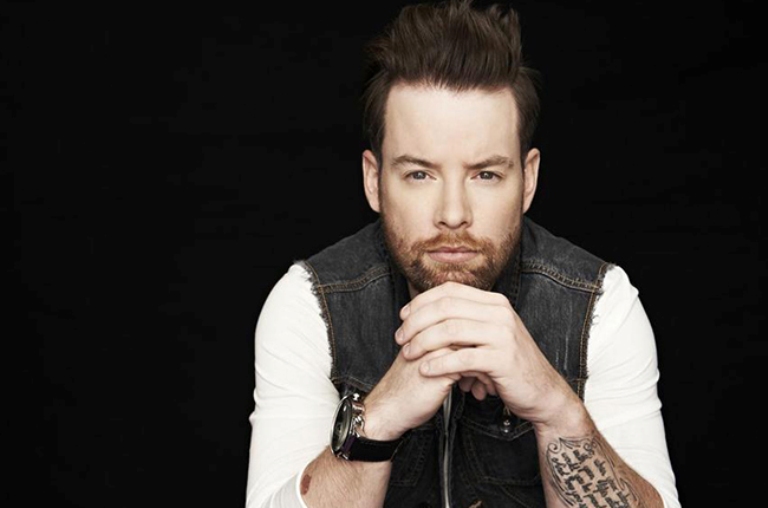 It has been four years since David Cook released an album, but now he’s back with Digital Vein, an LP that allows Cook to explore some new sounds while staying true to his pop/rock self, full of lush ballads and a “wicked” cover.

The leading single “Criminals” starts off with a pulsating drum beat and dazzling electric guitar. Cook’s voice varies between graveling growls urging “victims” to “break out of this prison cell” to effortlessly sailing into a more power pop, anthem-like chorus. It’s empowering and with a slight edge, and is the most polished and radio friendly track on the entire album. If there is one song that is going to get lodged into your head off of Digital Vein, it is the infectious and delightful “Criminals.” Elsewhere on the LP, Cook finds himself crooning a classic romantic ballad or two, but none is more successfully written, performed, and produced than “I’m Gonna Love You.” A David Cook, heart on sleeve ballad, would not be complete without a light guitar touch, a tinkling piano, and swoon worthy lyrics such as “every crime that love commits/ brings you right back here to this.” The chorus is incredibly love stricken, and is the musical embodiment of the heart eyed face emoji. As Cook sings “I’m gonna love you endlessly” listeners will have a hard time not falling under the tender side of his love spell. Along the same lines, listeners are in for another slow tempo treat as the album closes with “Home Movies (Over Your Shoulder).” Starting and ending with the sound of a projection wheel whirring helps set up a throwback tale that cook weaves, interspersed with poetic lyrics such as “chasing ghosts in the hotel parking lot” and “just another old home movie/no sound but it’s deafening.” It’s content is dark as Cook mentions he’s “hanging on like a death row innocent “ and there are mentions of alcohol but it is those moments which leave a permanent and memorable sting on listeners hearts.

Perhaps the one track that steals the spotlight from all the others is Cook’s cover of Chris Isaak’s “Wicked Game.” For a man who was known to take cover songs to another level while he was on American Idol, it’s good to see that part of Cook’s repertoire still alive and kicking. With minimal instrumentation, a few piano chords start off the track, “Wicked Game” is imagined as an even darker song than was originally written. Allowing one to focus on Cook’s vocal performance and the deep lyrics itself, Cook elevates the tune into a maddening and twisted concoction that is impossible to turn away from. The ending is so intense and raw that one can’t help but be moved by this stunning cover.

One of the most impressive feats Cook displays on Digital Vein is his willingness to step outside of his typical sound and try something new. On “Better Than Me” bubbling instrumentation sounds like something out of the 80s pop scene, maybe something Genesis could have dreamed up. “Kiss and Tell” has an electronic dance hall feel with a touch of industrial and a chorus that is reminiscent of Fall Out Boy. But most successfully is the piano driven “Laying me Low,” which sounds like a tune that fellow American Idol winner Kris Allen could have easily cranked out with toe tapping verses, but full on Cook infused belting chorus. Testing out the waters of more structurally different tracks is something Cook embraces 150 percent on this album and when he commits, it brings out a side to his artistry that his fans may not have heard before.

There are a few songs that seem as if they bring nothing new and innovative to the table such as “From Here to Zero” which feels as it could have easily fit on Cook’s last album This Loud Morning. There’s not much left to offer up on the starting track “Heartbeat” either which again feels like a regurgitated This Loud Morning track. It’s not that the tunes are bad but that they are safe, too safe, for someone like Cook who we have seen time and time again push the musical envelope on his own sound.

As a whole, however,It’s nice to see Cook branching out on Digital Vein while still never abandoning his signature sound. Though there are some misses on the album, there are far more hits. And if you want an extra special treat get the deluxe version for a few extra songs and some more time spent in Cook’s mind. Overall, solid and surprising, Digital Vein is sure to please any Cook fan who has followed him throughout his career.