Home / News / SOILWORK and SHATTERED SUN Kick Off “We Sold Our Souls to Metal” Tour with SOULFLY and DECAPITATED this Wednesday! 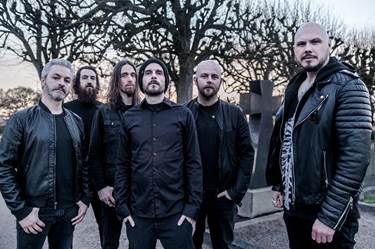 SOILWORK and SHATTERED SUN Kick Off “We Sold Our Souls to Metal” Tour with SOULFLY and DECAPITATED this Wednesday!

SOILWORK and SHATTERED SUN will kick off the “We Sold Our Souls to Metal” U.S. tour with headliners Soulfly and special guests Decapitated this Wednesday, September 30th in Los Angeles, CA! Both bands will perform new songs off of their recent releases. The first leg of the tour hits several North American cities, coming to a close on November 1st. For more information and to purchase tickets, please visit www.soulfly.com.

Fans can upgrade their tour experience with SOILWORK VIP packages via www.soilwork.soundrink.com – the packages are just $50 in advance or fans can purchase at SOILWORK’s merch booth.

VIP’s will receive:
-Meet & Greet access
-Individual/group photo with the band
-Band autographs (unlimited items)
-Limited edition poster
-VIP laminate with lanyard (must purchase ticket separately for show entry)
-Patch
-Guitar pick pack
-30% discount coupon for online store and an entry to win a custom painted ASG guitar signed by the band with the The Ride Majestic artwork (winner will receive a call from the band to be notified also film the call and share on social media).

About SOILWORK’s The Ride Majestic:
Late last month, SOILWORK released their 10th studio album, The Ride Majestic, via Nuclear Blast Records. The album charted on Top Albums lists in several countries, including #20 (Rock) & #26 (Indie) in the UK, #22 (#4 Rock/Metal) in Sweden, #30 in Germany, #37 in Austria, #45 in Australia, #49 in Switzerland, #55 in Canada, #103 in the United States and #107 in France. Get The Ride Majestic Here: iTunes: http://nblast.de/SOILWORKMajesticIT

After this tour, SOILWORK will head to Europe to tour with Hatesphere. Visit the sites below for more information.