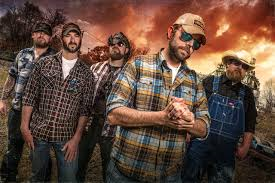 First and foremost, Zach Linley and the Rebel Daredevils are a testament to speaking your mind and using your voice and talents to express your beliefs, your struggles, and the constant backlash received for doing so. Their Midwest values and principals shine throughout this album. They have a range of lyrics and styles that allow you to take a journey with them to the heart of not forgetting who you are and where you came from.

“Cold Dead Hands” has a fast paced, upbeat feel to it. It’s definitely a new sound to a classic genre. Zach Linley has a sexy raspy voice that reminds you a bit of George Straight with the deep gruff vocals that can give you goosebumps. This song almost has a “Devil Went Down to Georgia” feel to it with its quick drum beats, fast electric guitar and a ‘stick it to the man’ message that can’t be missed. This is definitely a ‘fire you up’ type song and I could see this one becoming a classic song that everyone knows and loves, just like “Friends in Low Places”.

“Don’t Forget”, is a song that has a getting back to your roots type feel, like the feeling you get when listening to “Sweet Home Alabama”. This one has a bit slower vocals but continues with the fast tempo with the guitar and drums which creates a new and different sound than the typical country genre you would expect. The lyrics definitely remind you not to forget where you came from and it’s a beautiful marriage between the lyrics and the music with a good solid moral message.
“Honkey Tonk Heaven”, is not at all what you would expect. Instead of a light hearted, fun loving song that has no real substance, Zach Linley and the Rebel Daredevils take you to a place that emphasizes the hard work and struggles that life throws at us all. It is still lively and fun but with genuine heart and character that everyone can relate to. This song also showcases the dynamic coupling between several different genres of music. There is a beautiful overlay of vocals, effective pauses and segues in this song that create a genuine emotional response.

“Sick and Tired”, takes you back to the country music before it became ‘Pop/Country’ but not so far back to the point of ‘Country/Western’ or ‘Bluegrass’. This one has a modern feel with the mix of the classic acoustic guitar and the flare and vibrancy of the harder electric guitar. “Sick and Tired”, has a slightly softer tone with the drums and hints of piano but the chorus still has a nice punch to it. The best part of this song is the moment with the raw vocals with just vocals and piano and a touch of slide guitar.
“What it Takes”, has an amazing intro that pulls country music into the modern day while still maintaining the classic country sound we’ve all grown to know and love. The lyrics paint a very positive picture that often gets lost in most country music songs. It’s a really nice change from the common tragic or sad songs that often come from this genre of music.

Overall, Zach Linley & the Rebel Daredevils are an impressive band not only because of their positive messages in the lyrics but also because of the amazing risks taken in turning a classic sound into a modern style. The band members, Jason Beck, Nate Van Vleet, Chad Sherman, Brandon Frederking, and Zach Linley himself are all astounding musicians with incredible talent and flawless execution. I have no doubts that this band will climb vigorously and very quickly to become a common name synonymous with the likes of Garth Brooks, George Straight and Willie Nelson. This band definitely deserves the 10 out of 10 rating I will be giving it.

Previous Gallery: The Fratellis and Grizfolk shake up your Friday night at Webster Hall in New York City
Next Interview With Ajay Mathur