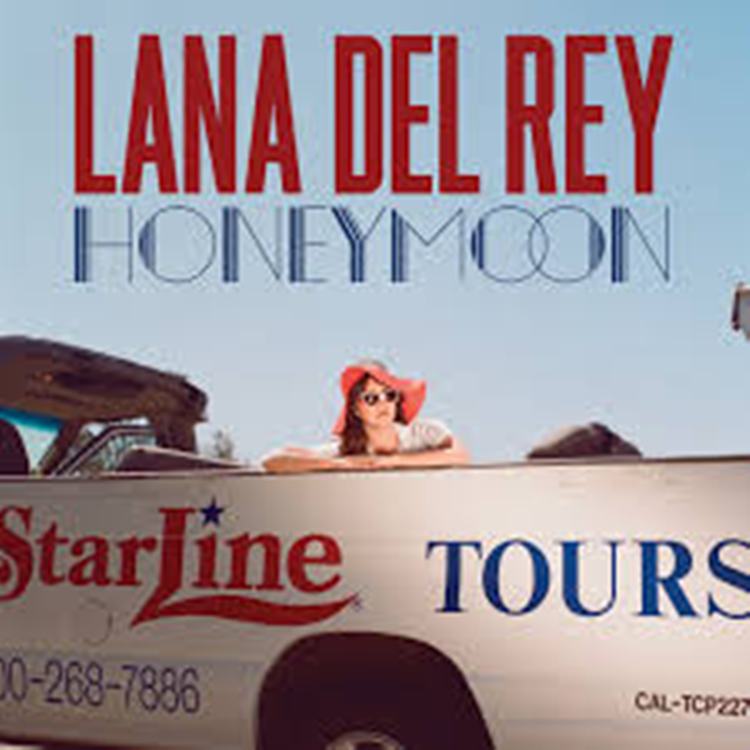 Let’s face it. Lana Del Rey’s Ultraviolence is a tough act to follow. When Del Rey teamed up with The Black Keys frontman Dan Auerbach studio magic was made, bringing a slight rock edge to her music. It was glorious and majestic and it’s no wonder it was met with critical acclaim. Anything Del Rey puts out after Ultraviolence will always be compared to that album. And while her third studio album Honeymoon, moves away from the sound that garnered her much needed respect from the musical community, returning back to her origins sans Auerbach, the album, though not at peak Ultraviolence quality, still impresses.

The title track lets listeners know that she is still the queen of tortured melancholy with its heart pulling orchestral background. Basking in her own sadness, Del Rey sings about “cruising to the blues” in a full cinematic landscape. It’s the type of track that sounds like it could accompany a faded black and white noir film. Though she is singing about what is thought of a as a generally happy occasion, one gets the feeling from the tone in Del Rey’s voice, that she may be singing wistfully about a story out of the past, looking back at a time and a love that has long passed.

“Music to watch Boys To” and “High by the Beach” bring back a slightly more upbeat Del Rey, even if is only tempo wise. In a sea of torch songs, these two tracks help perk up listeners ears. The chorus on both of these tracks are infectious and the closest Del Rey comes to successfully writing a catchy riff. These are the two most radio friendly songs on the entirety of Honeymoon, but that does not take away from the brilliance of them. As always, Del Rey paints picture perfect portraits in each of her tunes, setting the scene in such a illustrated way that one can easily see what Del Rey wants you to see, and feel like you are living your moments along with her.

The cinemascope movie quality comes into play heavily on Honeymoon. And when it comes to the most visual songs on the LP, one only needs to listen to “Salvatore” and “24.” The introduction to “Salvatore” feels as if you are listening to the beginning of a classic film as the credits roll. Del Rey comes across as a saddened Snow White songstress who is telling the world her personal tales of love and loss. The track does have Del Rey making some less than stellar rhymes, as her Italian lyrics are somewhat overshadowed by her repeated singing of “soft ice cream,” but it never loses its charm. Pairing this song with “24” is a stunning way to appreciate and digest the musical buffet Del Rey has set out before her listeners. And while “24” does not immediately follow “Salvatore” it captures the same flavor and is best showcased in close proximity. The track has a more grandiose and operatic vibe than usual for Del Rey, which is saying something. With a foreign influence, Del Rey spends nearly five minutes darkly recalling the days she has spent in bed with her “lying love” who also spends most of the day thinking about “murder and carnage.” There is no denying that Del Rey is a masterful storyteller, and cinephile , but never do the two cross most gloriously than on these two tracks. Yes, there are some clichéd lyrics in “24” such as “if you lie down with dogs than you’ll get fleas” but just as in “Salvatore” Del Rey makes it easy to look past those cringe worthy choices.

The highest point on the album is “God Knows I Tried,” a tune that evokes the tragedy and beauty of Ultraviolence. Even though she speaks of her fame and how her celebrity status has left her with “nothing much to live for” it is undeniably the most relatable song on the LP, especially when Del Rey sings soulfully “on Monday they destroyed me/ but by Friday I’m revived.” This is also a very wholly spiritual song, in the sense that after all Del Rey has been though, crying and lying, she still turns to her faith to look for the light to light up her life. Heartbreaking and uplifting at the same time “God Knows I Tried” is a pearl among a glistening sea.

Though a majority of Honeymoon is solid, there are a few setbacks. “Religion” comes across as mostly forgettable and unlike with her other songs the clichéd lyrics like “chips fall wherever they may” and “let sleeping dogs lay” are not as easily excused (but she does earns some bonus points for mentioning “Lay Lady Lay.”) “Swan Song” is just ok and gets lost between the moments of sheer genius on the LP, so bless Del Rey for ending on a cover of “Don’t Let Me Be Misunderstood.” Originally sung by Nina Simone Del Rey puts her own spin on the popular song melding both Simone and The Animals versions of the tune.

Overall, though not up to par with Ultraviolence, Honeymoon is still worth a good listening to as a masterful slice of nostalgic Hollywood and lost loves, sung the only way Lana Del Rey knows how.