Home / Album Reviews / The Nervous Germans – From Prussia With Love 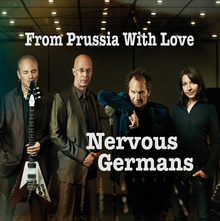 The Nervous Germans – From Prussia With Love

The Nervous Germans – From Prussia With Love

Kraut-rock in the 80s was a very special time for music. In fact, the German scene has produced some of the best, most criminally neglected rock bands of all-time (Neu!, Birth Control, Message, Ash Ra Tempel, etc.). The Nervous Germans were sort of a blip in time, scoring some recognition, airplay and a John Peel session. They had moment and kind of faded away. Out of nowhere, the band’s core members have returned for a surprising reunion and a new album From Prussia with Love.

Nervous Germans broke slightly from the traditional kraut-rock mode by laying off the prog and working with a more straight-forward rock/punk sound with tinges of country and blues, though they won’t offend German rock fans that cut their teeth on Neu! and the other greats. “Superstars (And Superheroes)” is brimming with blues and hard-rock but an understated hand for melodic guitar lines that pluck instead of riff it up. It’s a killer, catchy number with arena worthy choruses where you follow Grant Stevens’ every single word. A rollicking, 70s rock lick pumps “Liberation Day” full of vitriol right from the get go, and it soon becomes a showcase for Gary Schmalzl’s booming, sonic riffs and a tough rhythmic backbone. Soaring pop harmony vocals, fluttering melodies and a general sense of groove is maintained and milked from the first note to the last.
“Summer Rain” is equally as hard as its predecessor. A pounding drum fill relishes the toms and kicks while a distorted, electrocuted riff slowly rises to a seething climax. This cut has a snotty, angst-y vocal performance and slamming percussion from Sabine Ahlbrecht which recalls fondly of the Sex Pistols loosely knitted attack. The Germans have more melody in them though and know when to let cool ambience work up a good mood, especially driven by those dark, pulsing bass lines. “Living the Dream” feels like the workingman’s indie country/blues of the Violent Femmes; it has a monster radio hook going but enough spite n’ sneer to give it some much needed passion. Working in the same texture, “On Fire” pops and crackles with oaken, gnarled blues but has a more descending power chord arrangement than the prior track along with some of Stevens’ most accomplished vocal work of his career. This riff will stick in your head for eternity and the rhythm section ensures it never leaves the road.

“Happy Birthday Major Tom” has a certain 80s sound to it with sampled space transmissions before moving into a smooth, catchy New Order sounding arrangement driven by stop/start riff and a bumping bass groove courtesy of low-end slinger Micki Meuser. The chorale back-up vocals really complete that infectious 80s amphitheater sing-a-long with a great Cockney accent giving it plenty of identity. Beamed in from the 90s with more downhome twang, “Hey Mister Sunshine” melds post-grunge with an edgy authentic feel that still renders it a smash. “Modern People” isn’t far removed from the prior track but takes on a harder, syncopated drum beat with an indie, shoegaze guitar twang and light keyboard accompaniment lending deep space texturing. “In My Mind’s Eye” is an even darker shoegazer with a dub beat held down by real percussion and bass lines bathed in overcast and night sky. Closer “Paradise Lost” embellishes symphonic, soundtrack flourishes for an atmospheric triumphant that could have easily been part of the soundtrack to something massive like Gone with the Wind.

Really, this is an airtight record and a rare comeback album that delivers on its promise of a stirring resurrection. The music is deftly played, thoughtfully composed and full of subtle hooks and shades that merit repeat listening. Anyone into that significant German sound shouldn’t hesitate to see what the Nervous Germans have been up to.