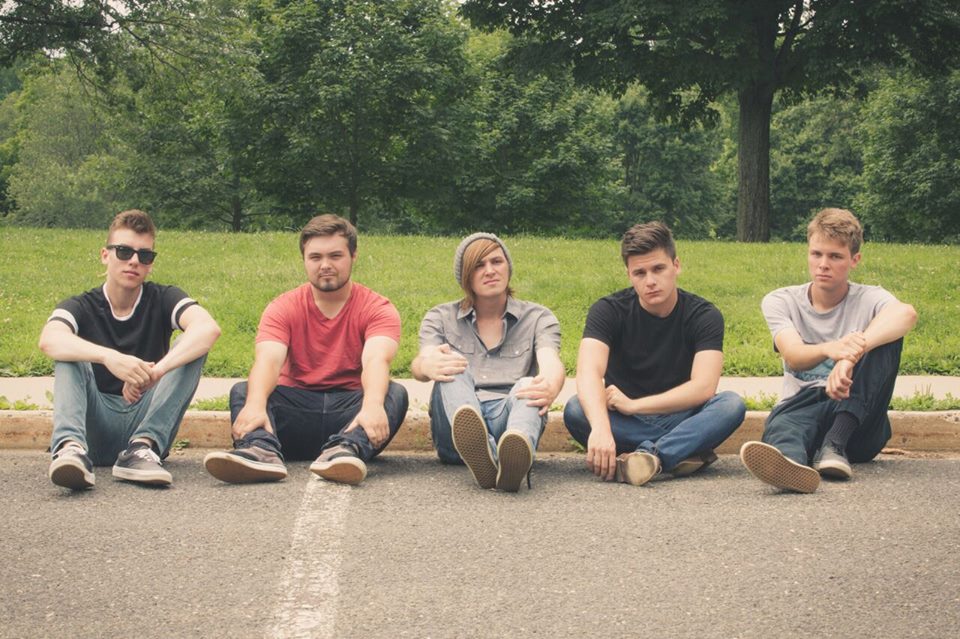 Hailing from New Jersey, The Stolen is a five-member band that was formed in 2005. Before their home-show set, Music Existence sat down with band members Dom Cuce (vocals), Rob Chiarappa (guitarist and vocals), Mikey McDonald (guitar), and Mike Chiarappa (drums). Bassist Kevin Smart was unavailable for the interview. The Stolen shared stories from their early childhood beginnings and musical influences, to crazy tour mishaps.

ME: How did you guys meet?

Dom: I met Rob and Mike when I moved from New York to New Jersey when I was like three years old.

Mike: We were next door neighbors.

ME: Who inspired you to be musicians?

Mike: My dad. (Points at Rob) Me and him are brothers. My dad has always been a musician so he kinda pushed that on us.

ME: Any particular instruments?

Mike: No, we tried and fooled around. He was always playing, so why don’t we try this.

Dom: I had to start singing so I could stay friends with them. Because, like, all of the sudden when they picked up their instruments, it was them going off 24/7. I’m like alright, seven years old I can’t be wandering the neighborhood so I either need to do something so I can hang out with them or be alone. I don’t know what made me start to sing, but I did. Now I’m here wanting to have friends…I wasn’t that desperate I promise.

ME: Who do you listen to? Who’s your favorite band?

Mike: We honestly have the generic answer, we listen to everything.

Dom: 1975! When we started off I was like nine, ten years old, so we were doing classic rock covers to like AC/DC, KISS. Listened to The (Rolling) Stones, Tom Petty, All Time Low, the Maine. The list could go on, we got everything in there. There’s Fetty Wap and Drake for sure in there.

ME: Being from NJ, how do think that’s inspired your music?

Rob: Jersey pride! We pump our fists when we write our music (everyone laughs).

Dom: This is like a general statement being from Jersey, I feel like you’re proud about your home state. More than I’ve seen other people.

Mikey: We have more time to write music ‘cause we don’t have to pump our gas.

Dom: That’s true when we’re waiting at the gas line, we write our music.

ME: Having formed in 2005, how do you feel your music has changed over the past ten years?

Rob: We learned how to play our instruments.

Rob: We started writing originals. We were a cover band and as eight through eleven years old you don’t have much to write about. Like maybe our goldfish died?

Rob: When I was fifteen-sixteen, the rest of the guys were fourteen, that’s when we started writing. It’s there that you learn the whole writing process, learn on your skill set.

Dom: As you grow up as a person, mature, it’s the same as a musician. Your music gets more mature, it’s what you want. When we were younger, I don’t want to say we didn’t nitpick as much but I guess you can sort of say that, our songs are more complex now. Because we’re older and more mature.

ME: Have you always been called The Stolen?

A big unanimous YES from the entire band.

Dom: Ever since we formed, in whatever elementary grade, it’s always been The Stolen.

Mike: And we didn’t change it, it came from the heart when we were young.

Dom: When we get bored we’ll get into the conversation, “imagine if we changed our name?” and we can’t because The Stolen is who we are. No matter what people think of the name, that’s what the people know us as.

Mike: We were The Stolen playing the fifth grade talent show.

ME: Any particular reason why it’s “The Stolen”?

Rob: There was a story and we always forget it cause it was so long ago.

Dom: I think we were just sitting around, and we couldn’t be called the band from Shepard’s School. We needed a name, because people would come up and ask, and we’d be like uh, I don’t know. We just thought The Stolen sounded cool and now we’re here. Being The Stolen.

ME: Any before show rituals?

Dom: We always have a chant.

Mike: Yeah, they always come by me.

Dom: We’ll have a little talk. I don’t think anyone knows that I do this, but I always bring two water bottles on stage with me. And before we start I have to take a sip from both bottles.

Rob: I disappear before shows.

Rob: I do like a walk around the venue. I don’t know why but I do.

Mikey: Mike and I hang out.

ME: After a twenty-two show tour, what do you guys look forward to the most coming back home?

Mikey: My mom promised me she would change my sheets when I came back, they’re not changed.

Mike: My mom changed my sheets when I came back.

Dom: I changed my sheets ‘cause I’m an adult!

Mike: My mom made me breakfast the next morning. Lunch, and dinner, and a snack.

Dom: First night on tour, Chunk (a.k.a. Mikey) you could share that one.

Mikey: Maryland? Our battery died in the hood and it died so bad that we were jumping it for a long time and the van forgot how to work. We got hassled by the cops multiple times for no apparent reason.

Dom: We were in Connecticut driving to Rhode Island and our van breaks down. We were staying at a friend’s house for a few days. Our van breaks down and we have to get it towed, and her (friend who was hosting) driveway has this huge ass hill. The tow truck driver backs the van down and takes it off the tow truck. You’d expect him to put it into park. But he didn’t put it in park, so it rolls backwards into our friend’s house. Fucked up the foundation of the house.

ME: Plans for the fall?

Mikey: The leaves are gonna fall.

Mikey: Whatever my mom lets me do.

Dom: She could give you cheese and crackers, and not change your sheets.

ME: Who does most of the  music writing and composition?

Rob: It’s all kind of a group effort. I’ll have lyrics and basically a couple of chords on guitar. Maybe I’ll demo it out on my computer. I’ll bring it out to the guys and from there they add on whatever.

ME: You were on Warped Tour 2013, who were you most excited to see?

Dom: We played the Camden date and we saw The Wonder Years, The Story So Far. But a lot of that day was us working. Chilling by our merch table before and after our set hustling, typical Warped Tour thing to do.

Dom: That’d be sick I would love to go on Warped Tour.

ME: What would you say is the biggest challenge for you guys as a band?

Rob: I’d say it be adapting. The longer you’re in a band and the longer you do it, the more work you realize there is. Making the sacrifices to make it happen. I mean, whether that’d be working less so you could be in the band more. That’d be the biggest I would say.

Dom: I agree with that. We’re always putting in a lot of hard work into this band. I wouldn’t say it’s a challenge but we always gotta keep in mind is to keep working stay grinding.

Rob: Give up a normal life to make it happen. To do something you love.

ME: ‘Chardonnay,’ saw the video, whose brainchild was that?

Rob: And our director is even more crazy. He made it more insane.

Dom: When we were coming up with ideas for the video, we wanted to keep it lighthearted, but that hasn’t been done before. We don’t want the typical video of the guy chasing this girl around, or trying to get this girl. We didn’t want the generic thing. We wanted people to say “Yo, that video was so weird but, I liked it.”

ME: Future plans in a nutshell for you guys?

ME: If you could tour with anyone past or present who would it be?

Mikey: The Rolling Stones. Because they really party hard.

Dom: The Stones, 1975, The Maine, AC/DC and Drake. I don’t know, I wanted to throw Drake in there somewhere.

Rob: Bruce Springsteen would be cool. Bon Jovi, I saw Bon Jovi at Bamboozle and this guy is pushing sixty years old and all these moms are going crazy like Justin Bieber fans!

Dom: He’s like the Justin Bieber of the eighties.

ME: What do you want your fans to take away from your music?

Dom: In general, for them to have a good time when they’re at our shows. It doesn’t matter what people think about you, go have a good time. Going to a show is not for anyone but you. Just enjoy yourself.

ME: Anyone you’d like to acknowledge for offering support?

Mikey: He’s a good guy, he’s a smart guy he can do things, Matt Naimoli.

Dom: He’s a smart guy, he’s been in the music scene for a while. Overall he’s an awesome dude. He definitely deserves some credit behind the scenes.

Mikey: Yeah Scooter, ‘cause he teaches us a lot.

Mike: Dan Fulton, he made our band into a band.

Mikey: Our parents for not kicking me out and our dogs. They’re the only ones that genuinely miss me.

Dom: Thank you mommy and daddy for supporting me!

For more up to date information on The Stolen:

The Stolen on Itunes

Concert lover, music fanatic. If it sounds good to me, the rest doesn't matter.
@njaziaddict
Previous Stash König Visualizes Hit Remix of X Ambassadors “Renegades”! Out Now On Interscope Records
Next Scorpions Rock Documentary “Forever And A Day” Set for US Theatrical Release