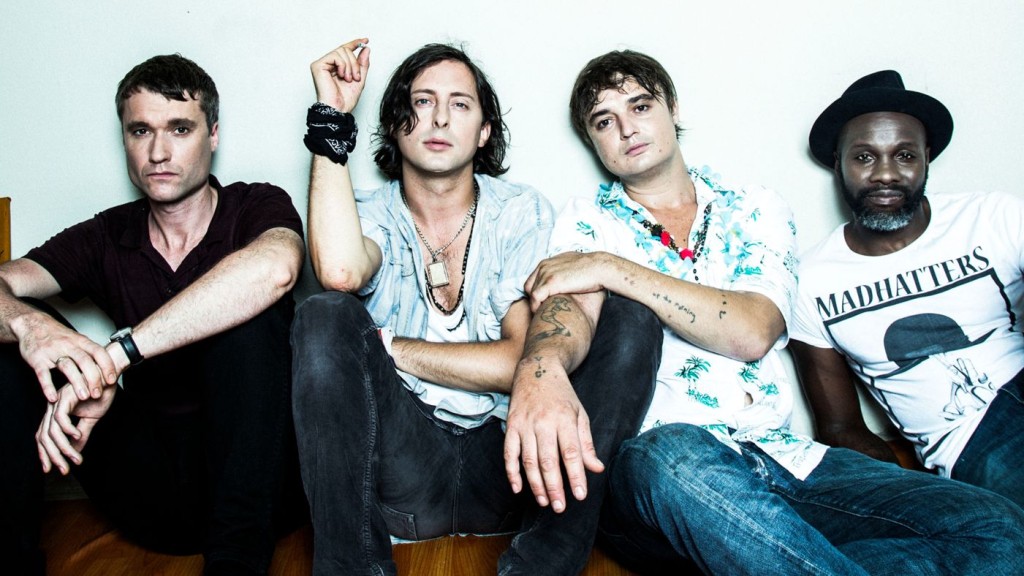 No band was more instrumental in initializing the 2000s garage rock revival quite like London, England’s the Libertines. Cemented by blood brother frontmen Carl Barat and Pete Doherty, the quartet shared an affinity for ‘77 punk and bottomless chaos. With two full-length albums and a handful of exceptionally charting UK singles, the band made like they could stand undeterred. Despite this widespread national exposure however, a saturation of lurid press, personality clashes, and drug-fueled bouts led to their dissolution in 2004.

Fortunately, that breakup proved far from untimely. Amidst the pursuit of other projects, the band’s initial reunion six years later—albeit a one-off—was met with tremendously positive reception. Four years after that, a longstanding reunion seemed promising upon their return to a four-piece. A stint originally planned to last for a single show had unexpectedly catalyzed the dual sell out of Hyde Park and Alexandra Palace. Sustaining such impact after a lengthy inactivity could only warrant something as sensible as a new album. In fact, that is exactly what the Libertines had in mind.

Newly signed to Virgin EMI, the Libertines returned with Anthems For Doomed Youth last Friday. While their debut album displayed a Buzzcocks-laden disenchantment, and their follow-up a tighter power pop punch, this album wipes the slate clean and begins anew. The songwriting is succinctly aware, the vocals are coherent and direct, and the chemistry has never been more fluid.

“Barbarians” starts the album with an all-too-familiar feedback whine, and the spunky main riff that follows equally reassures fans that the Libertines are back. Opening with the lines, “This one’s for your heart and mind/The melodies in 4/4 time, the song suggests a playful awareness of fan expectations for a rehashed follow-up. But once the full lyrical context is considered, it essentially promotes a healthy means of letting loose from a drab routine. The presentation of the song is drastically more tuneful and without deviating from the band’s original aesthetic. It is surprises like these that allude to their identity, as well as justify how much they have grown, not only as musicians, but as people. “Gunga Din,” impressed me in the same respect. First released back in July as a pre-album single, it feels natural in continuing to pace the album. I was in awe over how fitting the island-influenced vocals were atop the instrumentation. The buildup to each chorus teases into an overdrive, but then shifts into a brazen melodic maturity. For the carrier single, it is a solid telling of the band’s ability to stretch beyond the bounds of a timely movement. On the third track, “Fame and Fortune,” the grandiose and lavish vibe is in perfect accordance with the song title. It really plays like a B-side to Blur’s Parklife, clearly hooky and delving into the bleakness of British society. Likewise, the “Anthem For Doomed Youth” track deals with a connecting subject matter. It puts a decidedly negative spin on the notion of freedom, whether it involves finding a shortcut to success, making the worst out of normally cherished times, or simply throwing away dreams entirely. The disheartened guitar and vocal melodies during the chorus are of stark contrast to the eager and otherwise hopeful nature of the previous song. Even so, both songs find ultimate common ground in recognizing the fate of decision by one’s independence.

The fifth track, “You’re My Waterloo,” previously existed as an older demo prior to its inclusion on the album, and it still hits home. When two people separate, it is common for negative thoughts to resound harder than they should. Based on the lyrics and drawing from my own experience, I interpreted the word “Waterloo” in two ways: the first being a battle that ended in a crushing defeat (in this case, emotion-based), and the other alluding to London’s Waterloo Station, which, from the song’s context, is suggested to be a path of false hope. Since the song was written at a low point, listening to Doherty and Barat harmonize during the chorus can prove quite chilling in retrospect. But since they’ve decided to put it on the album, it is simply a memory to look back on.

By the latter portion of the album, the raw indie momentum from the band’s early days makes a swift entrance. Listening to “Fury of Chonburi”, its speed and aggression are surprisingly refreshing, as if to say the band feels unashamed to take a small step back. It’s also at this point that I’m reminded of the true spirit of rock and roll, and how it seems to exist in small pockets nowadays. Another track that stuck out for me was all the same penultimate, “Glasgow Coma Scare Blues”. Contrary to its title, it is hugely reminiscent of mid 1980s grunge, bringing up flashbacks of playing intimate, dingy clubs for the sheer fun factor. The final track, “Dead For Love” brings the heaviness to a lull, almost like those regressive vibes are put into perspective. Even with its rather abrupt stylistic deviation, it lyrically validates the experience of the previous songs. The notion that having followed a passion leads to a peaceful sleep is understood. Whether one’s aim is trying to rekindle a broken relationship, keeping a heavy guard to face a cruel world, simply escaping to a world of pure joy, it is time well spent.

Overall, Anthems For Doomed Youth is one of those albums that any rock fan of this generation would yearn for. Provided the Libertines have only a small following in the United States, this album is sure to reinvigorate their rock scene tremendously. As a whole new spirit enriches the band, long may their striving for greater success continue. It’s safe to say that when all is said and done, the miasma of past controversy has cleared, and the bond between bandmates successfully restored.

Be sure to pick up the album, available in CD and MP3 formats here!

I come from a family who is passionate about all things music. I learned to sing at an early age, and by 13, had my very own Fender Strat guitar. I tried my hardest at learning all that I could. Because I was born with cerebral palsy, I had to teach myself an adaptive playing style. I learned to write and record my own music, despite these difficulties. In college, I started making great use of my writing abilities by reviewing music, as well as copy editing. I guess it's best to stick with what you know, while welcoming a fair challenge at the same time.
Previous O.A.R. at the Pageant in St. Louis, MO on 9.11.15
Next MEAUX GREEN & RAGETHAT LIVE @ BLUE MOOSE – IOWA CITY, IA