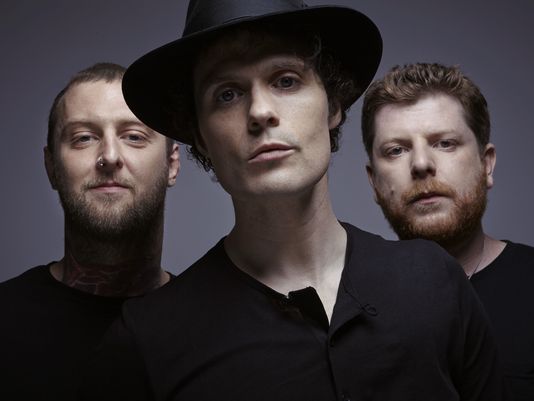 The Fratellis are back with their fourth full length studio L.P. Eyes Wide, Tongue Tied. And while there are no runaway singles to be found on the album, it is the strongest release from the band since their debut Costello Music.

Right out of the gate, The Fratellis serve up their three catchiest songs in a row to listeners. “Me and the Devil,” clocking in at over five minutes, begins with an atmospheric instrumental introduction with pounding drums and tickling piano that becomes more prominent as it goes on. It’s dark and sexy, with lead singer Jon Fratelli playing up the edge and delicate intricacies of the content of the track, in a commanding and powerful way. With lyrics such as “I’m gonna sell this soul of mine,” which are repeated throughout the track almost as a chant, it wouldn’t be surprising if “Me and the Devil” ended up as accompanying music on a paranormal CW show. “Imposters (Little by Little)” introduces a country vibe to album that is carried in part throughout the L.P. but it is never more successfully accomplished than on this track. Never losing its alternative origins, “Imposters” is perhaps the most radio friendly tune to be found amongst the other ten tracks. And while the instrumentation connotes a light feel, the song is no doubt deep in content: “You’ll wear your mask, I’ll wear mine/ They don’t come cheap but they fit just fine/ You can be her and I’ll be him/ We’ll go sink while the rest starts to swim.” And as Jon Fratelli delves into a low register, almost narration, toward the end of song, the underlying theme of “Imposters” is hammered home. “Baby Don’t Lie To Me,” which is the first single off of Eyes Wide, Tongue Tied, has the punchy, aggressive, and toe tapping sound that one expects from The Fratellis. The verses are stronger musically than the chorus, full of thrash and enthusiasm, while the bridge slows the tempo down momentarily before being amped back up with a primal scream. If you’re looking for a song to turn up full blast and sing along to, look no further than this track.

The rest of the album is a mixed bag of some of the best songs on the L.P. interspersed with ones that come up short. “Dogtown” tries a little too hard to sound like southern rock and ends up coming off as a bad bar room tune that someone inevitably gets on stage and tries to sing Karaoke to. It does have elements, in the verses, of the Beatles “Come Together,” and boasts an impressive horn section, but it doesn’t outweigh the faux grittiness of the song. “Getting Surreal” is another poorly constructed Karaoke jam with an almost rap like delivery. It’s clear the band is trying something new with their sound but its delivery is subpar at best. The chorus barely holds together the track and while the tune has the word “surreal’ in the title, the only time listeners get a feeling of anything out of the ordinary is during the instrumental breakdown which adds a much needed air of mysticism to the song.

The true masterpieces of Eyes Wide, Tongue Tied are found in the album’s ballads. “Desperate Guy” has some of the most heart on your sleeve lyrics such as “I’m no loser but I can’t win/I’m the right man but in the wrong skin” and “There’s nothing very much I wouldn’t do to catch your eye.” Combined with the simple, crisp, and clean vocals, “Desperate Guy” easily stands out as the brightest moment of the entire album. Continuing with the earnest trend, “Slow” manages to tug and pull at listeners heartstrings as Jon Fratelli pleads “If you’ve got to leave me baby won’t you do it slow.”The heartache in this song is authentic and deep and one that many listeners will probably have a very easy time relating to, especially the line “Sometimes it takes all your heart just to breathe.” It’s true that there is nothing particularly groundbreaking here, but there is an effortless feeling found on this track that is missing on parts of this album. “Moonshine” closes out the album and does so on a very solid note. Trippy and playful, it feels as if it could have come off their second album Here We Stand. It also has a very John Lennon solo years sound to it and while some may argue that it has too much of a lounge song ambience about it, that is exactly what makes the track different and unique.

Overall, Eyes Wide, Tongue Tied, delivers an enjoyable ride for listeners, even with a few missteps. After all what would a musical road trip be without a few bumps in the road?