Home / Interview / From Warped Tour to Beyond – An Interview with Kaya Stewart: “Being the kid of a famous person is always kind of difficult because there’s always going to be comparisons.” 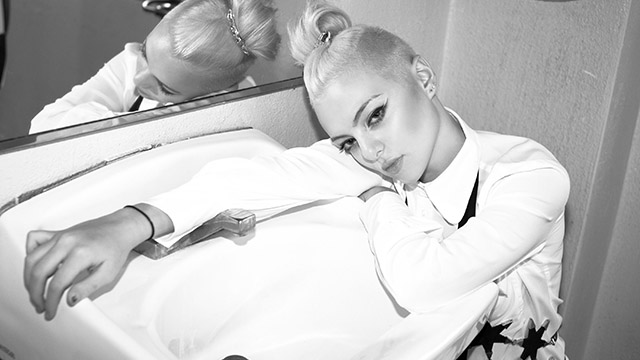 From Warped Tour to Beyond – An Interview with Kaya Stewart: “Being the kid of a famous person is always kind of difficult because there’s always going to be comparisons.”

It wasn’t so much an act of rebellion as it was impulse that made Kaya Stewart, then 13, flip over her math final and pen what would eventually become her first single. Nevertheless, as she sat in class, algebraic equations forgotten amongst lyrics of love unrequited, Kaya realized singing was what she wanted to do. Having been surrounded by music her entire life, it’s not surprising to think that the daughter of Eurythmics member, David Stewart, would eventually pursue a career in music. However, according to the young singer, some things just can’t be manufactured; they have to happen naturally. It was this message that fueled the energy behind her debut EP, In Love With a Boy, and it was this energy that captivated audiences day after day at the 2015 Vans Warped Tour. While some are calling her the festival’s next breakout star, Kaya, now 15, insists her only goal is to share music that everyone can relate to.

In this interview with Music Existence, Kaya recaps what life was like as an artist on Warped Tour, the realities of growing up with a musician as a parent, and the timelessness of her debut EP, In Love With a Boy.

ME: First off, congratulations on a very successful run at Warped Tour! Tour-goers have shared their experiences, but what was a typical day like for you as an artist?

KAYA: Typically, I would get up in the morning, usually around eight or nine, and start making flyers and stickers so we could hand those out, and putting up posters to let people know when our set time was. We would also set up merch, meet fans, and get to know everyone. We didn’t really know our set times until early morning, so until then, our morning was focused on meeting fans and the people of the show.

ME: Was this your first time attending Warped or did you attend before?

KAYA: I went to the Pomona [California] show, which was the first Warped show I’d ever been to, and it was nothing like I’d ever seen before. People wait year-round to come to these shows, and I think it’s so cool that I got to be a part of something that people wait the entire year to see.

ME: You were touring with some highly acclaimed Warped veterans. As a first-time performer, what lessons did you take away from your fellow musicians?

KAYA: I learned a lot about how to communicate with my fans. Some of these guys have been on this tour for five or six years, and they still take time out of their day to go talk to their fans that have been waiting at the merch booths all day. I thought that was so cool because if I was a fan and I got to meet them, it would mean so much to me that they took time out their day to talk with me. I got to meet so many of my fans, and I learned a lot from them, so communication was definitely a lesson I learned from some of the Warped veterans.

ME: What was one of your most memorable Warped moments?

KAYA: Definitely our Chicago show; it was our most successful one. There were about 300 people in front of our stage, and that was a huge deal considering there are 70 bands on this tour and Black Veil Brides was playing around the same time as we were. It was cool to see so many people, and I met some girls who came to Warped Tour just to see me. It meant so much to me because I had no idea these girls actually listed to my music, but they were telling me their favorite songs, and it was really good to see. That was just a really cool show with a lot of great fans.

ME: Was there a particular artist or band you found yourself musically drawn to?

KAYA: Yeah, I got to make friends with a lot of artists. There was actually a lot of music I wouldn’t expect myself to listen to, but I became a Pierce The Veil fan after I saw one of their sets. It was incredible the amount of fans – guys and girls – who lined up with their T-shirts and merch to go see them. They’re great with their fans, and I definitely became a Pierce The Veil fan during the tour. There were just so many different artists on tour, so I got a chance to meet so many different people.

ME: You had the pleasure of performing the national-leg of Warped, which means you were touring practically non-stop. What did you do to unwind and maintain your sanity?

KAYA: I never stopped working. Everyday I was working a project or something was going on, and as soon as I got home, I went straight back into the studio and came up with new songs. It hasn’t been too much of a shock coming off tour because I’m constantly working. The new album is coming out really soon and there is a lot of preparation for that, so it’s definitely nonstop for me.

ME: Warped Tour has played a huge part in launching the careers of some of the biggest names in music: Katy Perry, Paramore, No Doubt, and Eminem. Critics are proclaiming you as the next breakout artist to come out of the summer festival. Do you feel the pressure to live up to that statement?

KAYA: I definitely think there is some pressure in that, but you can’t really make “the next breakout star,” because it’s all about the right time, the right fans, and the right music. It was really great to see more and more people come to our stage as the tour went on, but it’s really a combination of things. I’ve been working really hard since last year, and Warped Tour was an amazing thing to do because I gained some truly amazing fans. But, there are so many bands on this tour, so it’s unbelievable to think that one person could be the breakout artist. I mean, it’s crazy, but it was flattering, though. (Laughs)

ME: Before Warped, you participated in the High School Nation Tour. Tell us a little more about “Schoolchella,” and how it compared to Warped.

KAYA: It was nothing like Warped Tour. This tour had four bands, and we would tour high schools, which had around 1000 to 2000 kids; Warped Tour had 10,000 every single day with 70 different bands. The High School Nation Tour was a lot of fun, because it was my first tour. I got to know what tour life is like, meet fans, and introduce my music to new people, so I’m happy that I got to do it. Like they said, it was Coachella but at your school, and I’m glad I got a chance to be a part of such an amazing project.

ME: Music has played a significant role in your life. What artists did you admire while growing up, and how have they influenced your own personal musical style?

KAYA: I listened to a lot of old soul music growing up. That was definitely something I was drawn to, and I think you can hear some new soul elements in my music. But, I’ve always been a huge music fan, so I’m listening to new music all the time.

ME: Being that your father is a world-renowned musician, do you ever feel that people are hesitant to warm up to your music or try to discredit you? If so, how do you handle that?

KAYA: I think being the kid of a famous person is always kind of difficult because there’s always going to be comparisons. There’s always going to be people who ask, “Did he teach you this;” and, “Did he help you with that;” and, “Are you as good as this?” I’m lucky that I actually get along with my dad and he really likes my music. He helped to produce my music and manage me, and I think more than anything we’re friends that get along really well, so it’s never been a really huge problem. I’m a fan of his music as well, so I really don’t mind. (Laughs)

ME: You’ve mentioned how your age serves as a huge inspiration for the type of music you make. How do you hope your music will impact listeners of all ages?

KAYA: When I wrote this album, I was at my most vulnerable time in my life so far. I wasn’t trying to be fancy with my wording, and I wasn’t trying to be over-the-top with my production. I was really just writing from the heart, and I think people can relate to that more than any crazy beat or metaphor. I think more than anything, if someone is being honest, the music is more relatable and people can connect with it more.

ME: And it makes the music more timeless, don’t you think?

KAYA: Right, and that’s what we were going for. We wanted this album to be something that you could listen to 10 years from now and it still sounds new, and fresh, and interesting.

ME: I think it’s pretty fantastic how you wrote “In Love With a Boy” on the back of your math final. I mean, it’s almost rebellious in a way!

KAYA: (Laughs) I never really thought about it much until people started bring it up and they were like, “That’s so cool,” and I thought yeah that is kind of cool. I never really told my teacher. I remember just running home and being so excited.

ME: Was this the moment you realized you really wanted to pursue a singing career?

KAYA: I think so. That was the defining moment where I knew this was what I wanted my sound to be.

ME: Being that you’ve been surrounded by musicians your entire life, did you collaborate with others during the creative process or was your first EP strictly a solo project?

ME: Your debut EP, In Love With a Boy, has been pretty well received by music lovers and critics alike. How did it feel when you listened to the finalized EP for the first time?

KAYA: I knew right away that it was finished, it was done, and it was how I wanted it to sound like. It was an amazing feeling to think how I’d been working on something for so long and now it’s finished. I’m so glad it turned out the way that it did.

ME: Now that the world has seen the talent you possess, what are you planning next?

KAYA: It’s all about promoting the album that we have now, so definitely working on that and getting a new single out. There is definitely going to be another album in the future. There are so many different things I’m willing to try out that I’m really excited about, so definitely a lot to come in the future.

Grab your copy of In Love With a Boy here:

Hall & Oates are the best selling duo of all time. With an estimated 40 million …