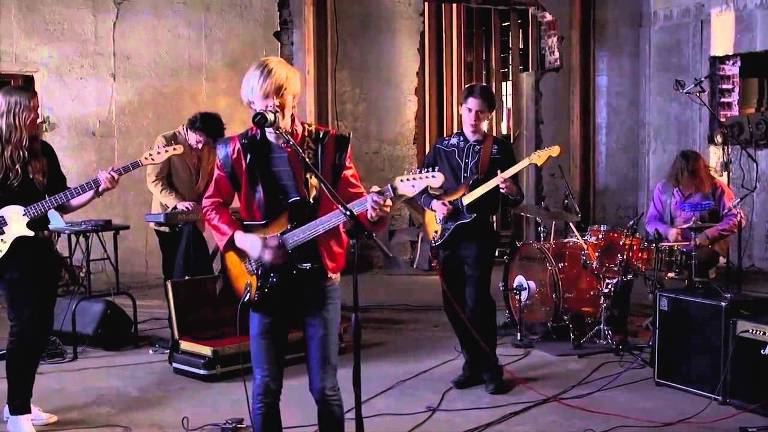 Fall is inevitably coming in just a few short weeks, but you can relive the summer all year round on Western Plaza’s self titled debut album. Full of energy, slightly punk, and Beach Boys vibes, the album has everything you need to make a good one last hurrah summer party playlist.

Bursting out of the gate is “Tornado Dream” which is raucous and raw and full of good old fashion rock n’ roll. Hand claps dispersed throughout the tune, mixed with electric guitar, takes one back to the early Beatles era of music. Full of youth and fun and sure to make a splash on the music scene. And when the band croons their “Ahh’s” towards the middle of the track one can’t help but think of John, Paul, George, and Ringo doing the same on “Twist and Shout.”

Every song on the LP is top notch, but there are certainly a few standouts. “Creature” is the first taste listeners get of the surf rock sound that Western Plaza does so well. “Come on girl/I wanna take you for a ride/you’re my creature,” lead singer Michael Blackwell snarls with equal parts playfulness and darkness. It’s the type of tune one can imagine blasting out of a 60s style chevy, pulling up to pick a girl up on a date to the drive in.

“Mexican Girl” is another upbeat tune that shares some likeness to The Beach Boys “409.” They match the boys punch and adrenaline fueled in every way. It has one of those choruses that will be stuck in your head in a good way long after the song is over, and a spirit that seems encapsulated in a time gone by, yet with still a modern garage rock type of sound. If “Mexican Girl” doesn’t bring people out on the dance floor when played at a party then nothing else will. Just try not to bop your head along.

In an album full of sunny sounding tracks, “The Wall” stands out as Western’s Plaza most accomplished ballad. It has a more melancholy content with lyrics such as “I’m so ashamed of wearing out my name” and Blackwell crying that he is “terrified of the truth.” But while “The Wall” is definitely a downer for Western Plaza it is a delight to shift gears and hear the flip side to the bands more bouncy sound.

While 99 percent of the album hits all of the right marks for a near perfect L.P., the flow feels off when listeners get to the last song “Yellow City.” Yes, it has a more morose feel than what the album usually boasts, but that is not what disrupts the continuity of Western Plaza. It is the fact that the tune, albeit gorgeously produced and written with some of the most earnest and profound lyrics, suddenly becomes folksy and country with a hint of Johnny Cash splendor. It is one, if not the, strongest song on the entire album and if it were to be placed anywhere on the entire album, it does make sense to end on this note. But the shift in genre comes so far out of left field that it takes away from the masterful musical landscape that Western Plaza has delivered on an otherwise flawless debut.

If you’re looking to make one final trip to the beach before the leaves start to turn colors, do yourself a favor and listen to Western Plaza and bask in the glory of what is left of the summer.