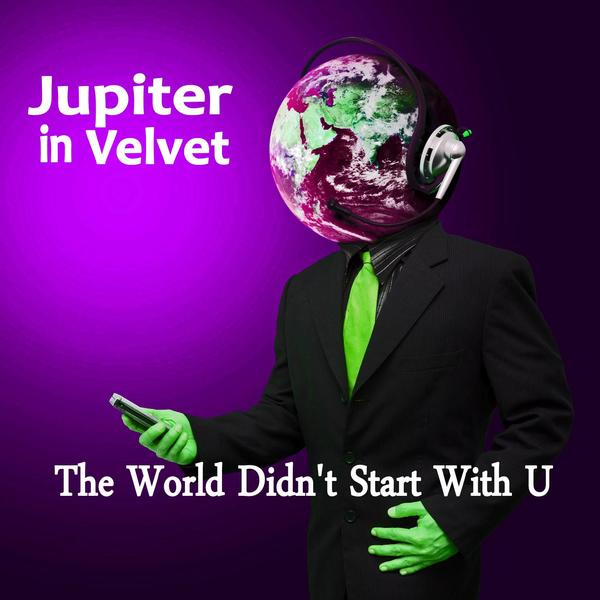 Jupiter in Velvet – The World Didn’t Start With U

Jupiter in Velvet – The World Didn’t Start With U

The twelve songs on The World Didn’t Start With U will leave you wondering why someone didn’t think of this sooner. Perhaps there are inklings of this sound in Depeche Mode at their darker moments or bands of similar stripe, but recalling anyone or collection of musicians who have so fearlessly and capably paired the powerhouse theatrics of rock guitar with the glistening sheen of industrial and electronica will be difficult, if not impossible. Jupiter in Velvet bravely charts his own course on his fourth studio album and his self-titled brand of electro dance rock will win new converts with this effort.

It opens with the title song, a furious onrush of rock drums and blistering guitar with an unique, exuberant mood. Velvet’s outstanding vocal might surprise some because someone with such obvious pop strengths can carry off a hard-nosed rock vocal like this. Velvet, however, is absolutely convincing. His authority extends to the album’s second track, “Alpha Me Omega U” that bristles with compelling musical tension. It’s, in equal turns, suggestive and entertaining. It’s gritty and tough-minded without ever losing its innate musical appeal. “The Beauty of U” is much more melodic going and the riffing guitars of the opening tracks expand their sound to cover jangling, softer styles. “When Love Rules the Day”, however, is pure guitar driven anthem with an affirmative lyric and immaculately phrased guitar work. This is the production working with the material at its zenith and another great Velvet vocal makes this, arguably, the album’s best song.

“Turning Electric” mixes more of his dissonant guitar voicing with an electronic edge. Even though the sound has incredibly density, the music never feels flat-footed. Instead, there’s such an unique personality bleeding through this track thanks to the atmospheric guitar effects, lyrical content, and treated vocals. “No Matter Where U Go” is a stylistic 180 that finds Velvet incorporating acoustic guitars into the music for the first time on this album. It’s a poppier outing than others, but that’s no slight. His gift for melody is often just as critical to the success of this album as any of the guitar histrionics he conjures up.

“The Everything & the Nothing” invokes some of Velvet’s rowdier punk influence, but there’s some flashy guitar playing that’s far removed from the less is more punk aesthetic scalding the track with its nasty rock and roll fire. The collision of styles gives this track considerably more six-string firepower than many of the other tracks. However, there isn’t a song packing greater firepower than “Eat Your Fear”. This aural assault looks to crack bone from the beginning and bears down on the listener with breathtaking intensity. It’s the album’s final blast of full on rock fury before the final track, “Drive In2 My Sea”, settles the album conclusively with a laid-back, mid tempo song of longing and glistening with a bright pop shine.

The World Didn’t Start With U has the sort of energy you might typically associate with debut albums put together with a real attention to detail and a polished songwriter’s ear. There’s impressive stylistic diversity spread across the album’s twelve tracks that never overstays its welcome or sounds prefabricated.