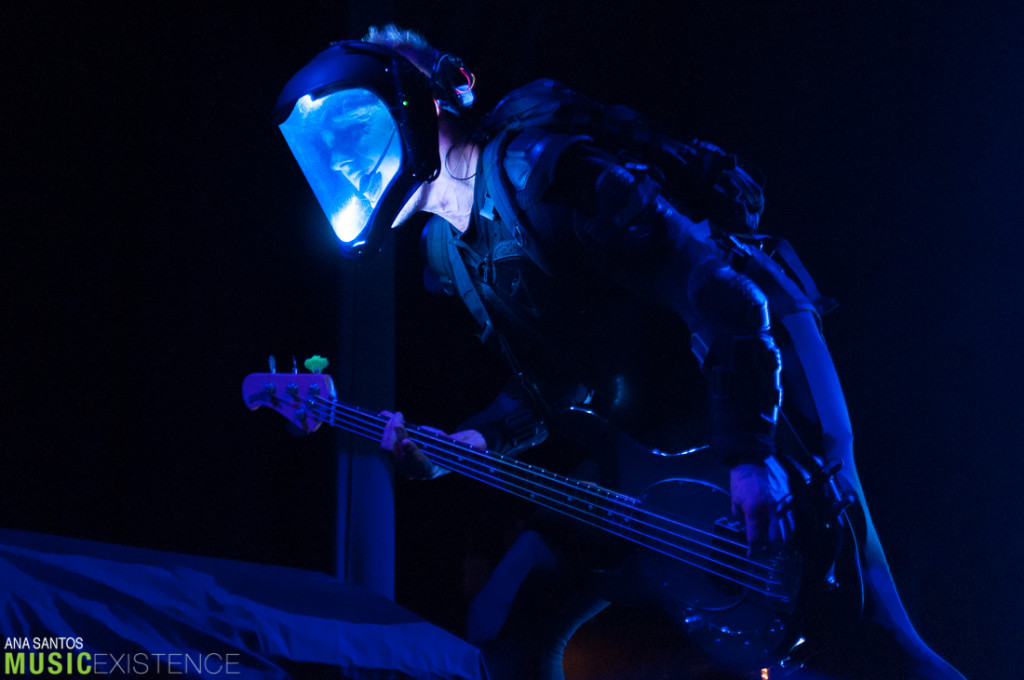 Starset is not just a band. It’s a revolution in music and media. Backed by a deepening Sci-Fi mythos courtesy of the Starset Society, and blazing with an interstellar set production that ties seamlessly into its evolving canon of scientific discovery, Edison, Tesla, the occult, and government conspiracy, Starset is a band that deserves to be experienced.

Front man Dustin Bates shows incredible vocal range, churning through perfectly smooth melodies or batting into hardcore dynamics where the drama of the songs call for it. Bassist Ron DeChant, guitarist Brock Richards, and drummer Adam Gilbert round out the outfit, emblazoned by electric-blue ‘Starset masks’ from the cover of their debut album Transmissions. Which is really only the taste of the full picture.

The band refers to their performances as ‘demonstrations’ and I’ve had the opportunity to experience three of Starset’s demonstrations over the last year. That first time I was as unprepared for the show as I’ve since seen many others in the audience be unprepared. Surprised, skeptical, intrigued—love-at-first-listen—initial reactions vary, but one thing is immediate: Starset is not your typical opener. They come decked out in space gear lit up with LEDs. They rock out in front of a barrage of intergalactic imagery that plays like a movie behind them, tying us in to their ‘transmissions’, flashing us their message. Bates conducts the demonstration like a rogue scientist before his Emulator-DVS (Dual View System) Touchscreen—a fully functional device by Smithson Martin he uses to DJ the electronic sound elements during the live show. It makes for a great visual as well, high-tech-teetering-on-Hollywood-FX, sowing in to the viral marketing campaign that’s visibly been spreading. I hear more and more people in the audience singing along to the lyrics at every show.

Saturday’s demonstration at The Paramount in Huntingdon NY was further proof of the band’s increasing momentum. They kicked off with the track “First Light,” a dramatic build of voiceovers and instrumental cues reminiscent of Christopher Nolan’s Inception. Commanding the stage with their signature production, Starset unfolds like a cinematic vision through the atmosphere they create. But with the first verse of “Rise and Fall,” they prove they’re much more than a flashy gimmick.

Their music combines melodic hard rock elements with a booming bass that rattles into the guts of everyone in the first five rows. Songs like “Carnivore” and “My Demons,” arguably the hits off Transmission, boast incredibly catchy hooks the audience can holler back in growing chorus.

Bates allows Starset to grab its audience before he openly invites people to meet with the band at the merch table after the set, and more importantly—invites them to ask questions. Not just of Starset and its unfolding saga, (or why there’s guys in space suits on stage) but of ourselves and of our government. Starset’s political and scientific stance on spreading awareness is unlike any other band currently on the scene. But when we consider Bates’ background as a Ph.D. candidate in electrical engineering, US Air Force research and as an instructor at the International Space University, it’s not so surprising. Only two years into the project, Starset is breaking new ground, and if their steady climb from obscurity into radio stations nationwide is anything to judge by, we’ll be hearing—and seeing—a whole lot more of them.

If you’re unfamiliar with Starset, I highly recommend you change that. Check out their singles on Youtube, pick up their album on iTunes and if you get the chance to experience a demonstration live, definitely do so!

Starset is currently on tour with nationwide dates into October (see dates below).

Check out our photo gallery from the show!

Setlist:
First Light (intro)
Rise and Fall
Down with the Fallen
Halo
Telescope
Carnivore
The Future is Now
My Demons

Writer, copyeditor, insatiable horror film addict. I\'ve got a BA in English and a BS in insomnia. I write novels about anarchists and photograph abandoned asylums while mainlining coffee and listening to Radiohead. There\'s a lot of black in my wardrobe. It\'s not without cat hair.
@elisagrace_nj
Previous BREEZE – Same Wave
Next Gallery: Starset at The Paramount, Huntington NY 08.15.15