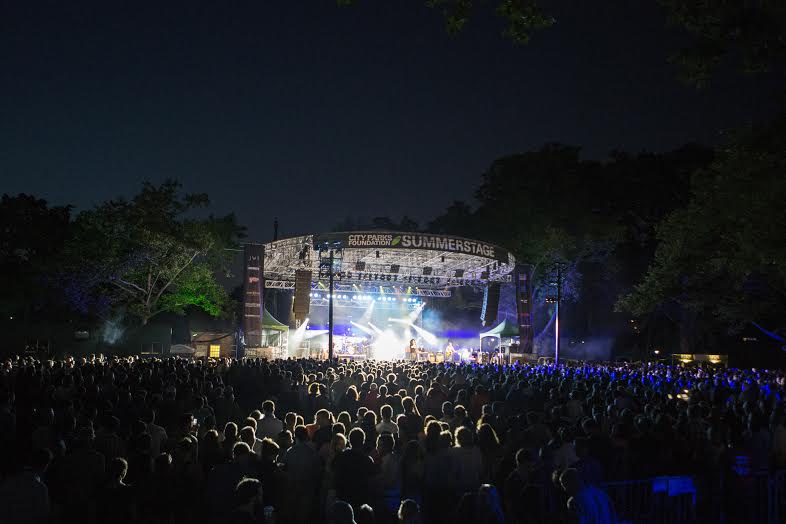 Erika Elliot has over 20 years of experience in a plethora of different professions throughout the music scene. Currently, she is the Artistic Director for the City Park Foundation’s performing arts festival, SummerStage, which is celebrating it’s 30th anniversary this year.

Ms. Elliot gives us some insight into the magic of one of New York City’s greatest festivals, and also provides us with a brief history on her own life, and that of the historic SummerStage:

What work were you doing before you got involved with the artistic direction for Summer​S​tage and what doors has it opened for you since?

​I have spent my entire career in the music business in several different areas from marketing and artist development to radio promotion and working in a booking agency, but directly before I joined SummerStage I was the talent buyer for New York Club; Sounds of Brasil.​

Summer​S​tage has come a long way since it’s inception 30 years ago, where do you see it going in the next 30 years?

​My hope for the festival is that it expands and finds a permanent location in all 5 boroughs with expanded programming in each that more closely mirrors what we do in Central Park. This summer with our 30th anniversary expansion we are coming closer to that long term vision than ever before with multidisciplinary runs in all 5 boroughs, and I believe further expansion city wide is what I would like to see in the future.

What is your favorite venue out of all of them?

​There is no way to answer that, its like picking your favorite child! I will say that St. Mary’s Park in the Bronx is my neighborhood park so I feel a personal connection to that location and community.

What is great about all the locations, and something you can only get by visiting SummerStage, is you really appreciate the regional diversity of New York City. It is something that I have really come to appreciate and something that not all New Yorkers see. Its one of the great things about the festival – a chance to see not just Manhattan, but Bed-Stuy in Brooklyn, or the South Bronx, places you might not have reason to visit otherwise, and not only to visit them but to be in a public space with that community having fun, and seeing the arts. There is something so distinctly New York, and magical to me in that. ​

New York is obviously a perfect fit for outdoor summer shows, but do you think Summer​S​tage would ever expand nationally or even globally?

​I think SummerStage is a New York institution whose model other cities and festivals have tried to replicate BUT our goal at City Parks Foundation is to serve New York City, and New Yorkers, and to bring people into parks. We don’t need to do that anywhere else, although I believe what we are doing and the way we are doing it is a great model that has lasting impact. I would encourage other people looking at public programming o look at what we at City Parks Foundation are doing not just in the arts but also around sports, volunteerism, and education.

What have been your favorite past performances?

​Again, its one of those impossible questions, but here are a few highlights; Gil Scot Heron’s last New York performance stands out. The Vampire Weekend show in a huge downpour, with Adele dancing in the rain backstage, KRS-One performing in the South Bronx, the Planet Hemp concert where Seu Jorge joined them onstage and so many more come to mind. Over the last 10+ years I have been blessed again and again with historic musical moments and experiences, I am very lucky!

What do you want people who have never been to a Summer​S​tage show to know about it?

​First and foremost, we are a non-profit, that is not run by the city or parks department (although we are grateful for the long standing and critical partnership with both agencies), and that beings said, we raise all of the money to do everything that we do around the city. If everyone that came to SummerStage in Central Park donated to the organization just the price of one average concert or dance ticket (35.00) we could do so much more! ​

Beyond that I would encourage people to be adventurous, and take the train to a part of the city they have never visited to see an artist they have never heard of, and discover a side of New York City that they may have never seen and perhaps a genre or artists that they’ll love for years to come. In short, take advantage of the SummerStage festival citywide!

From Los Angeles and living in New York. Always listening to music.
@http://www.twitter.com/BecahJayy
Previous ALTERNATIVE ROCK BAND EDISUN RELEASES NEW ALBUM COLLISION ON SRG RECORDS
Next Interview with RVLS: “We’re all here for the same goal; there’s no reason we shouldn’t be able to get there together.”