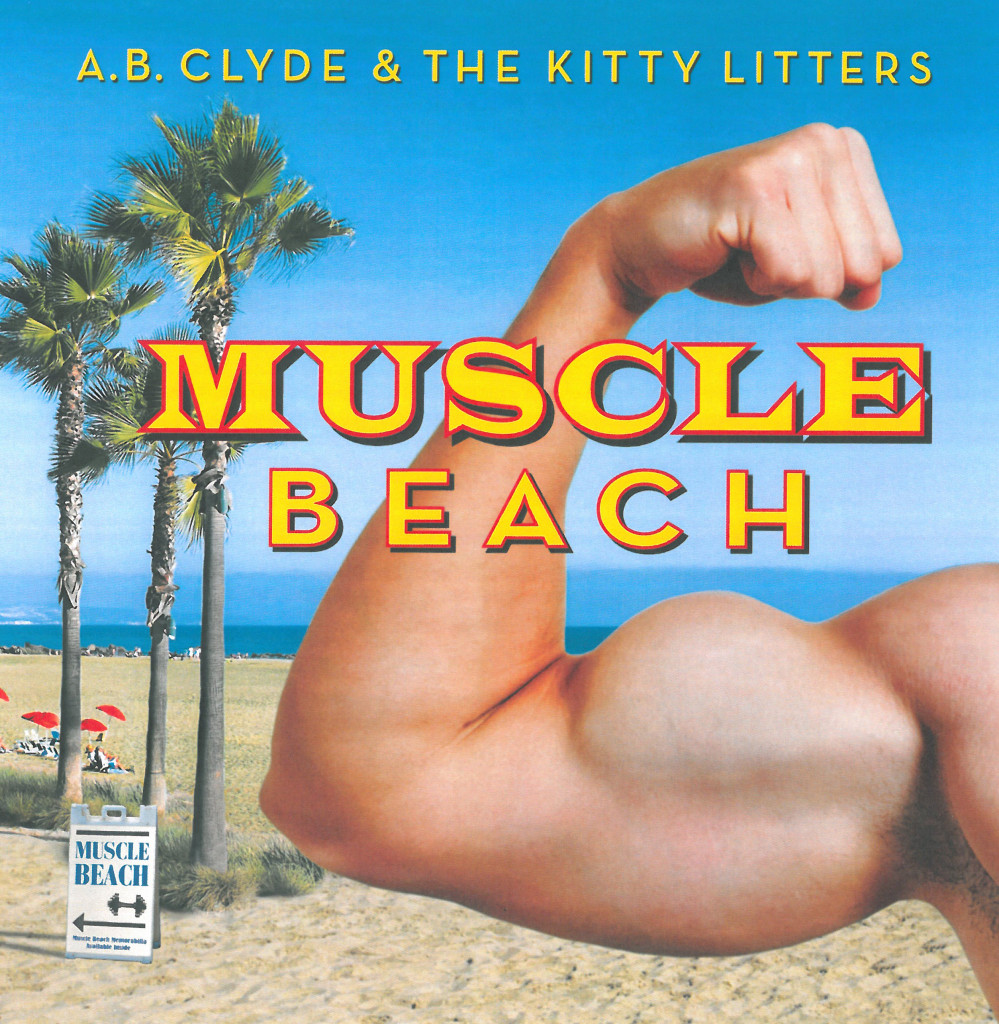 If A.B. Clyde ever decides to quit the music business, poker playing might be a good alternate career. There’s enough sleight of hand and trickery on his second album, Muscle Beach, to suggest there’s money in it for him. One listen to this fifteen song collection might convince you this is, even if he isn’t dead yet, the Second Coming of Jimmy Buffet. Clyde’s humor is wide-ranging, encompassing the crude and subtle alike, and he delivers it all without a dollop of embarrassment or shame. His uncompromising insistence on this approach is inspiring – Clyde cannot be accused of lacking vision. From the second listen on, however, the holes multiply. He relies far too often on a boilerplate approach to songwriting and, excepting a handful of cuts, the music sounds unfortunately similar from track to track.

“Bulldozin’ Bad Memories” opens the album with a good laugher about a jilted lover who destroys his ex’s garden with a stolen bulldozer. Even on the weaker cuts, Clyde’s narrative talents are impossible to ignore, but they shine brighter here than elsewhere. Later songs content themselves with too much repetition, but “Bulldozin’ Bad Memories” avoids it in any significant degree. “Nashville Girls” appends some traditional Nashville elements onto a comic lament about a sexually frustrated man’s failure to get laid, but it doesn’t save it from throwaway status. “Why Won’t You Make Love?” is one of the album’s stronger tracks, but it’s the first one that makes extensive use of a techniques soon dragging down the album as a whole. The lyric is structured with “listing” – in this case, a catalog of the various steps Clyde’s narrator has taken in vain to woo his partner. Unlike the preceding track, this song approximates that classic country sound without invoking melodrama or weighing the song down with arbitrary instrumentation.

“Wish I Was in Paris” is a meandering and slightly confused track that mixes its metaphors, perhaps, in an attempt to write a fresh lyric. The attempt is unsuccessful. Instead, listeners hear about the narrator’s fantasy of bagging a mean-spirited rich girl, wowing them with their outlaw ways, and staying at the French’s capital’s Hilton Hotel. Or, perhaps, it’s one of the sneakiest X-rated songs of all time. You make the call. “Drinkin’ in the Dark”, however, moves Clyde into much more serious territory than before. The arrangement is careful, deliberate, and tied to Clyde’s dramatic vocal. This intimate approach helps sell the song more, but frankly, Clyde and the Kitty Litters are able to conjure sufficient atmospherics to impress listeners without any gimmickry.

“Shortenin’ Bread” is an adaptation of the traditional song, heard everywhere from folk performers to cartoons, but it’s a questionable choice. The frame of reference and alternate meanings well understood by older audiences will draw a blank with contemporary audiences, but despite this limitation, Clyde never fails to pour energy into his singing and performs like a man intent on getting this over. “I Brake” and “Beautiful” overindulge the aforementioned “cataloging” technique for songwriting, particularly the former. “I Brake”, likewise, veers into outright weird territory with its obviously unhinged narrator not terribly offended by the idea their revenge might kill their former lover. “Beautiful” has far more charm and the sort of specificity that elevated the earlier “Why Won’t You Make Love?”, but both tracks suffer from their uninspired musical arrangements.

The final two songs of the album to leave a favorable impression, “Billy Blaine” and “Railroad Buddies”, center on alcohol. The first is another Clyde song about jealousy and exacting revenge on a former lover, but more than that, it qualifies as a compelling character study set over a stripped-down, brisk backbeat. “Railroad Buddies” is another memorable track thanks to its understated songwriting and dramatic movement. While there’s potential on display in Muscle Beach, there’s also a curious feeling of someone passing off treading water as artistic evolution.