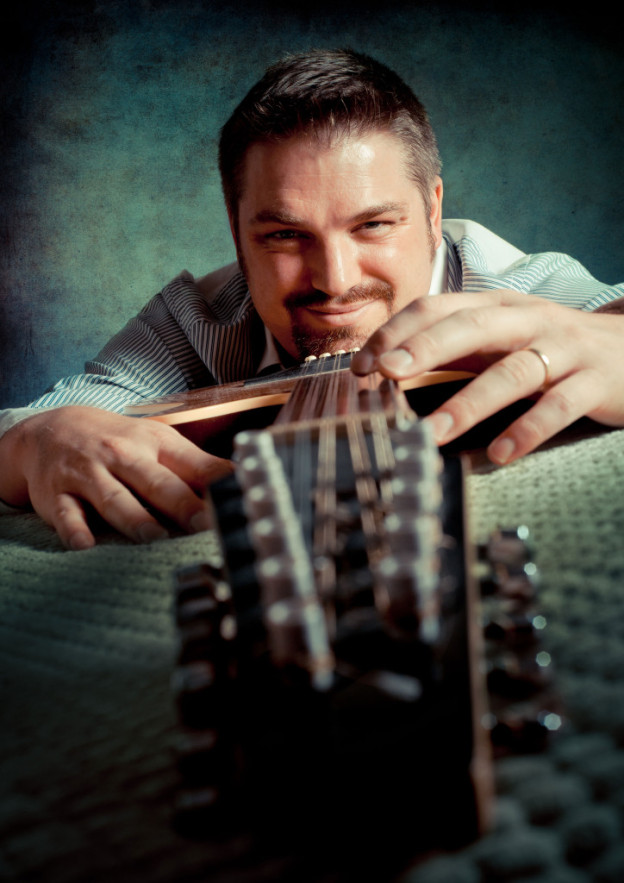 A Legend on the Rise – An Interview With Nicolas Meier

Nicolas Meier is a prolific Swiss guitarist currently residing in London, England. Meier’s multi-genre playing style and ultimate knack for virtuosity earned him widespread attention in the jazz, rock, and metal scenes of the United Kingdom. He is perhaps most recognized for his work with the legendary Jeff Beck. Last week, I reviewed the latest album of his progressive metal outfit, Seven7, called The Follower (available for listening via the band’s Bandcamp page). After I purchased the album, I’d asked Meier if he was open for an interview session. He showed great class in allowing some time out of his busy schedule to do so.

Here’s how it went down:

What was the first album that began your interest in rock music, and when did your focus gravitate toward metal?

I started with Iron Maiden’s “Powerslave”. I thought straight away how interesting it was to get some of the oriental/Egyptian sound with metal. I had fallen in love with Adrian Smith and Dave Murray soloing. It was very melodic!!!

That was already around 11 years old, when I started playing guitar. Then I got into Metallica, Bon Jovi, Wasp, Motley Crue, and from there, Satriani, Vai, MacAlpine, and Dream Theater.

Did your musical abilities stem from formal training?

Yes. I went to the conservator in Fribourg, Switzerland, where I studied classical and jazz music, although I always played rock and metal. Then I continued at the Berklee College of Music in Boston.

Who are your primary influences as a guitarist?

Well it depends on the styles, and I think there are so many guitarists who have personality!!! So in rock and metal, there’s Marty Friedman, Per Nilson, Adrian Smith, John Petrucci, Dave Murray and Kirk Hammett.

As your abilities progressed, at what point did you decide to play out professionally?

I decided at 12 years old that this is what I’ll be doing. I did gigs from that time, but became fully professional after coming back from the USA. I then relocated to the UK.

Your reputation as a guitarist has rightfully earned you the opportunity to jam with the legends. What was your initial experience meeting and playing alongside Jeff Beck?

That was amazing, as he just came to see a concert of a friend of mine who I was also playing with. He enjoyed the playing and some of my writing, so then he came to see me doing my album launch in Pizza Express Jazz club in Soho. The album was “From Istanbul to Ceuta with a Smile” and it’s full of influences: Flamenco, Turkish, Balkanique, jazz, and tango and some rock attitude. Then we started jamming. It’s really fantastic to play with him. I am learning all the time.

With all this experience accumulated from playing with different artists, tell me about how Seven7 eventually came together.

I was always into metal, and even though I am making a living playing jazz and with other artists I never wanted to stop playing metal. When I was a teenager, I was playing some techno thrash (Mekong Delta, Watch Tower) and when I came to London I joined a band called Avoidance of Doubt. Kind of a Rammstein influence. Then I decided to take control of the direction as I wanted some more melodic choruses with heavy guitars and grooves and some crazy solos and oriental influences too. Like Korn meets Dream Theater.

I met Dave Brown 10 years ago. I loved his vibe and we stared to develop our songwriting. It takes time to develop, and it’s interesting to see how it can move with time. Arran joined a few years later and he is into the same music that I like, jazz and metal. I love his fretless playing. Luke Nelson just joined two years ago. He did such a great job on recording the album. Very young and very strong.

In the progressive metal scene you’re a part of, has there always been healthy sense of competition?

Yes there are great bands with really good musicians. I love Scar Symmetry, DT and Symphony X. It’s really good to have such bands. It gives you great energy and they are all inspiring.

How has the band’s sound evolved with the addition of Sally Jo?

Sally Jo just joined us and we did our latest video with her, called “Fall”. We are very happy with her as we knew we needed an extra harmonic/lead instrument but I knew I didn’t want another guitar. So that violin sound is perfect and works very well with classical and balkanique influences.

Your metal interpretation of “O, Fortuna” in the song “Euthanasia” sounded very fitting in my opinion. What was the inspiration for that?

Well we all love classical music and on each of our albums, we liked taking a part of a famous classical piece and turning it heavy! On the first album “Try Something different” we used part of the Bolero from “Ravel” and made a song called “Scream of the Bolero”. On the second album “Under Eye” we used part of “Aase’s Death” from Edward Grieg’s “Peer Gynt”, and on The Follower, we used part of “Carmina Burana” from Carl Orff. Such powerful composers!!!

With three albums under your belt now, do you still feel like there’s always room for growth?

Yes for sure. There is so much more music to learn from!!!

What’s next for Seven7?

We are trying to get more concerts, get into tours and festivals. So let’s hope next year all will be exciting!

I come from a family who is passionate about all things music. I learned to sing at an early age, and by 13, had my very own Fender Strat guitar. I tried my hardest at learning all that I could. Because I was born with cerebral palsy, I had to teach myself an adaptive playing style. I learned to write and record my own music, despite these difficulties. In college, I started making great use of my writing abilities by reviewing music, as well as copy editing. I guess it's best to stick with what you know, while welcoming a fair challenge at the same time.
Previous Bullet For My Valentine Has New Music and Tour Dates!
Next EP Review- “Beautiful Tuesday”- Mardi Belle