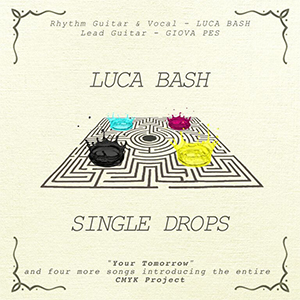 Luca Bash had a very busy year in 2014, releasing 4 EP’s that crossed genres together in beautiful and inspiring ways. He comes back this year with a five-track compilation of those albums in the newest release, The Single Drops EP. Bash has excellent musical instincts, which are highlighted here on this EP. You can hear his fearless lyrics throughout all of his songs as he dives into subjects such as the nature of reality, religion and love. While this collection of tracks is nearly a decade in the making, it is evident that songwriting comes very natural for Bash and he is not afraid to push the envelope to say what’s on his mind.

The Roman artist has even released music videos to accompany each track, which is becoming more and more trendy for artists but also proving that the music video is not a dead art. While the lead single “Your Tomorrow” might be the catchiest song on the EP, the final track “Black Swan Walls” hits the heaviest. An artist like Bash is something that should not be taken for granted. He does not have the mainstream play like other genre bending musicians, but that should not take away from what he has been able to accomplish. The Single Drops EP is the culmination of an already successful career.