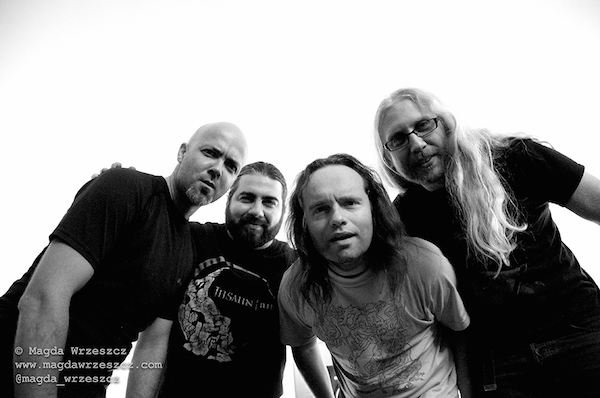 Opensight have new material just around the corner! The London-based quartet have dished the dirt on their new EP Ulterior Motives, a twisted blend of versatile influences that stretch far beyond the boundaries of metal, and even music. Dancing gleefully around pigeonholes, Ulterior Motives draws from an eclectic lists of names: Devin Townsend, Opeth, Cynic, and various Mike Patton projects all have a hand in this whirlwind. The band are also inspired by film, as can be felt by their inclination towards composers such as John Barry and Ennio Morricone among others, as well as the movie poster feel of the EP cover below – designed by frontman Ivan David Amaya – and that’s not the last you’ll hear of the filmic side of the band either.

The release date for physical and digital versions is set as September 4th.

Bio
Originally starting the band in Colombia, Ivan (Guitars/Vocals) moved to the UK to progress his vision of Opensight. Joining with Gen (guitars), Danni (bass) and finally Redd (drums) the combined styles formed the sound of the present day Opensight. With influences from across musical genres, what started life as a prog-metal focused band has evolved into a more dynamic concept, combining the energy of metal, the sophistication of progressive rock and the dramatic edge of film music.  Over the past two years, Opensight have enjoyed playing many great shows including Chaos Theory Music’s ‘The Facemelter’ and the ‘Road To Bloodstock – Metal To The Masses 2014’, where the band went through to the semi-finals, gaining exposure on some of the UK’s prime media outlets such as TBFM and Metalmouth, and sharing the stage with great bands like Sumer, Darkeye and Jackknife Seizure. Recently, the signature cinematic sound has been further explored with the recording of new material for a new 5 song recording entitled “Ulterior Motives”, and some forthcoming extra features to be released soon.