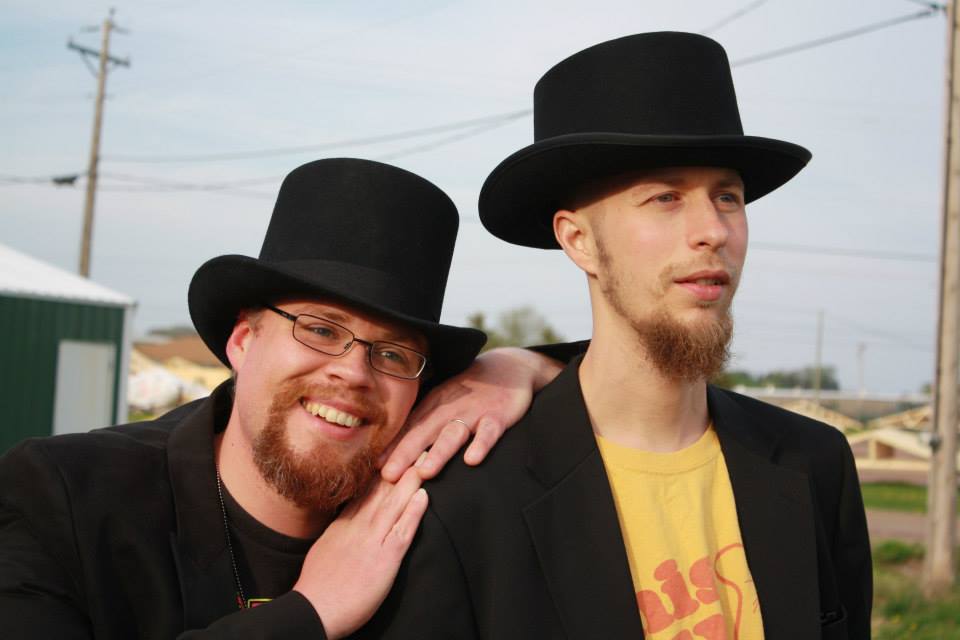 Cellophane Superstars are far from your average group. They are an alternative rock/avant-garde duo consisting of guitarist Aaron Kaplan and producer Ryan Summers, based in Central Wisconsin. They have an unusual backstory in that the members came together after their experiences involving religion and a New Age Cult.

Aaron, raised a Jehovah’s Witness, risked alienation from friends and family to escape from the church’s teachings. Ryan, although raised as an atheist, became involved in a New Age U.F.O. cult. Their songwriting centers on the emotional difficulties involved in the deprogramming process involved in leaving such mentally abusive groups.

This all sounds a deadly serious background to a musical project, but in fact Cellophane Superstars have a great deal of humour in their inventive music. They, to my mind, belong in a lineage of great American eccentrics, stretching back to Captain Beefheart (whose Magic Band also contained recovering former cult members), Frank Zappa, Sparks and They Might Be Giants, the latter two both being quirky duos also.

Genre-wise, they are hard to define, mixing rock, dubstep, pop, metal and electronica, sometimes within the same song. It starts with an ominous sounding introductory track that begins with the rantings of a preacher while church bells toll, before a pounding dubstep beat kicks in. Over dissonant low guitar chords, we hear a lengthy scream then the repeated chant “Just another W.A.D…..praise be to God….”.

Next comes the quirky pop of Swans Are Singing, which is seemingly about someone being entirely unaware of the situation of they’re in (possibly referring to cult/religious brainwashing).”This cocoon you made for yourself is about to be split in two….” goes the verse, driven along by rhythmic piano leading to an offbeat but catchy chorus: “The swans are singing in your ear, but somehow you don’t hear…”.

The spacey synth sounds in that song get free rein in third track The Flood, taking up the first two minutes of the track. A pulsing four-to-the-floor beat leads to a gorgeous section of swirling, classical-style piano arpeggios. This is an impressive and actually quite haunting piece of music, blending genres in an original way and featuring a fine vocal performance.

Next comes the title track which turns out to be one of the heavier songs on the album, with an almost Nine Inch Nails ‘industrial rock’ vibe as angular guitars and riffs duel with each other. The hook is gloriously simple but effective. It seems to be genuinely seething with anger as you catch lines like “Keep your head down, keep your mouth shut, that’s all they want in the end…”. The final minute is bizarre, the music speeding up as we hear female orgasmic moans over a jolly synth melody then a lengthy primal scream far more convincing than a thousand metal bands.

Dark Reflection is an epic at eight minutes long and further expands the electro-rock template with the melancholy lyrics full of regret: “If I could look silently and see what might have been, if I would turn the clock back and wash away my sin….”. There is a genuinely poignant moment halfway through as the music becomes hymnal and we hear the final refrain, “It’s a dark reflection, nothing to see…”, before it brightens up with a stomping beat for the last minute.

Imaginary Numbers is the Superstars at their craziest, bringing to mind the more eccentric moments of Todd Rundgren’s legendarily drug-fuelled A Wizard, A True Star album. Indecision, track seven, is slightly calmer but still bursting at the seams with all manner of demented noises. Musically, it is like a psychedelic waltz, but with a sense of claustrophobia, like someone wrestling inside their strait jacket.

As Seen On T.V. is a depressing/funny song that veritably drips with sarcasm, satirizing the mind-numbing effects of television and the general intelligence of the many people seemingly hooked on it. It features some absolutely gorgeous acoustic guitar work in the middle (the musicianship is of a high standard throughout). Audio samples from T.V. programs add to the satire, with, of course, a subtle dig at religious channels. Don’t Tell Anyone is rather more disturbing, a deathly slow ballad seemingly about child abuse: “Just tell them crashed a bike into a tree…we both know I didn’t mean to hurt you…“. The final minute explodes into life but the effect is menacing rather than uplifting.

Next, Some Human’s Ain’t Human is like psychedelic hip-hop but it’s a bad trip we’re on here, a mangling of electric guitars doing battle with electronic glitches and drones. The hook is one of the most memorable on the album and this track is perhaps the definitive example of the Superstars’ electro-rock fusion. Baptism By Immersion again references their difficult past and the mind-control that religions and cults involve, in a slow-paced epic with the telling lyrics “You gotta drown yourself to save yourself….” and at the end, “there is no final solution…”. Heavy.

This leads into the final song Worlds Between, a melancholy tale of resignation about a failing relationship consisting of just acoustic guitar, accordion and vocal for the most part. About five minutes in, a beat kicks in for one last uplifting chorus, and just when you think it will build into a guns-blazing climax, it peters out into a minute of bewildering sonic weirdness. And somehow that’s the perfect ending.

Overall, this is a very good, often challenging album that mixes and hybridizes musical styles in a genuinely inventive and original way, but also manages to traverse a wide emotional range. They come across as alternately humorous and eccentric, deadly serious and even morbid, sardonic and sometimes simply sad. It adds up to an emotional journey that takes some strange twists and turns but Cellophane Superstars have a story well worth hearing.

Stephen Vicino is the founder of MusicExistence.com. He created this site to give talented musicians a voice and a way to be discovered.
@@svicino
Previous Compassion
Next New fREEX Single “Birds” Lets Joy Fly