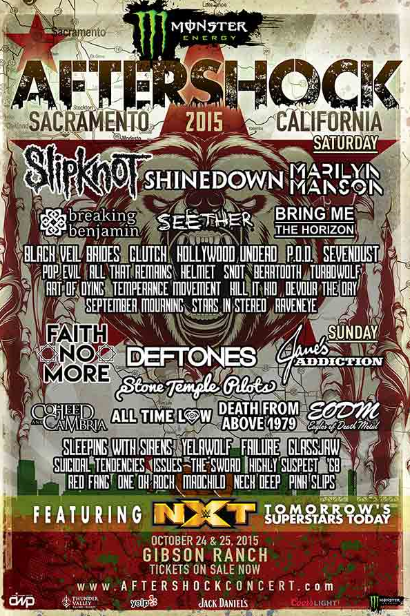 The addition to an amazing lineup that will feature something for every rock fan across four stages in two days is probably one of the most exciting inclusions to a festival in years: NXT. The Orlando based developmental field for WWE features some of the best professional wrestlers from around the world (Japan, Ireland, UK, US, etc.) and brought them to one organization and present a full production show with high energy, fan interaction, amazing lights and stage spectacles, and a current wrestling product that fans of the sport can get behind. Seeing Finn Balor’s entrance is worth admission alone.

This year’s Aftershock is scheduled to his Oct 24th and 25th at Gibson Ranch just outside Sacramento. Some of the performers have spoken about Aftershock and their excitement.

Corey Taylor of Slipknot says, “We are really looking forward to playing AFTERSHOCK in Sacramento! A lot of great bands—can’t wait to see everyone, from Manson to Clutch. Sacramento won’t know what hit it when me and my friends are through.”

Deftones‘ Chino Moreno says, “We’re looking forward to being one of the headliners at AFTERSHOCK this year and performing in our hometown. It’s always special to return to the city that made us.”

The daily band lineup for Monster Energy AFTERSHOCK is as follows:

Regularly priced weekend tickets go on sale Monday, June 1 at 10:00 AM PT at www.AFTERSHOCKConcert.com/Tickets and www.flavorus.com. Ticket prices will be as follows:

I cannot recommend this lineup or experience enough. This many bands + NXT Live + THAT MANY CONCERT GIRLS is something that everyone should get behind. If you are even remotely close to Sacramento in the end of October or are able to make the trip, then get your VIP tickets and go. It will be a weekend worth saving up for and remembering.

You can find more details at the following sites:

I am an album reviewer, band interviewer, concert photographer. At least once a week I review a new album in the rock genre the week it comes out (anything from alternative to metal). Check out my site at www.rockedreviews.net and my twitter feed @rockedreviews"
@http://www.twitter.com/rockedreviews
Previous The Tod Hughes Project – Changin’ Gears
Next YELAWOLF LIVE AT WOOLYS – DES MOINES, IA