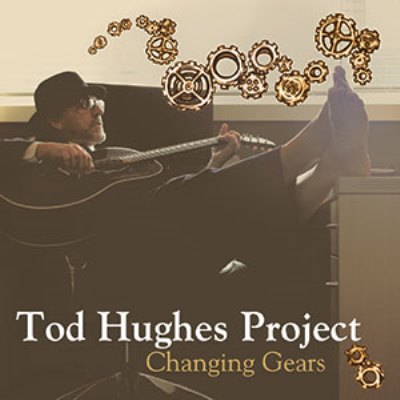 While country music continues a contentious, but profitable, transformation from backwater musical genre into a cultural force openly courted in the mainstream, it’s easy to forget artists like Tod Hughes in the shuffle. This isn’t strictly country, but it certainly owes much of its sensibility to the genre and one of the best songs on his new EP has a title like an outtake from a Johnny Paycheck album. Blues-fueled guitar heroics and Nashville twang collide here, but Changin’ Gears benefits from its light rock vibe too. The release’s musical foundation, however, isn’t far removed from what you might find in a honkytonk on a weekend night.

Nowhere is this clearer than on “Let’s Dance”. The exultant and life-affirming energy sparking off the track gives much needed impetus to a lyric contenting itself with superficialities. The guitar work, in particular, lunges from the mix like a knife. The lack of any urgency at all dooms “Follow Your Heart” from its first note. Despite the singer’s pleading about the importance of following your dreams, the music never conveys the same message. It contents itself with a relaxed mid-tempo attack that never reaches for much.

“Brad’s Song” suffers a similar fate. It’s disheartening to hear the inklings of depth in the lyric whitewashed by lax musical backing. Unfortunately, Hughes’ voice misses any opportunity to shore up the lack with an unfocused performance. “Just Sing” succeeds thanks to its stripped back elegance. Every facet of the performance moves within the confines of good taste; notice the melodic simplicity that helps weave great mood and atmosphere. “The Quiet” pushes far beyond the six string pyrotechnics in the opening track and gives Changin’ Gears a shot of pure rock and roll. Introducing new elements like wah-wah and organ move this far away from the other tracks and shows Hughes’ surprising diversity.

“The Only Person Who Won’t Drink with Me Is You”, titled as if a subconscious tribute to Johnny Paycheck, has every bit of the saucy and faintly fatalistic humor common in country music. The biggest factor in its success, however, is Hughes’ best vocal of the album that alternates between a sneer and a chuckle.

Changin’ Gears takes six songs to show significant variation and it’s a troubling fact. Hughes won’t be able to sustain a career on offbeat humor alone; eventually, the songwriting must carry water for his wit rather than the other way around. However, there’s ample evidence here to suggest Hughes is capable of such development.

Previous Interview with A.D.D: “All women have encountered something like this to a certain degree…”
Next Monster Energy AFTERSHOCK Lineup Announced! SLIPKNOT, FAITH NO MORE, MARILYN MANSON, DEFTONES & 30+ more!