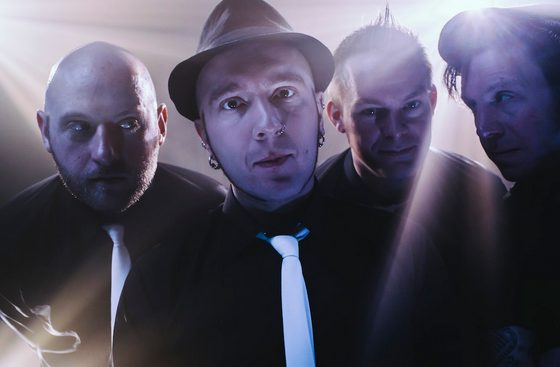 When you are a DIY band you have to be three things in order to be even remotely successful: 1.) Determined; 2.) Talented; and, 3.) Creative. So when Eureka Machines discovered their location to film their latest music video was flooded and needed to think of a new setting fast, they proved just how determined and creative they were by cramming into their tour van and filming the entire song shoulder to shoulder.

Leeds’ Eureka Machines have just released their fourth full album Brain Waves. One listen to their latest title track and you will completely understand the pop-punk style that these Brits have mastered. As a testament to their fanbase, their fans have entirely funded their newest LP in less than two hours of being launched online.

Focusing on mental health issues, Brain Waves the album has a strong focus on consistent energy in their music. There is a flow from track to track as well as within each song that is easy to get caught up in. The ranged vocals of Chris Catalyst throughout the album show a huge mood separation when comparing the high end style of Sleep Deprivation to Vulture of The Culture. The varying vocals somehow feel consistent though when backed by the extremely impactful drumwork and guitar riffs that carry Brainwaves.

There are thousands of bands who are striving to not be sucked into the dark pit of the music industry that is soul-binding contracts. When you hear bands like Eureka Machines pull through with such passion and have such support, it can be extremely motivating for both musicians and fans of the genre.

Overall, if you loved the styles of MXPX and I Got Fives, then you really need to listen to Eureka Machines’ Brain Waves and remember just how good it can be to hear musicians playing for a cause and relying on their merit at the same time – which is all too rare in today’s music scene.

I am an album reviewer, band interviewer, concert photographer. At least once a week I review a new album in the rock genre the week it comes out (anything from alternative to metal). Check out my site at www.rockedreviews.net and my twitter feed @rockedreviews"
@http://www.twitter.com/rockedreviews
Previous Gallery: Starset live at the Stone Pony Summer Stage, Asbury Park NJ 05.15.15
Next Half Hearted Releases “Flying & Falling” Music Video From Upcoming EP