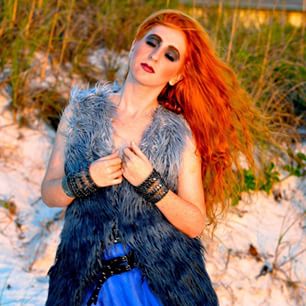 No matter what you dress something up as, you can never hide its true nature. Shayne Leighton markets herself as a passionate, imaginative performer with a rebel heart determined to follow its own path. Even an objective cursory listen to her six song debut EP, Invincible, blows that puffery to bits. She is a success-minded performer on screen and stage alike cannily co-opting a genre and audience with commercial potential. Invincible is, largely, a product of focused marketing, not artistry.

Everything on Invincible hinges on romance – the romance of self, with others, with the future. Leighton obviously aims “This Time” at a youthful audience of teenagers and early twentysomethings with whom her songwriting will find its strongest resonance. The song bungles its aims however and ends up a foul tip instead of a home run. It’s not unfortunate that Leighton believes these songs are best served by a hard rock backing, but what is unfortunate is that the backing is poorly produced and unconvincing. The situation improves some with “Dream of You”, but as the title makes clear, Leighton is still embracing hard rock trappings for what are, essentially, teenage pop songs of thwarted love and desire.

The album’s one unmitigated success, the title track, works so well thanks to Leighton’s powerhouse vocal and strict adherence to Pat Benatar’s original vocal. Her backing band turns in a superb performance and the production gives it the best possible forum for success. The next song, “Midnight Man”, never produces much tension despite the relatively clever arrangement. Leighton has spent much of her album creating the aforementioned “renegade” pose, but the songs aren’t here to support it. “Midnight Man” feels fat with those same calculated changes and warmed-over menace.

“Foolin'” is a welcome turn after “Midnight Man” as its back-to-basics hard rock approach is a breath of honesty blowing away its uninspired predecessor. It isn’t revelatory in any way except one – if she hasn’t already, Leighton convincingly proves she is a first class rock singer with her powerful wailing here. “Wolf at the Door” is, perhaps, the album’s best band performance. Atmospheric guitar work sets the stage for star turns from the bassist and drummer alike. Their fluid work in tandem gives Leighton a great foundation for one of the album’s stronger lyrics.

Marketing spoils anything. If I could wish anything for Shayne Leighton’s career, I’d wish that she told anyone giving her artistic advice to piss off and she’s going to follow the words and music in her head, no matter the cost. There is too much disguised pandering here, too much loyalty to dead formulas. Leighton sings like she’s capable of much more.