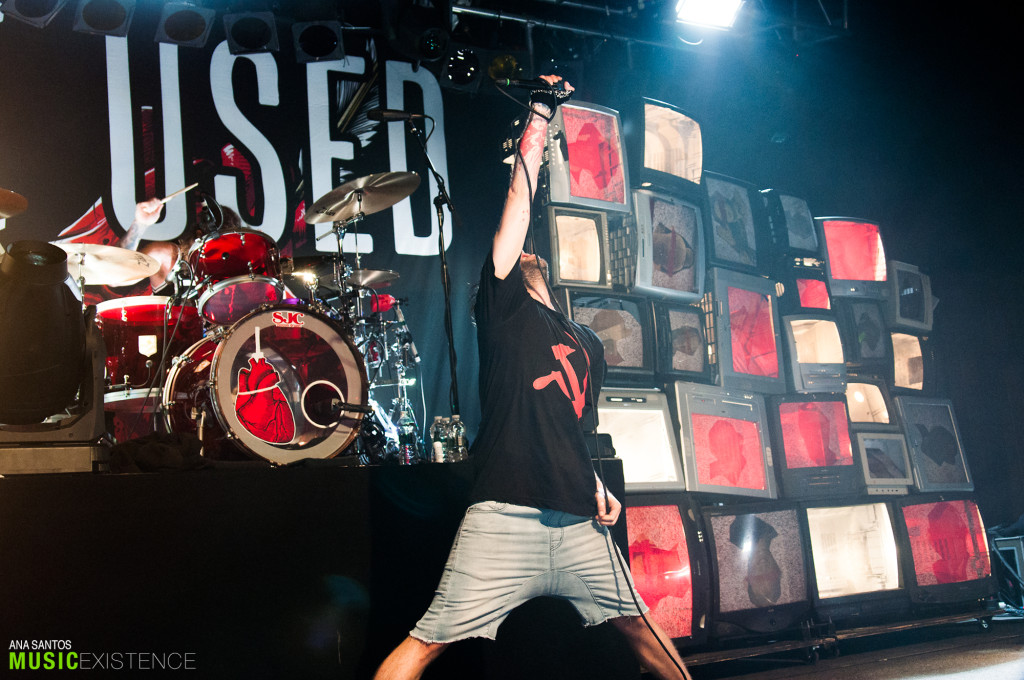 Post-hardcore Utah natives, The Used brought a formidable show to NJ’s Starland Ballroom on April 21st. The band is touring North America in support of their sixth studio album Imaginary Enemy (April 2014), and they’ve brought on a diverse bill of supporting bands that have intensified the tour’s flavor.

With a roster including California’s The Eeries, UK’s Marmozets and New York’s Every Time I Die kicking off the night, it’s a tour with something to please every palate. But it was undeniable that The Used stole the show. Between the creative stage production consisting of two stacks of old tube TV sets flanking the elevated drum set, the remarkable lighting and the band’s incomparable energy, this is one you won’t want to miss.

I have been wanting to catch them on tour for the last several years and was not disappointed—nor were the hundreds of fans that made it out on a Tuesday evening to catch the adrenaline-frenzied performance. Front man Bert McCracken was all smiles as he took the stage and immediately reached out to the flurry of outstretched hands on the barricade. This set the tone for the night, which I found incredibly cool because while McCracken threw himself spastically across the stage in an unbridled outpouring of energy, he always knew just when to reign it in and address the fans. And don’t think that the high-energy performance took anything away from the vocals, not in the very least. The Used is one of those bands who, I find, sound even better live than they do on their studio albums.

They played through a perfectly balanced set list of old and newer songs such as “I Caught Fire,” “The Taste of Ink,” “Revolution”, all of which were received with fists in the air and a cacophony of cheers. It was during one of those moments when the room buzzed with such energy and the crowd was screaming that McCracken took a few minutes to thank the fans for fifteen years of support. It’s “passion for the music”, the singer stated, that kept them going this long and it’s not hard to believe.

There was no doubt that The Used were having the time of their lives up there; loving every minute of it now as they did a decade ago. It’s unquestionably what keeps fans coming back and filling venues at every city across the country.

Tour dates stretch well into May, with supporting act Chevelle starting May 5th in Nashville. Visit theused.net/tour for dates & ticket info and make sure to pop in at a show in a city near you!

Check out our photos from the show below!