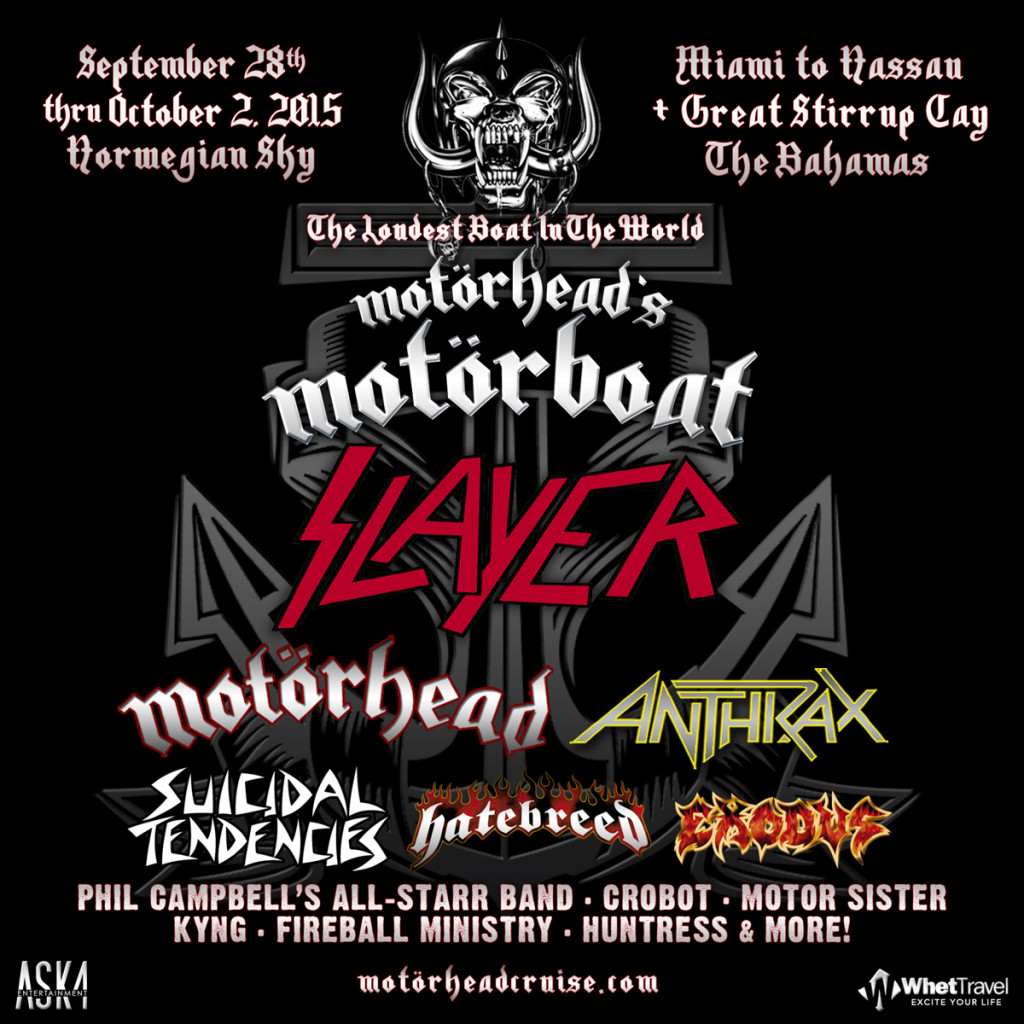 Motörhead’s Motörboat will embark on its second voyage September 28 through October 2, 2015 on Norwegian Sky, departing Port Miami, with stops in Nassau and the private picturesque island of Great Stirrup Cay in The Bahamas. The Loudest Boat In The World will feature performances from some of the greatest heavy rock bands in the world, including Slayer, Motörhead, Anthrax, Suicidal Tendencies, Hatebreed, Exodus, Crobot, Phil Campbell’s All Starr Band, Motor Sister, KYNG, Fireball Ministry, Huntress, and more.

Motörhead’s Motörboat offers guests a once-in-a-lifetime opportunity to share an experience with their favorite bands and to see unforgettable performances on various stages throughout the ship and on the island of Great Stirrup Cay.

Motörhead founder Lemmy Kilmister says, “And so the Motörboat sets sail one more time – better get your tickets now, or be left sobbing on the dock! Oh – and we promise not to run out of beer this time!”

Slayer’s Kerry King says, “Slayer is crashing the Motörboat party!! I, personally, will be keeping the bar in business. Hell will be coming with us. Light it up!!!”

Motörhead–the world’s biggest and baddest rock & roll band of all time–are celebrating their 40th anniversary and recently returned to the studio to begin work on their 22nd studio album. The band’s song “Heartbreaker”–from their mammoth Aftershock album, which debuted at #22 on the Billboard 200–was nominated in the “Best Metal Performance” category at this year’s Grammy Awards. In 2005, Motörhead won the Grammy in the same category for the song “Whiplash.” Through tenacity, hard work, and a deep-seated ability to produce an original, face-melting sound, Motörhead–Lemmy Kilmister (bass, vocals), Phil Campbell (guitar) and Mikkey Dee (drums)–has become one of the most popular bands in the world with a fanbase that is second to none. www.imotorhead.com

The Chicago Tribune’s Greg Kot wrote that the five-time-nominated, two-time Grammy winning Slayer is “one of the great American rock bands of the last 30 years, forget about genre.” Indeed, few bands come close to matching the intensity that Slayer brings to its live shows, having been named “Best Live Band” by numerous media outlets including Revolver, SPIN, and Metal Hammer. With songs that mirror the turmoil and aberrations of our society, Slayer remains crushing and brutal, steadfastly refusing to cater to the mainstream. Slayer recently formed its own label imprint that will be distributed worldwide through Nuclear Blast, and plans to release a new album in 2015. Slayer–Kerry King (guitar), Tom Araya (bass/vocals), Paul Bostaph (drums) and Gary Holt (touring guitarist)–will tour extensively to support the new music. www.slayer.net

2015 marks the first excursion on Norwegian Sky for Motörhead’s Motörboat. The contemporary ship offers 13 complimentary and specialty dining options, 12 bars and lounges, a coffee bar, an outdoor pool, and five hot tubs. While onboard, guests can try their luck in the Sky Club Casino, relax in the onboard spa and get their heart pumping in the fitness center or full basketball court.

For the debut Motörhead’s Motörboat cruise in 2014, an international, multigenerational audience from over 30 countries came together to celebrate the legacy of the cruise’s iconic namesake and escape into five days of true rock ’n’ roll living with no holds barred. Highlighted by a pair of ear-splitting performances from Motörhead themselves, Motörhead’s Motörboat 2014 featured more than 30 performances by 15 of rock and metal’s top artists, including heavy metal all-star band Metal Allegiance, Anthrax, Testament, Down, and Zakk Wylde.

About Motörhead’s Motörboat: In 2014, the first annual Motörhead’s Motörboat sailed from Miami and visited the port of Cozumel just off Mexico’s Yucatan Peninsula. An international, multigenerational audience from over 30 countries came together to celebrate the legacy of the cruise’s iconic namesake and escape into five days of true rock ’n’ roll living with no holds barred, highlighted by a pair of ear-splitting performances from Motörhead themselves. In 2014, “The Loudest Boat In The World” also featured performances from Anthrax, Metal Allegiance, Testament, Down, High On Fire, Kill Devil Hill, Zakk Wylde, Jim Breuer Band, Danko Jones, Fireball Ministry, Wilson and Cilver, as well as a spoken word performance by legendary heavy metal musician, author, and television personality Scott Ian. 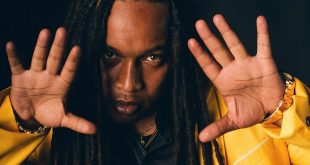