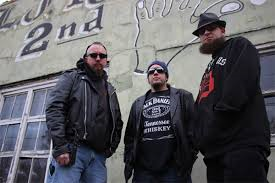 If Fearless is DogHouse Swine’s debut CD , it is a good start. The band sound like seasoned veteran who know each other’s every move. As musicians, it is a wonderful feeling when all the members are in the groove

or in the pocket as some people call it. The songs, in their totality, give nods to hard rock bands like AC/DC and punk bands like The Sex Pistols while keeping up the tradition of back-beat 4/4 rock blues feel of a ZZ Top.

While there’s nothing all that original offered on this album, I can’t help but think DogHouse Swine has a lot of potential for future releases, especially if they put some serious time in the studio. The recording sounded a bit rushed. Maybe there was a lot of tension in the studio. This happens to performing bands all the time. They play in the moment and don’t worry much about the little things like string buzzing, the singer went flat on that last bar, or stick hitting. That is way many great live bands can’t make a decent album because the actual recording of the album requires you to sweet every detail.

Vocalist Ian has a voice made for this style and if he puts serious time into developing control of his voice, he’ll be a major contender.

Guitarist Ian has both style and flair, approaching the musicianship of greats like Steve Ray Vaugh, Billie Gibbons, or Eddy Van Halen (well, maybe not Eddie).

The drummer, DeBellis is also worth mentioning. He keeps the beat with metronome-like precision while claiming each song with his own brand of percussive flair, providing a deeper substance to the music. His work really holds the band together. They are already on a runaway train so I have to give him props for his efforts.

All in all, Fearless is worth a listen for anyone with an appreciation for punk/ rock. Those who love more contemporary rock might find it interesting to listen to a controlled train wreck.