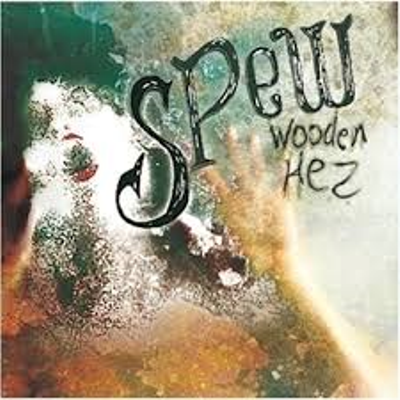 This is an album of considerable daring in our day and age. Long after rock and roll has reached a cultural sell-by date, true believers like Wooden Hez are actively writing and playing with ideas of extending a form currently carrying all the cachet of an eight-track tape. Wooden Hez rarely concern themselves with abiding by traditions and observing rules of form. Instead, this is music attempting to refurbish the past for an uncertain future and, not least of all, satisfying the personal needs of its creators. Parlor games are dangerous in music reviews but mining such internal music from autobiographical veins isn’t uncommon. And if it is not so, no matter. The suggestive is enough to raise the album’s intensity.

The band’s third release Spew peaks early with “Old Skin”, a harsh blast of dissonant firepower with singer Dave Pitone’s constricted vocal seemingly reaching out of a cloud. Wooden Hez conjure menace and foreboding with ease, but it isn’t over the top heavy metal poses. Strong melodies with minor key voices are the band’s stock in trade and an important part of this song’s success. Alan Lee’s bass playing is a big part of why “Punk Rock Jack” works so well. His playing gives clear direction to music that often shows an inclination to wander and his chemistry with drummers Ed Galang and Eric Cistaro is evident.

“Old Same Old” comes in with a slow, sneering strut and Pitone’s reverb strained slur helps give the song more bite. His vocal erupts to spectacular effect on the chorus.

“Let’s Drive Tonight” pulses with understated urgency. It stands out as the album’s fastest pace and the keyboard-laden choruses reminded me of the best mid 80’s English pop rock, ala Talk Talk. This quality gives it surprising commercial accessibility and shows the band’s talents are far from confined to tortured alt-rock. “Killing Streets” drives that point deeper home. The band measures out this song with patience that immediately rewards the listener. This song dips through a variety of emotions – brief moments of exaltation, sentimentality, and hard-eyed pragmatism. Another musical highlight here is the tremendous drumming from Galang and Cistaro so important to its pitch perfect pacing.

“Hare Krishna” is the sound of a band without fear. Many rightfully consider the collision of folk-minded acoustic guitar, impressionistic lyrics, and sound collages a recipe disaster, but Wooden Hez end Spew with a highly unusual and brave experiment. It is a fitting conclusion for an album marked by risk. Wooden Hez are possessed with the confidence to continue growing rapidly artistically and Spew represents another great leap into the future.

Previous Lupe Fuentes Drops Hot, Minimal Deep/Tech House Single “Holla If Ya Hear Me” Out NOW On In The Loop!
Next New Single: The Unraveling – Revolt