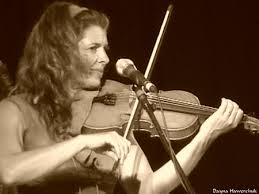 If you need a break from all of the styles, genres and other trappings of the current musical climate, Anne Lindsay’s Soloworks will be a breath of fresh air amongst the stagnant scenes. This auteur of the violin and fiddle is a sorceress of sound, conjuring up feelings that range from the mystical to the Earthen.  The compositions range from American standards to classic radio songs to mountain music you’d hear during the Civil War to Russian interpretations, Swedish arrangements and much, much, much more.

For those that haven’t heard of Lindsay’s past works, she has three prior albums including her most recent release Hurry on Home, where her son Tosh Weyman acted as producer.  Anne isn’t afraid to experiment with genres that would at a glance seem musically incongruent with one another, for example the Russian/American hybrid playing heard on “Pilgrimage to Pushkar” evokes images of the frost-bitten Big Bear’s liveliest traditional numbers in tandem with eliciting visions of 1860s Americana.  The mixture is exotic, brave and full of Lindsay’s vibrant sweeps across the strings.

Every song is a journey and the way they are sequenced throughout the album illustrates that the record as a whole is a sojourn with a very specific destination.  The downhome aura of old fashioned moonshine music comes through with extra proof on songs such as “The Dusting Rag,” “Dogs in the Hollow” and “The Three Bears.”  She changes the season on “The Cold Told a Tale” by remapping her imagery to a chilly winter in the heart of a coal-mining town, although the lyrical content tells not of famine but of giving and the Christmas spirit.  Everything change in tempo when mixed with the catchy songwriting and sound orchestral drama proves that Lindsay is not only a player but a songwriter as well.  Though much of the album is instrumental, the violinist sings like a fair maiden on tracks like “The Cold Told a Tale,” opener “Seas Will Rise” and the charming rendition of Smokey Robinson’s “You Really Got a Hold on me.”  Her vocals are rich with passion, always a pleasure to hear when they are utilized.

The majority of Soloworks vast stretch of music is dominated by the violin/fiddle playing.  There is no argument that the playing is impeccable and other accoutrements include piano, percussion, a little cello and even the borrowed sounds of the animal kingdom.  Mood and how it is presented is not just a minor part of the recording, but it turns out to be a key element that ties things together tautly.  Whether Anne is delivering her grandeur with a whisper and soft ebbing wonder on “Roro/Sweden Seven,” going full-tilt boogie in the “Spy Czar” or dropping an absolutely gorgeous variation of “Amazing Grace” the point is proven that she is incapable of striking a sour chord.

Soloworks won’t be for everyone, as this type of music requires a bit of patience and persistence to really get into.  What I will tell you is that I am largely an old rock and roll fan, yet I found myself completely bewitched by the playing heard in these songs.  Anne Lindsay is really capable of tackling any style and this particular has always had an affinity for the pastoral soundscapes.  This overall a great album, if you are ready to take the ride that is.