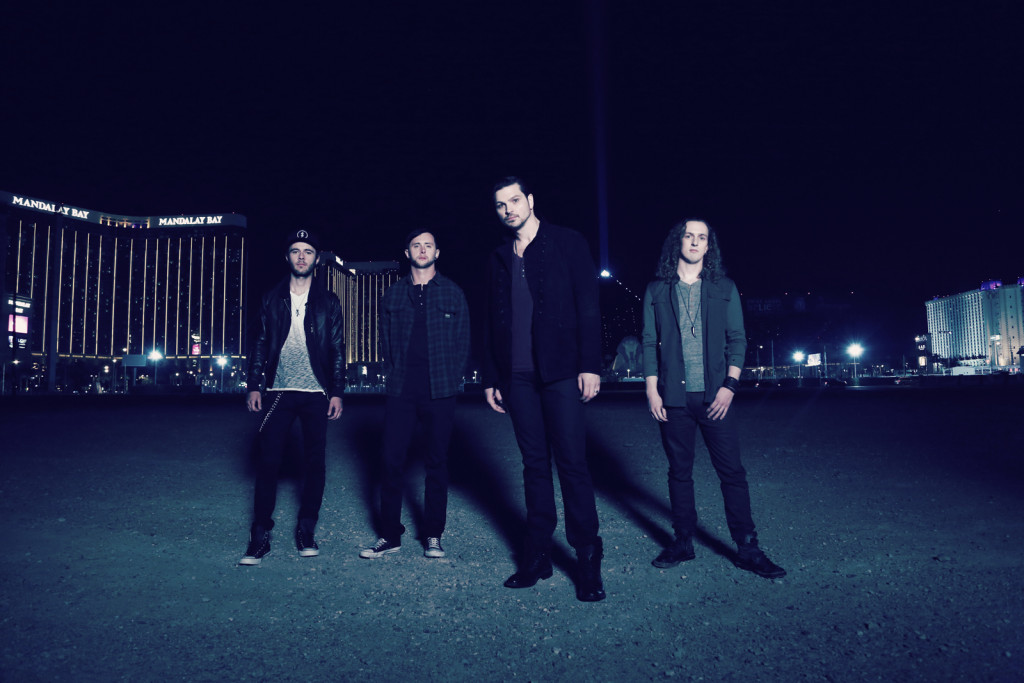 Las Vegas-based hard rock band, Adelitas Way has enjoyed a long string of achievements since breaking into the scene 8 years ago. “Invincible,” the lead single from the band’s self-titled debut album became an instant Top-10 hit, appearing in numerous television spots and propelling the band into mainstream popularity. The band’s sophomore album, Home School Valedictorian sold over 150,00 copies and one million singles, producing four Top-5 singles, including two #1 hits. Their third album, Stuck had the band working with Grammy Award-winning producer, Nick Raskulinecz (Foo Fighters, Marilyn Manson, Evanescence), which went on to spawn the Top-10 single, “Dog on a Leash.”

In addition to their own hits, the band has toured with numerous rock heavy hitters like Guns N’ Roses, Godsmack, Breaking Benjamin and The Pretty Reckless, playing on the main stage of every major rock festival in the US numerous times. Despite their achievements, Adelitas Way still strives to be better then ever, a statement the band makes with their latest release, Deserve This. Originally slated for March 17th, the band surprised fans and critics alike when they released the EP a week ahead of schedule. Eager to learn more about this new release, Music Existence spoke with Adelitas Way’s  frontman, Rick DeJesus, who discussed the new EP, life on tour, his opinions on the modern music scene, their pledge music campaigning and their upcoming 4th album.

ME: You’ve achieved so much in the years since your debut: numerous # 1 hits, songs that have appeared in TV spots, video games and featured films; you’ve toured with real heavyweights and have worked with a Grammy Award-winning producer. That’s pretty impressive! At what point in the band’s career did you guys feel as if you were finally living the dream you were striving for?

Rick: You know, I think we felt that early on there’s a difference. The minute you’re out there playing for the fans and feeling their energy, yeah, you walk on stage and there’s nothing like it. But we still feel like we haven’t made it yet. We feel like we haven’t gotten to the point of where we want, of where we shoot for ourselves. We still have goals to be better than ever.

ME: What are some of those goals you hope to achieve in the near future?

Rick: We paid our dues early and we did a lot of supporting for other bands but now we want to headline and play for places that love us and show us love once or twice a year. We don’t want to be a band where people are like, “Well, I missed them this time. I guess I’ll see them next time.” When we come to a town to play a show, it’s a fun night. It’s a special night. We want to make sure people remember it. We want to be the standard of that.

ME: Did you experience any major challenges during those up-and-coming years as the band was trying to get its name out there? How have those challenges helped shape the band into what it is today?

Rick: Oh my god, yeah. You experience major challenges just every step of the way. The whole thing’s a challenge, so we know how things are done. We know what works. I think that’s why we’re the entity we are. We show up to places, we’re efficient, and then we rip the place down with our performance. I think that’s the reputation that this band has.

ME: Adelitas Way has toured with a number of rock heavyweights. What lessons have you acquired throughout the years of touring with so many different bands?

Rick: There’s like a tour bible. There’s just innumerous laws of the road from all these bands on what’s supposed to be done, what’s not supposed to be done, so you learn both ways. There’s a lot of little things that go into shows that are important to make sure the details are there. That’s what I strive for. It’s a big production to get ready and not even just from a production side, just technically to get the audio out and the band on stage. It’s a whole day’s production to get ready to put something on stage every night. Everyone’s working toward that so when the show goes down, the room is just full of electricity. I have so many great moments. You get to travel and see the earth and see how beautiful it is and we get to really see a lot of places and try new things. And wherever you get to travel and enjoy music and the rooms are full of people who are coming out to see shows, I love it. You feel nothing but blessed. The most memorable moment of each tour is how many people come back to see us again.

ME: Adelitas Way is releasing its first EP fully funded by the PledgeMusic campaign. After eight years in the business, what made the band decide to go the PledgeMusic route this time around?

Rick: Because we were at Virgin Records for seven years, and in seven years you can learn a lot by doing everything and the one thing we always feel we have a problem with is stuff that tries its hardest to separate us from each other. When we get on stage we feel what we’re doing together. We feel the energy we’re doing together. We try to also incorporate that into our music or when we write our songs, our records. When you’re on Virgin Records, they want things done the same way they’re doing for 3,000 other bands. We think we can do something greater than those bands. We’re being bold. We want to release music and we’re tired of doing things the way they’re doing it for other bands on the label. It’s important to us to not have to constantly answer to someone to release music we’re excited about releasing to our fans.

ME: Did you find it easier to do things the way you want when you aren’t on a major record label?

RIck: The honest answer: they [the record labels] had a better grip on controlling everything that was going on. Back in 2006, 2007 if you were a band and you wanted to do everything, [the record label] had a better grip on being gatekeepers. They had a better grip on the market. But now music is free. It’s almost a showcase for shows; it’s almost a showcase for live performances. Now the record company is slapping your music up on Spotify and Beats Music and everyone is just running and listening to it there, so for me it’s like, “I can do that.” I don’t mean to dog record companies. I had some great moments with those companies, but I’m just trying to be innovative for the future of my band, for the future of my family, and after seeing that whole tenure on a major level, the best decision for me right now is that I kind of dig what’s going on, and people are turning to Spotify. It’s the best thing in music right now. We’ve tried things everyone else’s way and we’ve had success for the past eight years, but, we just see the [music] business going in a different direction and want to do something bold ourselves. And by bold we mean, we want to release the band’s music when we want. It’s not that difficult of a process to make something you love and then when its ready to be heard you just let it be heard instead of having this recording hidden behind closed doors for seven months because you want to tease everyone for six months so you push it back. Just give people the music, man! You’re competing with 200 million other songs on Spotify, you gotta keep people engaged with what makes them love you. They love an artist for a reason and you gotta connect with your fans through music and release the music.

ME: So going the PledgeMusic route was a better way to connect more with your fans?

Rick: It’s more that we trust our fans more than we trust corporations. We believe in our fans and we believe in ourselves and it’s a combination we feel is a pretty deadly one, so we were like, “let’s go for it!”

ME: Is that why the new EP is titled, Deserve This?

ME: Did those feelings help fuel the creative process for Deserve This?

Rick: Well, I thought everything we were doing was positive. I was very excited to do what we were about to do. I was very happy and very invigorated so I wasn’t writing angry songs, they didn’t effect me enough. We were glad to be able to move on and release music we wanted to do, so the vibes on [the EP] are just how I’ve written every song I’ve ever written. I wrote what was coming out of me and what I thought I had to say.

ME: Your first single of this EP is “I Get Around.” Of all the songs, why was this chosen as the lead single?

Rick: Because it has a good feeling. Whenever I play it for anyone they want to hear it again. When I played the song for everyone, it really had a positive reaction and it sounds like us. I think there’s just some songs that you connect with even if you don’t want to. It’s obvious that people are having sex with the billions of people in this world. I do think that for everyone in this world, including myself, “I Get Around” strikes a little nerve. It triggers that little spark when they hear the song. When I was younger I definitely went all out, with compatible people or not. I tested the waters. When I look back at my life now I think, ‘man I have a family now,’ but when someone asks me to think about it now, I think, ‘man, I got around more than I’d like to.’ I’m not ashamed when I say in the song I get around. People out there are probably saying they get offended that I say it, but at the end of the day the song is about me and whoever had the same experiences as me and my band.

Rick: I don’t think it’s that complicated. I had fun and we worked extremely hard on [this album]. We tried to react off each other to make songs that sound different and have their own vibe. Sometimes you just have to close your eyes and feel that shit, man. That’s really what it comes down to: what you’re feeling and what you’re not feeling, of being inspired. When something’s great, it inspires a lot of things; it doesn’t have to be forced.

ME: Is there a stand-out track on the upcoming album?

Rick: I just want to keep the train rolling. We want to top the charts, headline tours and start getting over internationally. We’ve got big plans. We’re going to do everything to make sure our shows are special every night and have got that electricity to make sure we leave no stones unturned. That’s where our heads are right now. We strive to make something that everyone in that city is stopping what they’re doing ‘cause we’re coming to town to play a show and everyone knows that’s the best thing that’s going to go on in that city. That’s our goal.

I Get Around Single

For the latest news on Adelitas Way, visit: 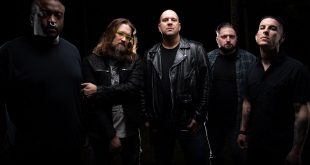 HE WAS A GOD Reveals Official Lyric Video for “Amadeus”