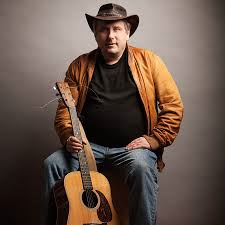 This CD “Better Late Than Never” by B.C. Canada’s own Paul Kloschinsky is sure to one day be remembered as one of the classic good timing Americana-Rock CD’s of recent time. Its pure rocking Americana magic the way it used to be, full of cautionary tales, and a passion for life and life on the road. All of this describes Kloschinsky to a “T”, So who is Paul Kloschinsky? In his own words: I am a Folk Rock Singer Songwriter from Delta, BC, Canada. I won the 2007 MusicAid Award for Best Canadian Songwriter for my original song Wearin’ Blue. My first album, Woodlands, was released in February, 2009. My second album, Like Your Hero, was released in early 2013. My third album, Better Late Than Never, was released in January, 2015. In addition to being a songwriter, he is also an avid poet and photographer. Well in my own words: He’s a songwriter who draws on life experiences from both the interior and exterior vantage point.” His narrative lyrics and sincere performances offer an unobstructed view into the heart of an artist who embraces each moment. “Better Late Than Never” finds Kloschinsky in a comfortable middle ground between the more tender musings of the title track and “Give ME A Sign”. From track 1 ”Across the Sea” to the end this latest 10 track release hits on all cylinders with a fun musical landscape full of power and happy go luck overtones. Some songs are about lost love no doubt while others are about life’s sweet victory. One thing that impressed me the most about this album/band is the sheer impassioned Alt-Rock-folk vibe one gets. There’s a Rock ambience that really sucks in the listener, but also hints of Acoustic-Rock-Pop. The CD is not so professional grade – a bit un-professional sounding. It also has a solid feel reminiscent of Alternative Rock popular in the early nineties as well. Kloschinsky reminds me of Justin Townes Earle, Wilco, Neal Casal, and Jason Isbell. Despite this I can also hear more modern Amos Lee, Joe Purdy, Alexi Murdoch, David Gray and Brett Dennen. Kloschinsky is a pretty solid player across the board and is kind of a jack of all, master of none. I also always said you can sell what you don’t truly believe, in this aspect Kloschinsky seals the deal and captures some Lighting in a Bottle via his amazing vocal touch that will ring true not only for older more experienced listeners but new ones as well. My favorite tracks: “Across the Sea,” the title track and “What Good is Love to Me” actually spoke to me personally.

Criticism: I recommend Kloschinsky get hire a “full blown” production team that can overhaul his present sound a bit. His songwriting is fine but he could use some vocal lessons to get the most out of them. If he can upgrade the above issues he will be right on par.

“Better Late Than Never” wraps up a well rounded 10 track line-up that delivers an interesting cross section of classic Americana Alt-Rock, and Classic Pop-Rock. Once again – despite this it is accessible to modern day listeners as well. How is this possible? Only an experienced artist armed with an honest, genuine, sincere approach like Kloschinsky can pull it off. I know I said it before but Kloschinsky possesses solid playing and production instincts with a sincere writer’s touch and an acoustic guitar stance he proves where there is smoke there is fire. Need I say more?