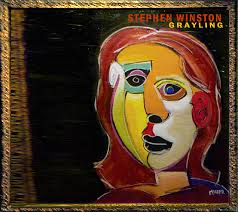 In this review, we’ll be taking a look at the new album ‘Grayling’ by Stephen Winston. In an indie atmosphere of a myriad of singer songwriter acts, Winston attempts to differ from the rest by providing the “classic 70’s singer-songwriter vibe to a contemporary culture sorely in need of his kind of heartfelt and emotional musical storytelling.” Immediately, this self-description of Winston draws comparisons to the early 1970’s acoustic singer-songwriter era of Joni Mitchell, Harry Chapin, Jim Croce, and the like. How does Winston stack up to that comparison?

‘Grayling’ offers a pretty expansive listening experience clocking in at thirteen tracks. ‘Roman Road’ introduces Winston’s sound with a fairly full band. He’s not simply donning an acoustic guitar like his 70’s singer-songwriter counterparts; there’s a full band equipped with backup vocalists and everything. This stylistic choice is probably a sound one, because a solo approach is difficult to sell to a contemporary crowd nowadays. ‘Roman Road’ is a beautiful start to the record with excellent instrumental performances.

‘Falling Apart’ adopts a bit more of a contemporary jazz styling, a stark contrast from the opening track. It works, though, and it swings nicely. It’s also the track that Winston’s marketing is pushing as the ‘focus’ track, and it does an apt job summing up the sound of the record. ‘Trains in Utah’ boasts a sparse brass section amidst quaint lyrics and piano lead. At this point, it’s also probably worth mentioning that Winston is also a decent vocalist; he’s got a bit of a Phil Collins vibe to him on some of his tracks. (‘No Goodbyes’ comes to mind.)

It’s a long album, so we won’t tackle all thirteen tracks individually, but rather, speak a bit more broadly about the sound of ‘Grayling.’ The title track is a memorably good song, as is ‘Tender Bar.’ Now, though, I want to let out the inner history-buff to help everyone understand Winston’s influences and whether or not they’re as needed in our culture as he so claims.

The 1960’s were a turbulent decade, especially socially and politically. All of that vigor was supercharged into the music of the time, and it shows. It was the time of ‘We Shall Overcome’ and ‘The Times They Are A-Changin.’ After a decade long fight with society, though, that generation subsided their pursuit of trying to change the world. They’d seen two Kennedy’s shot, and they’d buried one too many heroes. So, the generation that once protested to ‘Blowing in the Wind’ returned home to tend to their gardens.

When they went to tend to their gardens, their music did as well. The early 1970’s singer-songwriter was born. Introspective lyrics, slow tempo songs, and storytelling were king in an era of Harry Chapin, John Denver, Joni Mitchell, and so on. They didn’t want to write a song about the war or about racial conflicts – they wanted to write silly love songs and talk about their feelings. The 1960’s burnt them out. (Historically, this didn’t last too long since the British got impatient and developed glam rock the likes of David Bowie and Roxy Music.)

Anyway, there is a very meaningful point to this history lesson. At the time, this type of music was desperately needed. It cooled off a beaten down generation and got them in touch with themselves. I’m not sure if our contemporary scene needs that right now, however, as Winston claims it does. His record is great, and it’s easy listening music, but at no point did I jump out of my chair to hit rewind. It meandered, much like a John Denver record. (It’s okay John, I’m a Colorado boy and I still love you anyway.)

My point, is that I don’t think this music is something our culture is seeking right now. I think it’s meant for a niche audience that’s still holding onto that few years of spinning Harry Chapin records until they knew the lyrics of ‘Taxi’ by heart. For that audience, ‘Grayling’ is an exceptional outing. For those seeking something they haven’t heard before, something that’ll make their hearts flutter and populate their playlists… this may not be it.