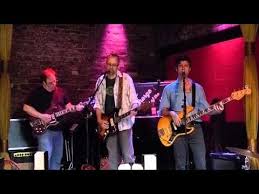 Last Charge of the Light Horse

Nine Kinds Of Happy by Last Charge of the Light Horse

Last Charge of the Light Horse is a New York based group formed in 2004 by singer Jean-Paul Vest. The group has remained in constant motion for years and they don’t ever plan on quitting. This group is never one to stick to the same style. They’re always changing it up and they’ll always be impressing their fans. The group has released two albums, one single, and one EP, gaining them mention in several “Best of the Year” lists and a lot of heavy rotation on college radio stations, where they charted as high as #1 on stations around the country.

Last Charge has an amazing selection of songs on their new album New Kinds Of Happy, but these three are the ones that stood out to me the most, and here is why:

“This Is Where,” is such a spunky tune. I’m not even sure what genre to classify it as. It sounds modern, but country. There are many things about this track that draw me to it, and one of those is the background music. It even sounds a bit Bollywood at times. I love the diversity in this track, and it will appeal to many different types of listeners and that’s where Large Charge will gain exposure.

“Anyone Else,” is slow and easy-going tune. I really favor this one because it’s just so calming. It’s a song I would play on repeat when I’m going to sleep. It’s so beautiful and the bongo drums in the background give it the perfect amount of spunk.

“Slow as You Can,” has more guitar than the other two tracks and I really like it. It’s such a cool rhythm and it makes me want to keep listening. Vest’s vocals blend beautifully with the soft guitar riffs and the drums. It sounds so mysterious and I just can’t stop hitting the repeat button. This is definitely my favorite track on the album.

If you enjoyed listening to Last Charge of the Light Horse’s album Nine Kinds Of Happy, you might want to check out some of the following artists below;

Miles to Dayton – “Letter, to You and Me”

The Corduroy Sky – “The Right Hands”

Last Charge of the Light Horse has such a calming vibe and I really enjoy it. This is truly “feel good” music and it makes me smile. I really see the potential in this group, and I believe they will definitely get somewhere in the industry if they keep it up. I hope to see them succeed and continue on the path they are on.