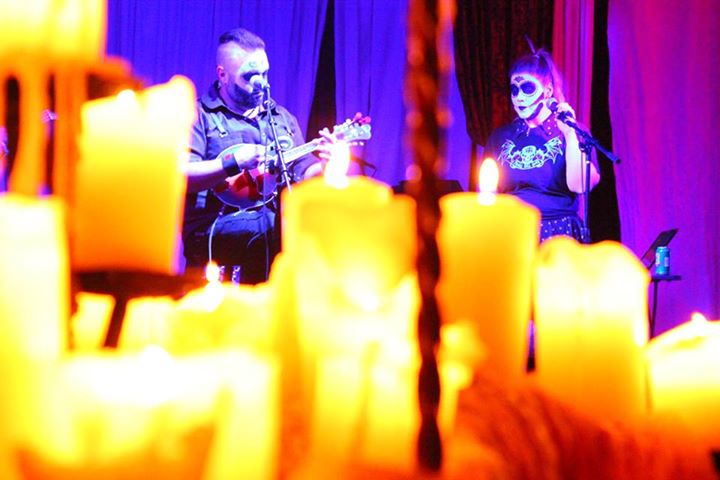 Award winning singer/songwriter Nic Nassuet has had a long history with music and the dynamic dramatics that truly pull a listener right to the speakers. Practically raised on-stage; he’s starred in challenging & pivotal roles in critically-acclaimed musicals like Sweeney Todd in “Sweeney Todd: The Demon Barber Of Fleet Street,” Terry Connor in “Side Show,” and the original rock-musical “Doomsday Cabaret.” His stage presence and powerful voice echoed his passion & dedication to his craft.

Combining his natural talent for vibrant, dramatic performance with his love of music, Nic Nassuet went on to be the front-man for several metal & punk bands before eventually going his own creative route. Drawing on his life-experience Nassuet’s music often finds itself rooted in the dark, mysterious & melodic. He makes music that perfectly captures the despair & hope in our humanity, and communicates it flawlessly through the strength of conviction in his voice and energetic connection with audiences.

With word spreading about his unique hybrid of acoustic music, Nic’s fan-base grew quickly. Combining elements of traditional Celtic-music, blues, rock, grunge, folk, punk, and gothic rock; Nassuet continued to make music that is full of genuine emotion and darkly-sweet authenticity. His music has been featured in clubs in the US and Canada, on FM radio stations around the world, and on compilation albums. This has further led to Nic scoring supportive & favorable reviews and interviews in publications like Jampshere Music Magazine, Backstage National Edition, The Denver Post, Model on a Mission Magazine, ET Entertiwne, Crossradar, and many others.

Recently Nic signed with indie label, Dirtshack records, was accepted into the Recording Academy (Grammys academy), and won an Akademia Music Award for Best Folk/Alternative Rock song. Today finds Nic more inspired and creative than ever before. Continually challenging himself to create new sonic textures and beautifully-dense musical-atmospheres, Nassuet uses acoustically based instruments of all kinds to make his signature, genre-defying music. His haunting & melodic sounds are created through his incredible use of mandolin, guitar, violin and the upright bass; Nassuet brings them all together in a breathtaking style that highlights his amazing gift to make music that forms an instant connection, memorable experience and a lasting impact with listeners far and wide.
You can find the brand-new release of Hollywood, CA’s Nic Nassuet’s hit-singles “Black Dress,” “Immured”, and “The Nothing” on FM and digital stations around the country and throughout the world. With a true display of the songwriting mastery he’s developed and refined over his years of experience, “Black Dress”, “Immured”, and “The Nothing” provide a departure from the musical ‘norm’ and a full-blown excursion into the atmosphere and emotional depth of his music. With support and enthusiasm increasing daily for his music, Nic Nassuet is already hard at work once again, readying new material & pushing the boundaries of music for a new album release in Spring of 2015 and a tour in the Summer and Fall of 2015.

What is Nic Nassuet all about?
I am driven by a lust for knowledge, a drive to experience everything, and a quest for fun.

When did you start singing and writing?
I wrote my first song when I was four years old. I didn’t write another song until decades later. It will be on the album coming out this March/April.

What drives you to create & perform music?
I don’t know what it is, but there’s something there that pushes me. Maybe a mental illness, or some faulty wiring in the machine. It makes its own noises, and hears things from other places. This creates tension, and the tension is not relieved until there is some expression in three (sometimes four) dimensions. It was always there, I’ve heard it and felt it since I was a small child not even old enough to speak, but I ignored it and pursued other things as I got older. After our baby died the sounds and tension grew to the point that they threatened to destroy me unless they got what they wanted and were released into the world. I couldn’t contain it any longer and it drove me to write and perform.

Do you have any upcoming releases?

We have released four singles off of the upcoming CD “Eleutherious” so far. They have been well received and were nominated for, and won, awards. We will release one more single, a crowd favorite; “She Rides Moonlight”, later this month, and then the full CD will be released around the end of April. You can get updates on our webpage, as well as twitter, and facebook.

What can we expect to see from this new release?

You’ll hear some very unique music on the album – gravelly rock tenor vocals, crooning gothic duets, shining violin solos, crisp mandolins, and unique percussive sounds. It will be unlike anything you have ever heard before. After the release, we plan to tour in support of the album so keep an eye on our website for tour dates, or use the contact box there to let us know you want us to come to your town so that we can include your city, or one nearby.

Where can we find this release and your music?

Radio stations all across the US, and even some in Canada, Thailand, and the UK are playing the four singles that we have out right now. I put a list of the stations that I know are playing our music up on the main page of our website so you can check there for where to tune in. You can also request our music if your station isn’t playing it. In addition, you can listen for free on Spotify, or download from iTunes, Amazon, Google Play, Bandcamp, and at our website: http://www.nicnassuet.com

Will you be doing any performances?

Our official CD release party is April 29th at the State Social House on Sunset Strip. It is 100% free, so there’s no excuse to not come out and hear the album played live. We will be playing early enough to get everyone home before 10pm, so it won’t interfere with the schedules of working folks.

We’ve got a great lineup with an amazing violinist, Edward Hong, who will be coming fresh off of a recital at the Beverly Hills Playhouse, and a truly awesome bassist, Cat Arthur, who also writes music for a variety of well known projects in and around Los Angeles. Of course, the always astounding, Catrina Grimm will be lending us her angelic voice and playing hand percussion. It is really going to be an amazing show at a great venue right in the heart of the entertainment capital of the world, and you won’t have to pay anything to come and experience it.

We have a followup show at the world famous Dresden in Hollywood on June 1st. It is also free, and we should be announcing our tour dates at that show. That’s going to be a killer show too.

What is your recording process like?
I go into the studio with the music and lyrics. After I lay down those tracks we try to see what works and what doesn’t. Things don’t sound the same in the studio as they do live, so each song creates different obstacles that require different solutions. For instance, Josh at Sing Engine records where we recorded the album threw bongos in on “When it Falls”. I generally hate the sound of bongos, but it sounded great and fit the track really well. Totally different from how it sounds live.

Once I have the skeleton recorded I send the tracks to this amazing musician in France for the strings. Michael came into the picture on the first track. I had the lyrics and music recorded but I felt like something was missing. I was just scrolling through pages of musicians and I thought “Man, I love violins and upright basses, let’s see what that would sound like”. I had no idea who he was and knew nothing of his accomplishments at the time – like the fact that he’s led some of Europe’s most famous orchestras. When he returned the track my heart stopped. That was the sound I was looking for. Since then we’ve used Michael on almost every track.

What is your music about?
I’m not driven by one specific topic. Often times I don’t know what a song is about until after it is written. On this album there is a song about Santa Muerte, another one is a duet between a ghost and the man haunted by her voice night after night, one song is about a man who sells his soul at the crossroads. I don’t really have any control over it. Whatever comes out is what gets written about.

Is there a story behind your lyrics?
Each song is its own story, and has its own life. Each one comes from someplace different, gets put together differently, and takes on a different personality than the ones before and after, so yes, there is a story to every song.

Stephen Vicino is the founder of MusicExistence.com. He created this site to give talented musicians a voice and a way to be discovered.
@@svicino
Previous New Power Ranger Spoof Music Video from American Awesome Alliance
Next Interview with DJ NIXX