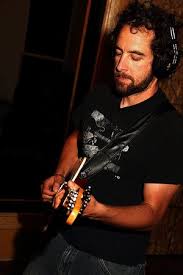 The Mailman’s Children, based out of Winnipeg, Manitoba, Canada, follow up their 2013 record “Supply & Demand” with 2015’s “The Spiders We Eat.” A very visual album title, I know. Birthed in 2000, TMC has gone onto appear on television and radio, all under the leadership of frontman Eric Labossiere.  “Spiders” is the fourth studio album from the band, preceded by this five song EP of the same name.

A few seconds into “Ride In Your Mind,” you’re not sure whether to slowly dance or close your head and nod to what feels like a deep reflection. There is a quality in Labossiere’s lower register that is seductive as there is a refreshing tone when he’s right in the middle. He uses them perfectly here. “This blinding cold rain, it covers my eyes/ Like boarding a plane the week of a crash I’m paralyzed.” Later, he sings, “And friends don’t want to come with me no more.” For the listener, the lyricist’s mind is a great place to visit.

“Private Room” allows the boys to go American Psycho on us, but hey, boys will be boys. This song was inspired by the Aurora, CO. shooting in which James Holmes pleaded insanity.  There is an Offspring-like fun to the track with a mixture of singing and shouting. “I’m coming down with insanity temporarily/ I stole my neighbor’s car/ Adultery by noon/ I just want to get away with it/ Let me go or give me a private room/ I’m not a murderer but haven’t you heard I’m crazy too,” goes the chorus. Maybe the trip to LABOSSIERE’s mind is a bad idea after all. Still, we venture on as Labossiere and company’s sheer audacity calls for more listening.

“Off to Work” is a great modern day anthem…for anyone who hates to work. Or maybe if you simply hate going to work for you office slaves. Perhaps it’s a theme for the millennials. TMC cleverly provides a lethargic effort here that fits the story perfectly. It isn’t that the song is bad, but Labossiere’s effortless singing, the monotony of the simple guitar chords, and the easy going tempo provide the visuals accordingly: workers sleeping at cubicles, kids lazy in bed on their tablets, and a fat dude working out at the gym without, well, the working out part. They sing: “You tell stories of what you will do/ You wake up and you don’t follow through/ Give me my dreams – don’t make me work for them/ Give me my dreams – don’t make me work/ No, I don’t want to work for them.” The lyrics details the generation today: Let’s make money by doing as little as possible.

Life is a lesson in humility. Sobering words by TMC on “Humility,” in which we finally get insight into the Spiders reference of the album name. It’s the band at their most US mainstream-ready. The EP ends with an acoustic and unplugged take of “Ride In Your Mind,” which is actually a preferred version as it allows the beautiful lyrics to live on their own, and you can appreciate the frontman’s vocals a lot more here.