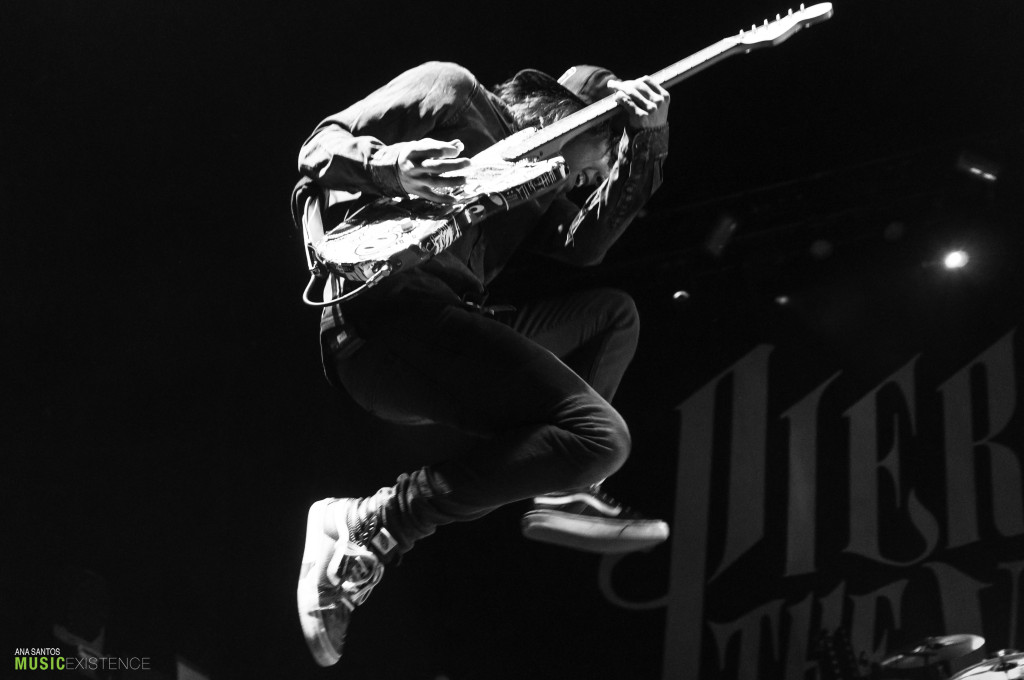 Pierce The Veil may still be a developing band on the scene, but their presence and musicianship is that of a seasoned act. Lead by frontman Vic Fuentes, the band’s energy is undeniable. They’re a frenetic force on stage, charismatic and interactive, their opening alone doused with the antics of a true rock n’ roll show.

They played to a sold-out crowd at NYC’s Hammerstein Ballroom, the band taking the stage behind a curtain silhouetted with the image of their latest album Collide With The Sky (2012). Sound queued up with the atmospheric intro to “Hell Above” and when the curtain dropped, the set blazed to life. Confetti cannons were bursting over a howling audience as the explosive drumming of Mike Fuentes coupled itself with a frenzied light show. Guitarist Tony Perry and bassist Jaime Preciado were immediately on the metal ego risers, headbanging wildly while the fans on the barricade screamed every lyric back at them. The first song was only the beginning, and it set the course for the night

The San Diego post-hardcore band released their debut album Flair For The Dramatic in 2007 and have risen to the forefront of the movement with impressive agility. They’ve gathered a fierce fan following, evident by the hundreds who braved hours on long lines in NYC’s frigid winter for a well-deserved spot on that barricade, and after seeing PTV live, it’s easy to see why.

It was a rare moment that either Perry or Preciado weren’t making eye contact with the rows of fans as if they were playing directly to them. Despite the large size of the venue, and the dynamics of the show, PTV still manages to create a level of intimacy with their performance. It sets them apart. That, and the now-famous split-jumps off the risers by Perry, Preciado and Vic Fuentes–sometimes in unison. Which makes for an impressive sight.

PTV continued to rouse the crowd through heavy-hitting fan-favorites like “Bulls in the Bronx” and “Disasterology”, slowing down briefly for acoustic renditions of “I’m Low on Gas And You Need a Jacket” and “A Match Into Water.” Through it all, Vic Fuentes remained incredibly humble; thanking the audience several times for coming out and confessing that the sold-out NYC show was one of the largest they’d played. In the spirit of giving back, Fuentes picked a lucky fan from the crowd to join the band on stage through the beginning verse of “Bulletproof Love”.

The last song of the set was probably no surprise to most, but it was certainly a delight. Sleeping With Sirens’ Kellin Quinn stepped out into a din of cheers, greeting tour-mate Fuentes with a hug as the intro to “King For a Day” ramped up. While it’s a great song on record, seeing it performed live as the collaboration it was meant to be gives the track new life. It really solidifies the fact that Quinn and Fuentes are extremely compatible vocalists.

Common to double-headliner tours, PTV’s set felt incredibly short albeit far from lacking. Fans clamored in a heightened state of euphoria after the house lights went up and the consensus was the same: Pierce the Veil put on a damn good show.

The World Tour continues on its second leg in the US before going overseas to Europe. See the tour dates below.

Check out our photo gallery from the show.