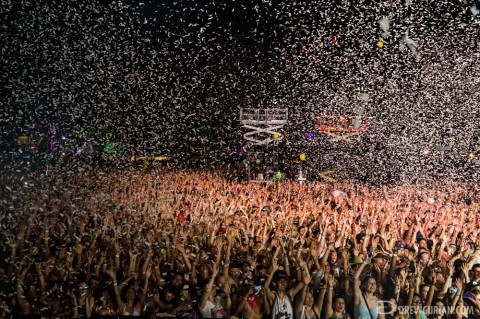 General Admission: Survival of The Fittest

Concerts are an adrenaline rush, and the closest thing to a sport I’ve ever been able to master. When some people talk about going to concerts, they mean getting to the venue as the show’s starting, getting snacks and drinks before finding their seat, and bopping their head to an artist they casually listen to.

This is not what I’m talking about. Concerts are like a challenge straight from the show “Survivor,”–actually, probably Real World/Road Rules more realistically–but instead of getting a huge feast or a bunch of cash for winning you get a good spot for the show. There’s levels to this. I get to the venue painfully early (like, 10 hours in 30 degree weather painfully early), make alliances throughout the line to both secure a good spot and bathroom privileges, and talk up security to establish a good relationship for information and special treatment.

Once the show starts, it’s all about a steady hand for picture taking and a strong shoulder for weeding through a crowd of people who apparently have no shame. This is something that comes with time, my sometimes timid personality goes straight to the trash when I get into concert-mode. After waiting hours in line, to then wait a few more hours once you actually get let into the venue, it’s every man for themselves. Being yelled at for pushing in front becomes something you learn to block out. Keep your head down and push forward and just remember, you’ll never see these people again.

Being in a general admission crowd, I have been punched in the face, kissed by random dudes (ugh), had my phone violently thrusted out of my hands, and the thought “I could faint right now and nobody would know because my body would still be upright since we are so tightly packed” has gone through my mind multiple times. It’s all a part of the game. If Muhammad Ali quit after the first time he was punched in the face, he wouldn’t be Muhammad Ali. That’s a terrible comparison…I’m so sorry…my point is, enduring the pain is all a part of the game and makes your front row spot a badge of honor.

Once that music begins, there is no better feeling than being in a stadium full of strangers, all singing in unison and rejoicing in a common love of music. Going to concerts makes me a little less cynical and I almost forget that I have an overpowering dislike of most people as I’m packed in a room full of thousands of them.