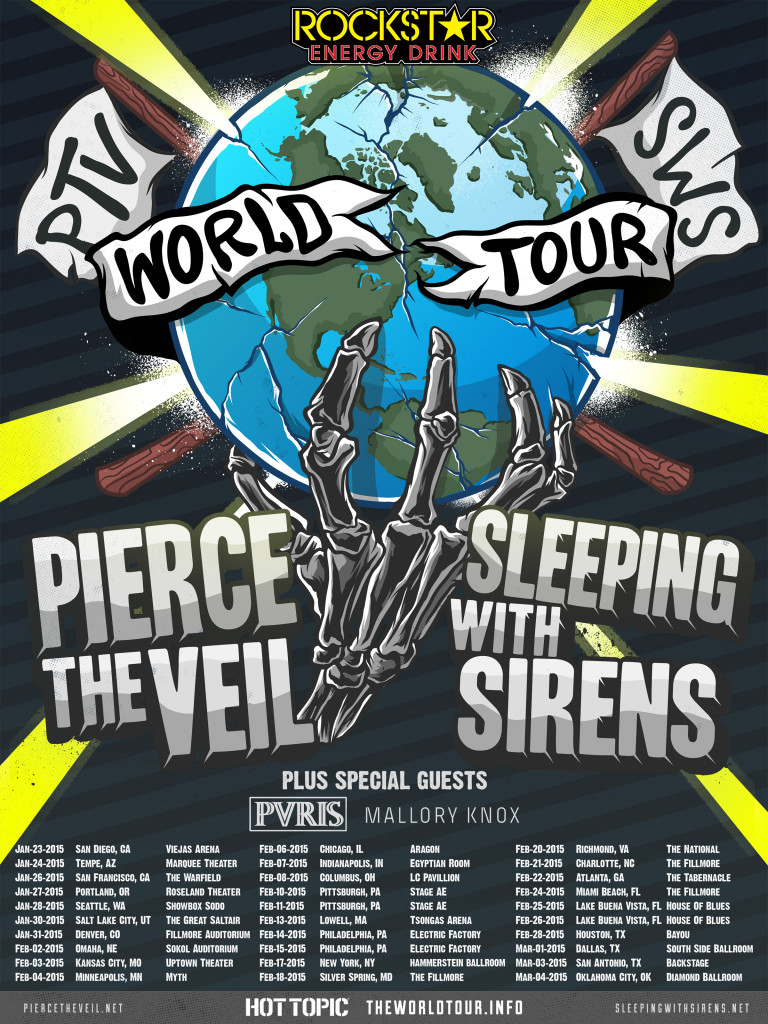 Pierce The Veil & Sleeping With Sirens – The World Tour 2015 Trailer

With Leg One a complete sell out, Sleeping with Sirens and Pierce the Veil are well into Leg Two of their five-month co-headline trek, “The World Tour,” presented by Rockstar Energy Drink. If you’re a fan of great songs and musicianship, clean and stunning production, and a high-energy, electrifying live show loaded with intense band/audience synergy, then this tour is a do-not-miss.

MusicExistence will be covering the upcoming New York City show on Feb 17th at Hammerstein Ballroom.

You can get a taste of what to expect in this brand new video clip:

Armed with a brand new Gold Single, the “Best Live Band” trophy from the 2014 Alternative Press awards, the headline slot on the “Self Help Festival,” the A Day to Remember-founded event that is set to take place on March 7 in San Bernardino, CA, and some extraordinary social media increases, Pierce the Veil is a developing band to watch in 2015.  tour dates, Pierce the Veil has been focused on finishing their new album, the Dan Korneff-produced follow up to 2012’s critical-acclaimed, award-winning breakthrough “Collide With The Sky.” The new album will be released this year, and, according to vocalist Vic Fuentes, “We decided to take our time with the new album. We’ve been so moved by the support our fans have given us over the past few years, it’s become that much more important to us to make the very best album for them that we can.”

With no new album or tour during the first 10 months of 2014, Pierce the Veil capped off last year with social media growth that was remarkable, illustrating the band’s exceptional and expanding fan base. Between late August and the first week of January, the band racked up nearly 80,000 new Twitter followers (now 1-million-plus, in addition to the 2.5-million followers the four individual band members have collectively), 191,837 new Facebook likes (now 2.960-million), and their music video for “King For A Day” (featuring SWS’s Kellin Quinn) has gone from 33-million views to an astounding 41-million-plus views (bringing PTV’s total YouTube views to more than 84-million). Plus, in its year-end review, Tumblr announced the top 20 most reblogged bands, placing PTV at #6 and aligning their social media popularity with Platinum and multi-Platinum-selling bands 5 Seconds of Summer, One Direction, Fall Out Boy, My Chemical Romance, and All Time Low. And PTV is still a developing band.

Sleeping With Sirens has been preparing for the release of their fourth album, working with producer John Feldmann (The Used, Panic! At The Disco, Good Charlotte). “Kick Me”, the first new single released in late 2014, peaked at #1 on Billboard’s Trending 140 chart. The music video for “Kick Me”, filmed with fans at an intimate London show last fall, has cumulated over 3 million views. The band kicked off 2015 by offering new track “We Like It Loud” as a free download to fans for a span of 24 hours, garnering over 50,000 downloads.

Even with 102 million streams, 83 million music video views, millions of social media followers, hundreds of thousands of tickets sold around the world, over 715,000 in combined album sales and a #3 debut on Billboard’s Top 200, Sleeping With Sirens maintains a firm grasp on their musical identity, with an authenticity that draws bigger and bigger crowds. “The biggest foundation for all of us in the band is to stay true to ourselves,” declares Kellin Quinn, “We all sleep well at night knowing these are the songs we believe in. Our focus was in putting out an album like the ones we grew up listening to, the music that changed us.” Fans can expect new music from Sleeping With Sirens soon.

Confirmed dates for Legs Two and Three of “The World Tour” are as follows: