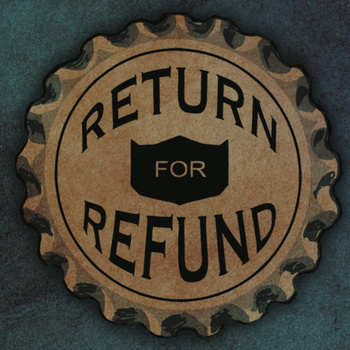 Return For Refund sound like trouble. Not trouble in a bad sense, but they just seem like a group of dangerous dudes. From the content on their debut EP Return For Refund to the heavy riffs and pulsating percussion, Return For Refund have an undeniable attitude problem. The Canadian trio of vocalist Drew Clementino, guitarist Sasha Molotkow and drummer Karlis Hawkins has put together six songs of hard rock that is already performing well on college rock stations.

Drawing inspiration from other hard rock/grunge bands such as Soundgarden, Nirvana and Black Sabbath, the band delivers tight knit hard rock that you can tell comes from the heart, their experiences in life and their work in other bands. Lead single “The Fields” features the distinctive gritty delivery of Clementino, which during the chorus sounds like the spawn of The Offspring’s, Dexter Holland. During “TV Light,” it is impossible to not fall victim to nodding your head to Karlis Hawkins well-equipped snare. Meanwhile, the MVP of the entire EP is Molotkow for his original and charismatic guitar playing.

The band seems to have found what works for their separate expertise and they are left with a great product. This is just the beginning for Return For Refund. With such an impressive debut EP, hopefully a new full-length album is just around the corner.