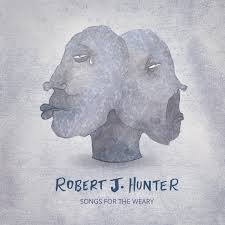 Album: Songs for the Weary

Having supported the likes of Wilko Johnson, Josh Kumra and HeyMoonShaker and influenced by great musicians and iconic bands such as Peter Green, Tom Waits and The Doors, Robert J. Hunter is no stranger to the stages and music having started in the scene at young age of 14, here´s a musician that since to grow in every record as an artist but also as a consummate performer. Proof of that is his latest effort Songs for the Weary.

The album kicks off like every real rock and roll album should, with awesome and catchy riffs and Hunter´s hoarse vocals, typical of old blue artists or Scott Stapp and guitar swag reminiscent of great guitar heroes such as Jimmy Page, Jack White and Jimmy Hendrix. Next single ¨Demons¨ is an aggressive, powerful song where Hunters vocals blends with catchy melodies, when Robert starts screaming it gives a really metal vibe that turns this simple track into a monster. As we listen through the record, there´s no doubt this is a really eclectic rock album which is something rare to find these days. Hunter´s vocals really stand out and you can hear the aforementioned influences in the first paragraph really play a big role in his music.

I am not sure if this will be a negative thing but more like a constructive commentary. While his vocals is phenomenal and really gives a special and angry touch to a genre that´s all about the anger and strong emotions, I personally think he sometimes over react and I found myself laughing here and there. Maybe I am a childish man, but the roars brought memories from a show we all are familiar with: Scooby Doo. Sometimes he sounded like Scooby Doo, I wanted to take him seriously but I couldn´t because his overreaction. The thing I enjoyed about songs like ¨Demons¨ was because he was able to when to scream and when to sing. He had a vocal control. So yeah, not trying to offend Robert but that would be my only recommendation; I really enjoyed the hoarse vocals, but know when to sing and when to let your anger take the best of you.

But overall, what I love about this album is that with a genre that´s dying (Yeah, I know we will like to think Rock and Roll is not dead, but it is and we are not doing anything to stop happening), Robert is doing the best he can to bring it back to life. He really has that blues elements that inspired the likes of the Rolling Stones, The Who and The Doors to create this wonderful music. Besides my constructive comment above, the music is simple yet catchy and I am sure many people will really enjoy and appreciate. There might be a long road to fame, but Hunter is definitely on the right direction.