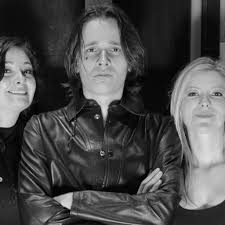 Born in Saint Petersburg, Russia, and raised in Vologda, a small city a few hundred miles from Moscow, artist Ivan Smirnov was heavily influenced by the American/British rock scene and started writing his own musical material in English at the age of 8. While studying classical piano for five years, Ivan also picked up interest in the guitar and by the age of 19 he had an independent, self-produced album under his belt. Inspired by legendary artists like John Lennon, Freddy Mercury, David Bowie, Steven Tyler, and Russian classical composers, Ivan strived to immortalize his feelings in his music and create a new feeling of rock for his followers which he decided to call ‘Blitz-Rock’. Eventually Ivan found other great musicians that helped him archive his dream and give some shape to his new sound. Years later, Smirnov and co. now under the name of Privet Earth bring us their latest effort ¨Breaking The Ice¨.

The first single ¨Ice Orkestra¨ reminded me in the intro to Disney´s Frozen, though this eventually changes and this sweet and awesome symphony blends with Ivan´s fierce, really punk vocals that resembles vocalist Benjamin Kowalewickz and Freddy Mercury. ¨Forest Queen¨ has the same vibe as the first track though this is less aggressive and more ole school rock n roll, in the veins of Boston. With ¨Big City¨, the band takes us to gold days of New Wave with some Rush in it, it´s impossible to just not stand and start dancing all over the room with its upbeat melodies. As you listen through the album, there´s two things we know for sure: band is an old soul and this sound he created it´s really eclectic.

Top tracks – Big City, Give it to the Wind, Evrika.

There´s isn´t really a negative comment, I think this an album that from different music taste will be able to appreciate – especially if you are one of those people that thinks today´s music sucks (totally understandable) and enjoy spending his time listening to the old classics, this band will really bring some great memories of what I hope was a great decade/time in your life. The production work is really great; the string arrangements really add a beautiful and lovable touch to each track that, at least for, makes them really special.

In the end, and in all honesty, though many people from a wide range of musical tastes will be delighted by this album and their sound, some will not be able to appreciate and might hate. Maybe will start comparing the vocalist and say this is an attempt of X music act which I can´t deny in some occasions Smirnov was (unconsciously or not) try to sound like his music hero, I think if you really pay attention to the songs and open your mind and stop playing the ¨music nazi¨ game, you will be able to enjoy from a record that really worth a listen.