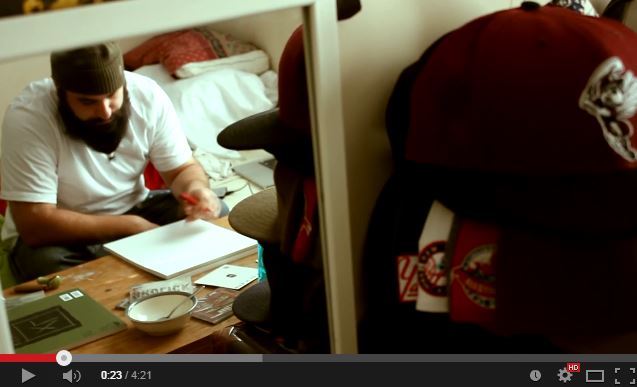 Westchester, New York-bred, Savannah, Georgia-based emcee Miggs presents the KNife-directed music video for “Illest Illustrator”, the new Chandelier-produced single from his new solo debut album Son Of A Gun on Savannah-based label Dope Sandwich Productions, whose roster also includes F.E.B. and label head KNife. Son Of A Gun features guest vocals from KNife as well as Werd Life, Obeah, Kontent and Miggs’ brother Freak Tha Monsta, who produced almost the entire album. One video from the project has already been released (watch “Knowhateyemean?”). Miggs dropped his first mixtape in 2009, soon joining 8-piece band Word Of Mouth, which contributes live instrumentation and vocals to Son Of A Gun. Miggs has shared the stage with Masta Killa, Curren$y and Skrillex. “This track is like a quiet gem,” says Miggs. “It was the one song idea that I’ve been harboring the longest, since illustration (drawing) is my first passion. The video is as low-key as the song itself and shows some of my artistic influences.” Son Of A Gun is out now on Dope Sandwich Productions.

Stephen Vicino is the founder of MusicExistence.com. He created this site to give talented musicians a voice and a way to be discovered.
@@svicino
Previous Nevada Rose Announce First Tour of 2015 with The Paramedic
Next Knuckle Puck Signs WIth Rise Records