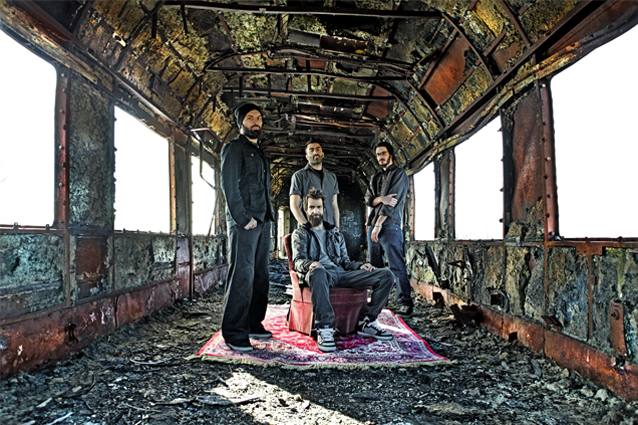 Me: Let’s start with the band itself—Maplerun. How did you all meet? What’s the story behind the band’s name?

Nick: Me and Chris (drummer) used to play in a high school band together. When the band broke up, we decided we wanted to make our own band and play the music we love. Along the way, we brought Orestis (guitarist) into the band, who I actually met in a bar—we were both shitfaced from drinking and thought it would be a good idea to jam together! Our latest addition would be our bass player, The Moor, who we met through the Internet. After playing with countless bass players, we met The Moor and immediately knew he was the right man for the job. Initially, our band was called Headtrip. When we found out that name was already taken, we chose the name Maplerun out of a John Grisham book called The Summons. Maplerun is the house that the protagonist grew up in.

ME: Although Maplerun officially debuted in 2007, the band describes 2003-2006 as a period of “nothing but music” for a group of friends. How did this time period shape you all as musicians? At what point did Maplerun the band become a reality?

Nick: The period between 2003 – 2006 was a magical period for our lives. Chris, Orestis and myself would jam endlessly in order to find out who we are and where we wanted to go with our music. After playing songs from our favorite bands, we decided to write our own songs and see where that would take us. Throughout this period, we shaped our friendship, our sound, our first songs and had the time of our lives. When we gathered a significant number of songs that we really liked, we decided to go into the studio and record them – just for us and our friends; that was the plan. Whilst in the studio, we got offered a contract from a well-known Greek record label and decided to sign up and give it a go—I think that was the point where Maplerun became a reality.

ME: Musically, Maplerun has a very diverse sound. What musicians inspire you individually and how does each member’s own personal taste contribute to the  sound of the band as a whole?

Nick: Each member of Maplerun likes different styles of music and this is the foundation of our diverse sound and the way we approach songwriting. There are many bands who we all listen to—Metallica, System of a Down, Deftones, Godsmack, Alice in Chains—just to name a few, but each one of us also likes different styles of music. Each member adapts his sounds according to what each song or album needs.

ME: In September 2007, you began recording your debut album, House On Fire. After years of playing together, what was the creative process like this time around? What inspired the sound of House On Fire? How did the process compare to years before when the four of you only played for fun?

Nick: The creative process for House on Fire was real fun, without any stress or deadline. After years of jamming, we chose our best songs; we transformed them into recording material with slight or enormous changes and went into the studio to record them. The sound of House On Fire is a reflection of ourselves at that period combined with a professional view given by our co-producer, Buttons. It is certainly different just to play music for fun than to create actual songs that will be recorded and heard by other people. However, both involve playing music—our favorite thing in the world.

ME: In earlier years, Maplerun was an entirely self-produced band. How did the band get its name out there to the public? Did you encounter any major challenges along the way?

Nick: By all means possible—we played gigs everywhere (in our home country, Greece and the rest of Europe) in order to create a fan base, get reviews and meet new people. We advertised in magazines, radios, webzines, we played TV shows and we reached out through social media (MySpace was really hot at the time). With regards to challenges, we encountered many and still do so. The key is to be true to yourself and want the absolute best for your band and band members. No matter what, you have to sacrifice.

ME: After the release of House On Fire, Maplerun enjoyed a swift rise in popularity—touring throughout Europe, radio play, your music videos enjoyed heavy rotation on MTV Greek, you were invited to the MTV Greek Headbanger’s Ball and your single, “For You” was the first Greek metal song to be on the PS3 game, Rock Band. That’s pretty impressive for a debut. So far, what stands out as one of the band’s proudest moments?

Nick: We feel really proud for each and every achievement—from the smallest gig to touring Europe—and none of that would ever happen without the support of our friends, fans and families.

ME: How has life changed for you since the band’s debut? Was fame something you found challenging to adjust to or has life remained the same?

Nick: Life hasn’t changed at all. We are not famous. Yet.

Nick: Touring is our favorite part of being in a band. You get the chance to travel to many places, present your music to different audiences every night, to meet new people and to have endless fun. We have played three European tours so far—with Shadow Gallery, with American Head Charge and RSJ, with Soil and Skindred, and each and every night had its own story. Bands, venues, alcohol, crowd, music, the endless road, flying midgets and abandoned hotels in the middle of nowhere—you name it.

ME: During your 2010 tour, Maplerun recorded a demo version of “Nails”, which would appear on your sophomore album, Restless. Restless has a heavier sound than House On Fire. What inspired the sound of Restless? How did the creation of Restless compare to the creation of House On Fire?

Nick: Restless is definitely a heavier album than House On Fire – that’s just how our music evolved. Its sound is inspired by all our favorite heavy bands – Slipknot, Stone Sour, System of a Down. Due to bad decision-making, the recording & production process of Restless lasted almost 3 years. Having to join the army (which is mandatory in our country) for 9 months and also working with a producer that didn’t meet our expectations resulted in losing a lot of valuable time. Because of all the above the creation of the album was a torture really – nothing like House On Fire.

ME: Recently, Maplerun signed to American label, Pavement Music. Now that you’ve officially broken into the American market, what is next for the band? What do  you hope to achieve? Can we expect an American tour sometime in the near future?

Nick: We are very happy to be signed and represented by Pavement Music in the US. We truly hope that the American audience will dig our sound and songs. This will allow us to tour the States and possibly release our next record there in the future. Can’t wait.

For the latest news and music on Maplerun, check out the band’s official pages: