All That Remains Presale “The Order of Things” Begins TODAY!

Following the recent announcement of their highly-anticipated seventh studio album THE ORDER OF THINGS, which is set for a February 24, 2015 release, Razor & Tie recording artists ALL THAT REMAINS are offering a variety of CD, vinyl and digital preorder options that can be purchased via the band’s website www.allthatremainsonline.com. A unique look at THE ORDER OF THINGS album artwork (revealed just last week) as well as the band leaked first track “No Knock” can also be viewed on the band’s website.

Preorder “The Order of Things” now on iTunes & Amazon!

On THE ORDER OF THINGS, the Massachusetts outfit – Phil Labonte (vocals), Oli Herbert (guitar), Mike Martin (guitar), Jeanne Sagan (bass), and Jason Costa (drums) – preserve an ethos of evolution. Tapping Josh Wilbur (Lamb of God, Gojira) to produce the new music, they recorded the bulk of the material in their home state of Massachusetts and fine-tuned the vocals in Los Angeles (the previous four albums were produced by Killswitch Engage’s Adam D). “It was a good time to try something different with someone new,” affirms guitarist Mike Martin. “It was helpful to have a completely new perspective. We had crazy chemistry working together right away. He made a gigantic difference across the board.” Adds vocalist Phil Labonte: “Josh brought his own angle of what All That Remains sound like and could sound like. It’s a mixture of those two elements. That’s what this record is.”

Formed in 1998, ALL THAT REMAINS continues to evolve while maintaining their grip on the forefront of 21st century hard rock. Their last album A War You Cannot Win debuted at #13 on the Billboard Top 200 and its singles “Stand Up” and “What If I Was Nothing” secured the #1 and #2 spots respectively on Active Rock radio. Their position at the top of Active Rock radio remains indisputable with six singles reaching Top 10 at the format, three of which went Top 5 or higher. Their worldwide album sales exceed over one million, while track sales surpass 1.5 million. However, ALL THAT REMAINS continue reacting at every turn, igniting a personal revolution in the process.

Expect a big North America tour announcement in support of the album in the next few days.

Tags All That Remains The Order of Thins

Stephen Vicino is the founder of MusicExistence.com. He created this site to give talented musicians a voice and a way to be discovered.
@@svicino
Previous Unearth at Altar Bar on 12/11/2014
Next Great Hip Hop Albums of 2014 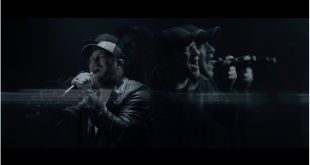 All That Remains Releases New Video For “Just Tell Me Something,” Featuring Asking Alexandria’s Danny Worsnop.