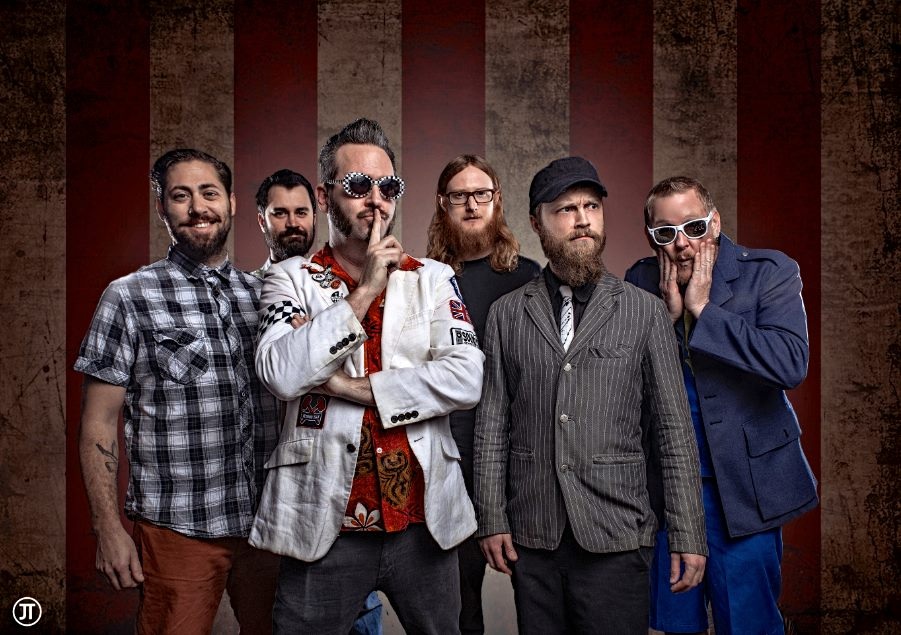 Remember the horns? Remember skankin’ around your living room listening to “Sell Out”, “Beer” and countless others? Those were good times back in 1996 and 1997 when the ska/punk explosion took over. Reel Big Fish were the leaders. They pioneered a musical style back to the public eye that hadn’t seen the light of day for quite some time. The bands self-deprecating humor and big choruses were infectious and nearly two decades later, they remain that way.

The genre has taken a back seat over the years, but the band continues on and has been releasing quality albums ever since the mid nineties. Their live shows have become a spectacle. The on stage banter is just as entertaining as the music as Reel Big Fish produce album after album of fun, catchy, danceable ska and rock music that you can throw on repeat for days.

The band is returning with a new holiday EP entitled Happy Skalidays due out December 15th. I recently spoke with lead singer and longest tenured member of Reel Big Fish, Aaron Barrett, about the new album and what it felt like to be the front-runners of a genre back in the nineties.

Me: Happy Skalidays will be a 6 song Holiday EP coming out on December 15th. Will this be covers of popular holiday songs or original holiday tunes? What are some of your favorite holiday songs?

Aaron Barrett: There are a few old classics and a couple of original RBF holiday songs in there too! I think people would have been disappointed if we hadn’t written any originals for this.

I love Christmas music; I always have since I was a kid. I listen to it all year round, so I’m very excited to finally record my own Holiday album!

Me: You’ll be hitting the road in 2015 with fellow ska/punk rockers Less Than Jake. How did the idea of getting the two bands together for a tour come about?

Aaron Barrett: Well we were both a big part of the 90’s ska punk explosion and have always shared a lot of the same fans who love both bands. We also have always been fans of each other’s bands and been pals forever so getting our 2 bands on tour together is one of these “no brainer” situations you always here about.

Me: How important is it to bring bands on tour with you that you enjoy yourself? I’ve seen you play with Goldfinger and a slew of other bands; it must be an awesome feeling to be able to tour the country and world with your friends, right?

Aaron Barrett: It’s awesome to be able to tour the world with friends and with bands you really like. We always try to get bands that we like and are friends with and most importantly that our fans will really like! We always want the whole package to be a good entertaining show for the kiddies.

Me: What were some of your influences when you were a kid and just getting into music? Do you remember that moment when you realized you had the opportunity to play music as a full-time job?

Aaron Barrett: I was always into hair metal and reggae and all that amazing pop music from the 80’s. I think I realized that music was going to be my full time job when we headlined a local ska show in Orange County, CA in front of 1000 people and they were all going crazy and singing our songs. I knew that we were definitely going to do something big with this. I was supposed to work the next morning at 8am at Subway Sandwiches but I said “Screw that, I’m gonna be a rock star” so I never went back! Haha.

Me: When you reached mainstream success with “Sell Out” and the album Turn the Radio Off back in 1996, were you surprised at how quickly things took off after that and all of the ska bands that got big around that time?

Aaron Barrett: It was a pretty incredible time in the mid 90’s watching the ska scene get bigger and bigger. You could definitely see that something big was going to happen and then in 96-97, BOOM! It just exploded.

Me: The album Cheer Up! saw Reel Big Fish focus more on rock oriented songs and has produced some great staples for your live shows. Was that a tough decision to make to put the horns more in the back seat or was the band fully on board with the decision?

Aaron Barrett: I think everybody was on board for writing some different kinds of songs. We had already put out two 16-song albums of ska punk so on our third album we just wanted to experiment a little bit. There was still horns on just about every song, and still a lot of ska but we did do a few rock songs and take some things in different directions. I think it’s good for a band to be creative because you don’t want to just write the same song over and over, why even record a new album if you’re going to do that.

Me: Reel Big Fish seem to release some new material every two or three years, How does your creative process work? Are you always in writing mode or is it a conscious effort to give fans new songs every couple of years?

Aaron Barrett: I’m always writing songs but it takes me forever to finish them so whenever I have enough finished in my head for an album, we all get together, learn and record them.

I never really sit down with a guitar and try to write a song, I do it all in my head. I wait for ideas to pop in and then I just work on them in my head, I never record demos or write anything down. If I can’t remember the idea then it must not have been that good.

Me: The music industry itself right now is somewhat chaotic. What do you think of all the streaming services and new ways for bands to promote music? If Reel Big Fish were just starting out today and were looking to be heard, which avenue do you think would be the best one to start with?

Aaron Barrett: There are definitely lots of ways to get your band heard these days, I think we’d do the same thing we’re doing now if we were just starting out, Using Facebook and Twitter and YouTube and all the social networking sites to connect with people. That’s the thing about the way it is now, there is a lot of competition and a lot of information constantly coming in and things to distract people so you have to constantly engage them and remind them your band exists!

Me: Hypothetically: No one knows your band. You’re asked to play one Reel Big Fish song that will be broadcast to the entire world simultaneously. Which RBF song do you choose to share with the entire world?

Aaron Barrett: Wow, that’s a tough one! Probably “Beer” since everybody knows that is the best song in the world and needs to be heard by everyone! Haha.